We left off in Part (1) noting the sagitta formula:

So that the radii  sm   of the Fresnel zones are such that:

Then the area of any one zone can be expressed:

To the approximation considered, the area   is therefore independent of m .  (A more exact computation would disclose that the area increases only very slowly with m.)  Continuing, on, the phases of the wavelets from a given zone will not differ by more than p, and since each zone is on the average  l /2  further away from P, then it follows successive zones will produce resultants at P which differ by p,    This difference of a half period in successive zones is the origin of what we call "half -period zones."  If the resultant amplitude from the light of the mth zone is given by  A m  then successive values of   A m  will have alternating signs (in a series) because changing the phase by p  means reversing the direction of the amplitude vector.  If the resultant amplitude of the whole wave is A then we can write it:

Where k = const., d m is the average distance to P  and q  is the angle at which light leaves the zone. Going back to the area of any one zone:

Which causes successive terms to decrease very slowly. But-  the decrease is slow only at first, but because of the rapid change of m with q the amplitudes soon become nearly equal.  Let m be odd then:

If m is taken to be even the same method shows:

Thus we find the resultant amplitude at P due to m zones is either half the sum or half the difference in amplitude, i.e. due to the first and last zones.

In the case of considering a circular aperture in Fresnel diffraction it is useful to return to the half -period zone diagram from Part 1, e.g. 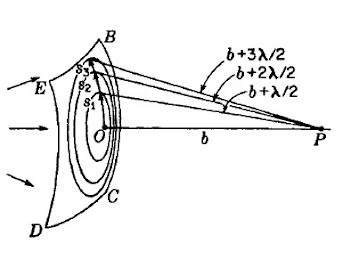 Under consideration is the effect on the intensity at point P of blocking off the wave by a diffracting screen pierced with a small circular hole or aperture. The diffracting screen itself and the point P are depicted below, and also in expanded view: 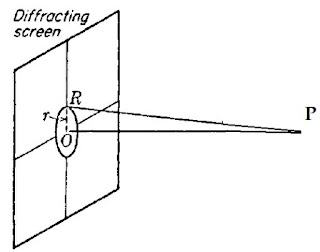 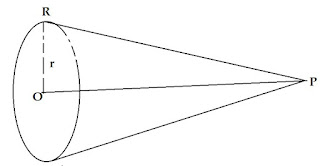 Let the radius of the hole r = OR as shown, and also let it be made equal to the distance s 1  i.e. to the outer edge of the first half-period zone. Then the reckoned amplitude will be A 1 or twice the amplitude for the unscreened wave. From the inverse square law for light the intensity at point P will then be 4 times as great as if the screen were absent. On the other hand if the radius of the hole is increased until it includes the first two zones the resulting amplitude is A 1 -   A 2  or practically zero.  The intensity has fallen to near zero on account of increasing the radius of the aperture.  Further increasing r will cause the intensity to alternate through maxima and minima each time the zone number m becomes odd or even.

Consider now, from the same diagrams above,  point P at an initial position from the screen such that PR - PO = l /2.  Point P being moved toward the screen then increases the path difference with successive, zones, i.e.  D 2 =   2 l /2 (2 zones), D 3 =3l /2 (2 zones), and so on.  Successive maxima and minima thereby occur continuously along the axis of the aperture and this has the same effect as increasing r in the earlier context.

In now considering the substitution of the foregoing circular aperture with a circular block or obstacle (e.g. coin), we encounter a surprising result. That is, we now expect a bright spot to appear in the center of the occlusion area or shadow.  For example, in one experiment at Harrison College a Barbadian 5 cent piece  (left below) was used for occlusion and the image below right was obtained:

The students were flabbergasted and inquired as to how a bright spot could appear at the center of an obstructive shadow. I beckoned them to consider an optical wave function or disturbance at P  (call it U p ) and recalled the earlier format for amplitudes and thereby recasting the wave function disturbance, i.e.

And note the decrease in U with increasing n is extremely slow, i.e. the value of any U n is approximately equal to the mean value of the adjacent U, hence the terms in parentheses simply cancel.Thus, ½ U1. denotes the optical wave disturbance at P when there is no aperture at all.

But what if a coin or circular block is placed where the circular rectangular aperture is? As my brightest student responded: "Well, the Fresnel zones now have to start at the edge of the coin because the hole is covered!"  Nice. What else? What effects follow?  "Well the value of the wave disturbance U p  is then just ½ U1  or half the contribution of the unobstructed one! So the center of the shadow of a circular opaque object must show a bright spot!"

And further, the irradiance at the spot is very nearly the same as if there'd been no occluding coin or disc.

It is also possible to pose analysis for a circular aperture in terms of  the Fresnel-Kirchoff  (F-K) equation for the primary wave- which will also include the complex wave function, U a*

where n, r denotes the angle between the vectors n (normal to aperture) and r. The applicable geometry is shown below: 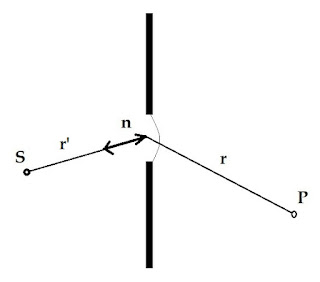 Here, the surface of integration is taken to be a spherical 'cap' bounded by the aperture opening.  In this case r' is constant and cos (n, r') = -1. In this case the F-K formula reduces to the double integral form above, where:

Then the total optical wave disturbance at the target point P is obtained by summing the secondary waves for each element.  But...in this summation it is necessary to take into account the obliquity factor, i.e.

Thus, the bright spot produced by a zone plate is so intense it acts much like a lens. Say the first ten odd zones are exposed.  This leaves the amplitudes: A 1, A 3 ,  A 5,   ... A 19 .  The sum of which »   10 A 1 .  The whole wave front gives ½ A1  .  So that using only 10 exposed zones we obtain an amplitude at P twenty times as great as when the plate is removed.  The associated intensity is then 400 times as great. The 'object' and 'image' distances then obey the ordinary lens formula, since from earlier radii eqn:

In Part (3) we will see how the Fresnel analysis can be developed for a rectangular aperture, using the appropriate geometry, to obtain useful functions and results.

1) Consider a circular aperture with center at 0, and n zones comprised of essentially equal areas a i .

a) If the n zones are even estimate the total amplitude.

b) If the n zones are odd, estimate the total amplitude.

2) Show how the obliquity factor:

Posted by Copernicus at 5:53 AM