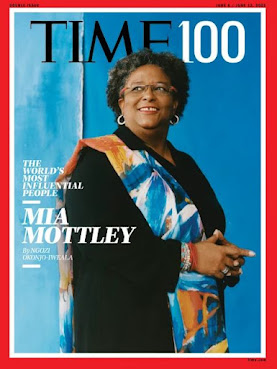 Janice ran excitedly into the living room yesterday morning, exclaiming: "I have never been so proud of Barbados!  Look at this image Trudi (our niece) just sent me!"
There,   gracing  the cover of TIME magazine, was the image of Barbados Prime Minister Mia Amor Mottley.  This was for the "Time 100"- at least one version of the covers that will circulate the world. This was obtained in Barbados).  TIME's 100  looks at the 100 "most influential" people, leaders etc. in the world over 2021, i.e. who had the most positive influence in shaping it.
When Mia was first elected 5 years ago - and her  BLP (Barbados Labor Party)  assumed control by a 50 -0 majority-  it came on the heels of the reign of a moribund, exploitative DLP (Democratic Labor Party).  The country then had seen its economic nadir with an enormous debt - to the IMF-  and a junk bond rating,  e.g.
This wretched fiscal condition continued into Mia's first term but she and the party worked diligently to correct it, including lessening capital outflows with new regulations.
What precipitated the huge wins, including another 50 - 0  parish by parish blowout this past January? Well, most likely Bajan citizens saw how their nation was being slowly unraveled by increasing debt and ever lower bond ratings. See e.g.

Soon after their first  election win (in 2017), the new BLP - with access to all financial records - truly grasped the parlous state of the nation's finances. Prime Minister Mia Mottley indeed delivered a "mini-budget"  speech outlining the belt tightening ahead.   She also telegraphed a warning message over the opposition party's bow in her first post-election presser, averring:

"It is a woeful state of affairs, and anybody who presided over this really needs to answer to the country for what in my view is a dereliction of duty that is unparalleled since independen­ce.

This country is in need of serious, urgent action with respect to its economy and its government. Our foreign reserves are at a tenuous stage … We have a state of affairs where our deficit is unacceptably high. Indeed our debt represents the third highest in the world after Japan and Greece”.

Mottley in her first ever post -election media briefing went on to note that the island's statutory corporations owed tens of millions as of September, 2017 when the books were updated.  Specifically, the Barbados Water authority was $70m in debt, and the Caribbean Broadcasting Corporation (the state-owned service) was $125 m debt. Mottley also referenced $621.4 million in wire transfer outflows, which clearly led to the island's coming within 6 weeks of exhausting its funds (e.g. to pay wages, pensions) by the end of June.

Within a week of PM Mottley's budget speech we realized how serious the situation in Bim had become when Janice called our bank (Scotia) in Barbados and asked why her  pension money had not been sent to the U.S. We were informed that new foreign exchange rules prohibited any further wire transfers  of National Insurance pensions (equivalent to Social Security in the U.S.) and the beneficiary would have to show up in Barbados each month to claim that month's pension. Of course this was totally unrealistic and impossible for a number of reasons, not the least of which is that the airplane fare alone would cost more than the monthly pension.  The only alternative was to leave the money in a checking account there, which also worked to pay Barbados taxes that Janice owed on her pensions each year.

More recently, Kevin Greenidge, Mia's finance minister, noted the country has now rectified the previous party's fiscal mismanagement to the point  of bringing Barbados back to a 2008 economic growth level.  (But Mr. Greenidge warned it was more a 20 year rollback of growth, much of that because of the pandemic as well.)

In October last year, Mia earned kudos when she delivered a magnificent UN speech, which those interested can watch here:

As she thunderously proclaimed:

“We are waiting, waiting for global moral strategic leadership.  How many more crises need to hit before we see that the international system divides, not lifts?”

In his TIME 100 tribute to Mia, Okonmjo Iwelala, director-general of the World Trade Organization, wrote:

There are some who stand tall and stand out no matter where they are from—whether a large, densely populated country or a small island nation. Prime Minister Mia Mottley of Barbados is one such person. Bold, fearless, and possessing a great intellect and wit, the Prime Minister is a brilliant politician who knows how to shake things up.

Mia Mottley has always cared deeply about critical issues impacting the world. From poverty to debt to climate change, she is a vocal advocate on the world stage for responsible stewardship of our planet, so that nations large and small and people rich and poor can survive and thrive together. At COP26 in Glasgow late last year, she chided the world’s leaders for not working more diligently to limit the potential catastrophic impacts of climate change, telling them to try harder. While chair of the World Bank and the International Monetary Fund’s Development Committee, she reminded the world’s finance gurus that the level of a country’s per capita income may not always be the best measure of its wealth. After all: one climate-change-induced hurricane can take a significant toll on that wealth.

Mia Mottley strides boldly on the world stage. She is an embodiment of our conscience, reminding us all to treat our planet, and therefore one another, with love, dignity, and care.

Posted by Copernicus at 7:24 AM