Why Has CO2 Concentration Set An April Record Despite Earlier Slowing Growth In Emissions? 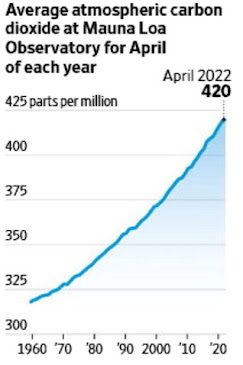 Few may realize that the rate of growth in carbon emissions actually slowed from 2.1% per year in the early part of the 21st century to 1.3% per year between 2010 and 2019, this according to the latest IPCC report.  Yet despite this, the concentration of atmospheric CO2 set a new high in April (see graphic above). According to measurements of the heat-trapping gas at an observatory on Hawaii’s Mauna Loa volcano, the level of carbon dioxide in the atmosphere reached a record high of 420 ppm  in April.

The unsettling reading was the highest since monitoring of atmospheric carbon dioxide began 64 years ago.  This according to Pieter Tans, a senior scientist at the National Oceanic and Atmospheric Administration’s Global Monitoring Laboratory in Boulder, Colo. The previous high at Mauna Loa was set last May at 415 ppm.

The uptick is part of a decades long rise in atmospheric carbon-dioxide levels driven by the burning of coal and other fossil fuels, according to the chemical fingerprinting of atmospheric carbon atoms and various other scientific analyses conducted in recent years.  But how to explain the slowing emissions earlier in the century still resulted in such a high concentration last month?

Two reasons.  First, we see the indication that efforts to rein in carbon emissions the past 10 years are falling short. Emissions from the burning of coal, oil and natural gas for energy sent 36.3 billion metric tons of carbon dioxide into the atmosphere in 2021, according to the Inter-national Energy Agency. Even the first year of the pandemic, 2020, despite lockdowns and less vehicle use, saw little real improvement over the prior year.

Second, there is the delayed CO2 absorption and accumulation effect, which too few people appreciate. The greenhouse conditions we're in, then, essentially keep the 'boiler' going and an accumulation of heat near the planet's surface results.  Surface land heating then spreads it to the oceans as well, which take on the role of "radiators".   Indeed, the rate of ocean heating alone is now equivalent to seven Hiroshima A-bombs detonating every second, 24 hours a day, 365 days a year, e.g.

That heat is then distributed around the planet via ocean currents and weather systems. Think of how a home is heated by a radiator and you get the picture:  water is first heated by a boiler then the hot water circulates through pipes and the radiators warm up air in the rooms.  Even after the boiler is turned off the already heated water continues to circulate through the system, providing residual heat to the house.

This is by way of analogy to the fact that the average CO2 molecule (with its innate heat retention property)  can reside in our atmosphere  for at least 100 years. There is no on-off switch for climate change. Thus  the CO2 emission effects for a given year(e.g. 2021) are not just for that year but inclusive of the cumulative emissions for all the years preceding. One can think of it like a series with 100 terms, i.e.

In effect, it is the retention of CO2 and other greenhouse gases in the atmosphere that keeps the heating going.  So even a 10 year slowing of fossil fuel emissions will not cut the CO2 concentration in the atmosphere..  Even if the global air temperatures were to peak and stabilize the system-wide climate effects would continue in a pattern of degradation (e.g. sea level rise, ice sheet collapse, glacier melting, spread of tropical diseases etc.) , due to the already accumulated heat.

In other words we will still be stuck in a new greenhouse world, more radically different than the one we are in now. Noelle Selin, an atmospheric chemist at the Massachusetts Institute of Technology quoted in a WSJ report (May 6) makes it clear:.

But 'net zero' is a big ask.  It is essentially using the lowest emissions that were recorded, say during the early Covid lockdowns in 2020, and keeping them up for at least 15 years.  Somehow I doubt it happening, given so many millions are ready to crucify Biden now for high gas prices, instead of sucking them up, car pooling, taking out the bicycle, or whatever.  Americans also are traveling more whether by car or plane, they refuse to be grounded - so more fossil fuel consumption is the inevitable result.

Short of an extended and severe lockdown curtailing any travel at all -   say from an Avian flu pandemic-  I cannot see net zero being attained or the CO2 concentration lowered.