Forget The Policy Babble, It's Time For Dems To Play The Fear Card 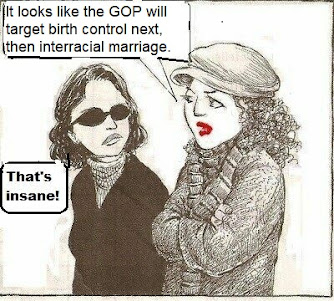 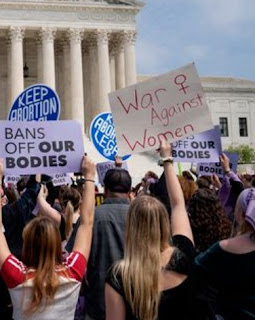 "This is the false piety hidden in the Republican Party’s zeal to roll back a woman’s right to choose. The sanctity of human life is all-important right up to the point when that flesh-and-bone child enters a world where programs designed to support women, the poor or households teetering toward economic ruin are being scaled back by a party that claims to be about family values." -  Michelle L. Norris, Washington Post, The GOP roars about abortion. Then they abandon the children

The leak Monday evening of a 98-page  draft opinion basically telegraphing the looming overturning of Roe v. Wade changes the complexion of the Mid Term elections. No longer is it merely about policy of one real party, but an existential battle to save this nation from authoritarian oblivion.  Because make no mistake, the Reep cult of Trump will not stop at abortion or voting rights - already maimed by the earlier SC Shelby decision- but every other presumed right.  Forget inflation, whether you go into debt or pay higher prices for gas or groceries means nothing, nada if you have no rights left to exercise, whether whom to marry, whether to use contraception or not, or even have a right to health care.  It's now time to get real, get serious and for the only political party left to play the fear card.  Not only warning too many sleepwalking Americans what an absence of rights looks like - but what a nation hemorrhaging refugees will look like.

Worst case scenario now?   The Reep cult takes over congress in the fall  - thanks to too many voters in a funk over inflation - and goes all out to  ban abortion nationally.    This would even be in states like Colorado which currently plan to act as a sanctuary state for women seeking abortions if the worse comes to the worst.  But even Colorado can't be a refugee state if the Repukes in  control of both houses pass a national bill outlawing abortion, or a "personhood amendment".  This is what people- especially vulnerable women - need to grasp and why it trumps inflation or any other issue.  Bottom line: Americans' rights now are on the ballot for the mid terms, and they better wake the hell up.

NYU law professor Melissa Murray and Harvard Law Prof. Lawrence Tribe didn't make sport last night on ALL In, laying out the threat to all our rights in the wake of the draft leak. Assuming it stands (99.9% likely) and is finalized in the Court ruling in June, watch for a major assault on other rights - from use of artificial contraception, to marriage equality.  In the last case the Right extremists will target not only gay marriage but interracial as well. Prof. Tribe saw a full scale assault mounted by the Republicans, and executed by their SC henchmen (and woman, Amy Coney Barrett) to repeal those rights arguing - like Alito did in the leaked draft, that:  The Constitution makes no reference to contraception, gay marriage or interracial marriage, and thus no such rights are implicitly protected by any constitutional provision."

This isn't "histrionic", it's being brutally honest. Prof. Tribe is no joker or 'hair on fire' crazy, he's been at Harvard teaching the law for decades, so don't tell me he's hysterical or doesn't know what he's talking about.   What had me taken aback is when he pointedly referred to Alito and his total "contempt for unenumerated rights under the ninth amendment."

Elizabeth Warren, also on the same ALL In, voiced support for "codifying" abortion protections by getting legislation passed to that effect. But as both professors noted, that would merely set the stage for the Right extremists on the Supreme Court to overturn that too.  In the meantime, the only faint hope left is for American voters on the sane side to get energized and stay energized until they cast their ballots against the Repuke authoritarians in the midterms. Put bluntly, the GOP cult cannot and must not be allowed to gain the reins of power, not now and likely not ever, and certainly not until they are cured of their Trump authoritarian fever.

Anyone who might have considered - before yesterday - voting for a Republican in the House or Senate - say to change the inflation tune, now has to get real. Get his or her head and priorities in order.  NO Republican is going to change or alter the inflation bogey, merely make millions of lives more miserable, say by cutting food stamps to save money and bankroll more tax cuts.  And then, if they grab a majority, the misery will be piled on when they take away the remaining rights that Profs. Tribe and Murray believe are in their sights.

This is what it's come to, folks, and why whatever the voting plan was for the midterms, it's now scotched. The only voting plan left is NO Republican mid term votes!  Miami Herald columnist Leonard Pitts in a recent column,

"What if the coup already came and nobody noticed? It sounds nonsensical, yes. How does a coup go unnoticed? The conventional wisdom, as we learn more about the election of 2020 and the insurrection of 2021, is that by the machinations of Ginni Thomas, Rudy Giuliani, Donald Trump and others, America came this close to suffering an extralegal seizure of power, but escaped. However, an argument can be made that another kind of coup — call it a stealth coup — has actually been underway for years. What is a stealth coup? That would be a coup that sneaks up on you, that isn’t obvious at first, because it slowly destroys not form but function. This one has overthrown not the government but, rather, one of its core tenets: the idea that that government is answerable to the will of the governed.

That’s something this one often is not. Consider the ongoing push by Republican lawmakers to restrict abortion, LGBTQ rights and the teaching of African-American history, while making it harder to access the ballot and easier to access guns. And then consider this: None of that represents the will of the American people."

Pitts nailed the situation to a tee. Especially on abortion, where a recent poll - cited again on last night's ALL In, noted 70 percent of Americans support a woman's right to abortion.  A right that now stands to be taken away and which may be one of the first among several.  A stealth coup by any other name. How will American voters respond?  One hopes they will do like the French majority did last Sunday and cut the authoritarians loose, once and for all.   As the historian Anne Applebaum wrote, and of which Americans need to take note, e.g.

There Is No Liberal World Order - The Atlantic

There is no pre-ordained "liberal order" which dictates historical progress over time. And the U.S. of A. is no exception to that. As she later wrote: "There is nothing inevitable about democracy or dictatorship. What happens tomorrow depends on what all of us do today.".

Trumpie stooge J.D. Vance's  OH win yesterday  is a shot over the bows of Democrats and freedom-loving Americans.  What will they- we - do in the face of the GOP authoritarian onslaught?  Sit home in the mid terms because it's all "too much" and besides we're buried with debts?  Or get out and fight for this country by overwhelming the energized Repuke-Trumpie -Authoritarian votes? Will the mass of voters, especially the lot dinging Biden and the Dems in the polls,  take heed or continue sleep walking (and slouching)  toward Gomorrah?

In his book,' Nervous States: Democracy And The Decline Of Reason', William Davies (p. 199) observes that "the attention economy" i.e. on which Twitter, Facebook, Instagram etc. are based is "fertile territory" to "turn rage and shock into engagement."   This is precisely what's needed for Dems - especially women,  victimized by the coming SC ruling-  to head off any "blood bath" in the mid terms.

And indeed, to prevail and leave that Trump cult in a house minority situation may well also require a "wartime mindset" (Davies, p.  216) which affords the advantage of "speed of response."  Basically we need our side to be worked up - as they are now from this Supreme Court arrogation of power - and to remain worked up through the fall. Our future as a constitutional Republic may depend on it, so sitting this one 0ut is not an option. Neither is voting Repuke.

Voters need to ask themselves why hundreds of thousands - even millions of people -  try to escape poor, violent countries every year to flee to the U.S.,  not to China, Russia, or Turkey.  Why do they seek out well-governed democracies as opposed to autocratic bastions?  Most critically, WHY would we in the U.S.  - the nation to which they flee- want to reduce this nation to another wretched, autocratic  hellhole? Why fall into the maw of the 'Make America Insane Again' crowd?

Come November Americans will have to ask these questions. They can decide they can either be part of  the problem  (the autocratic challenge to the few remaining democracies)  or part of the solution.

Supreme Court
The Supreme Court Has Gone Completely Rogue, and Promises Worse. Expanding It Is the Only Answer. The U.S. Supreme Court is poised to strike down a half century of precedent on abortion. We knew that was likely coming, but the leaked draft opinion by Justice Samuel Alito makes it starkly clear that the extremist court majority is laying down a foundation for an even more radical remaking of American society. The decision as Alito has written it takes aim as well at LGBTQ rights and marriage equality, legalized contraception, the right not to be forcibly sterilized, and interracial marriage. All lack “any claim to being deeply rooted in history,” Alito says. 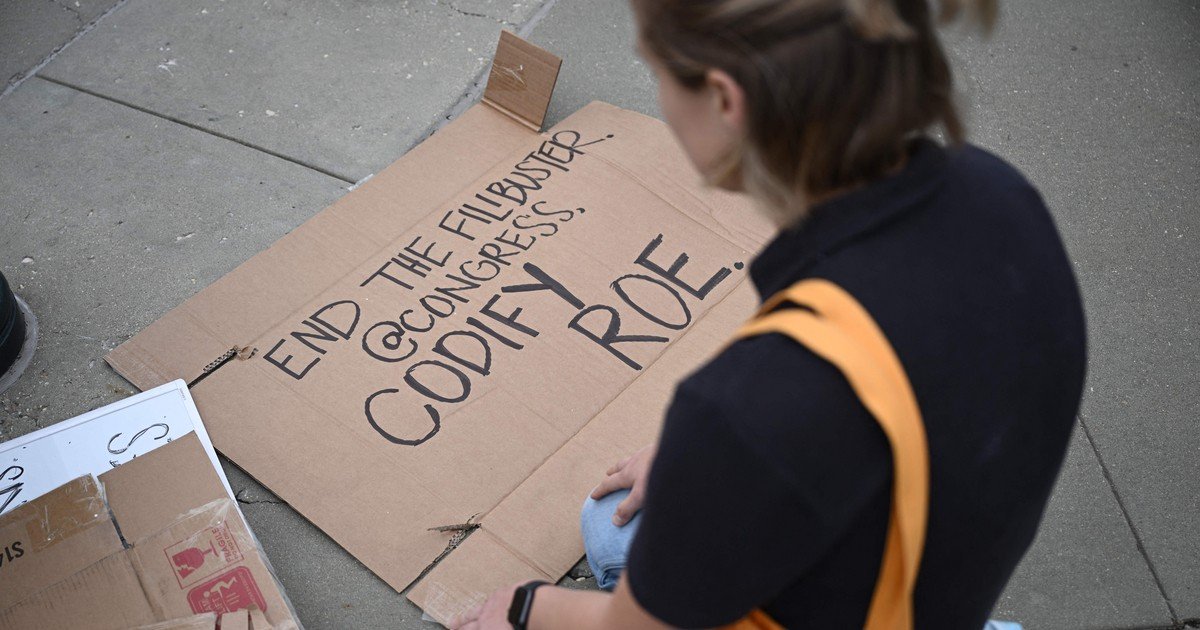 The draft Supreme Court decision, if adopted as final, will strip away the constitutional protection of a fundamental human right from all women in the United States. The immediate result will be the imposition of outright abortion bans in 14 states, with many other states likely to follow soon afterwards.

The draft decision does not grapple with the human cost of abortion bans and severe restrictions on access to abortion. Abortion bans would criminalize the seeking and provision of health care, threatening to put people in jail for seeking or providing abortions.

The GOP roars about abortion. Then they abandon the children.