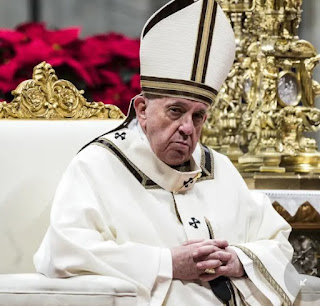 "You all had better make more babies, or else!"

On the topic of American couples who  choose not to have children, I've written before, including why they have the right to decline  and that it's  no one's business but their own, e.g.

And that includes the Pope, who last Wednesday actually insisted couples with no kids - or who choose to just have pets instead- are "selfish".  He further warned that the decision to forego parenthood could even "lead to a loss of humanity and be detrimental to civilization".  A loss of humanity? Detrimental to civilization?  How about hyperbolic humbug from the pope, causing us to ask what exactly he's been smoking?  If he wants to talk "detrimental to humanity"  how about people like the Turpins who spawned 13 kids -  based on an insane religious code - and then let them wallow in feces,  filth,  with limited food (fridge locked up) and often chained to beds.  See e.g.

And this is but one admittedly extreme example, but I could cite dozens where couples who had no business having kids delivered only negligence to their brood, abuse, and often caused them to become runaways.   Can we not agree  then that not all those who decline to have kids are selfish while many who do are selfish (like the Turpin wacko couple),  subjecting their offspring to hideous neglect and abuse out of ego, screwed up religious dictates, or plain desire to dominate.

At the same time let's educate the pope that exercising free will is not equal to being selfish. Can anyone with a working brain, including Pope Francis, process that?  According his scolding Wednesday as  CNN reported:

And this denial of fatherhood or motherhood diminishes us, it takes away our humanity. And in this way civilization becomes aged and without humanity, because it loses the richness of fatherhood and motherhood. And our homeland suffers, as it does not have children."

The  " reaction was swift and loud" on social media, according to one WaPo account on Friday.   This should not have been surprising given all Francis offered was a form of religious bunkum in the guise of hyperbolic twaddle .  For one thing it takes no account that not all humans have the temperament or desire to have kids.

Dismissing that aspect is often what leads to so much abuse and neglect - leaving charitable or social service outlets to pick up the pieces.  This is precisely why it's good for a couple to KNOW in advance they are not "child inclined".   Thus,  Janice and I knew from the get go we lacked the interest, patience and energy to have children, raise them to maturity and all the rest. From the time of our marriage in 1975  we realized we were not cut out to care for kids, or to be there for them.  Further, we had zero inclination to alter the situation though one relatively brief experience with an "adopted" kid confirmed our beliefs.

This involved  our agreement in 1987-88 to take in an American Field Service (AFS) student of 18 yrs.  At that time, while still living in Barbados,  we were informed "Julie"  was a "sweet kid" but had "a few problems" in two other homes where she'd stayed. Still, she wanted to continue her AFS year,  but wanted to live in a home with an American "parent".   So we agreed somewhat reluctantly to take the risk.   She was nearly a full grown kid so what could go wrong? Well, just about everything as it turned out!

Alas, we quickly (within a week) realized the decision  was an unmitigated disaster. On numerous occasions the girl exhausted our patience and good will with her spoiled brat, entitled American behavior, e.g. snubbing the home-cooked meals we provided in favor of "American -style burgers and fries" at the Hilton down the road. By the end of her stay in May 1988, we were elated to see the back of her, so was our 19 year old niece Trudi - also living with us at the time.  When people ask why we never had kids we often point to this experience . When they usually add it "would have been different with a kid of your own raised from scratch" we both laugh and say, yeah right - if anyone else would have done the rearing!

Apart from the matter of personal choice re: procreation, let's admit there are already too damned many people on this finite planet, e.g.

We all have to make choices. some good, some bad.  In our case we ultimately decided that a choice to have kids was not only inimical to the kid's welfare but the to the planet's.

In general, all humans use past experience and current insights (as well as self-knowledge),  to try to make the optimal choices for the people we have in our lives, care about.  These usually involve trade-offs. Most of us have made such choices and sometimes found they might be difficult.  Our "trade offs" entailed being able to travel at will, e.g. to the U.S. and Europe - and also enjoy our respective hobbies - which used money we'd otherwise have had to sock away for a kid's (or kids') education.   Those trade offs we never regretted then, and don't now.

Why any of this should be so hard for even a pope to grasp is beyond me. Especially as erroneous Catholic dogmas (like against condemning  artificial contraception) do not apply to atheists, agnostics or most Protestants. Even good Catholics ought to question this dreck given those "moral injunctions" are issued out of the magisterium (or teaching office) and not 'ex cathedra' - or from the "chair of St. Peter".  Hence, technically, are not "infallible" edicts.
It surely  ought to be a no brainer that any potential children coming into this world deserve the best lives they can possibly have, devoid of destitution (too little $ and too many mouths to feed), negligence or impatience that might draw harsh punishments.  Thus, the choice not to procreate can be as morally viable as one to do so - assuming it is made in good faith.
We both made our decision not to procreate in good faith and it is not up to a pontiff, doctor, minister - or any other scold - to tell us otherwise. Especially a guy who already chose being childless!
See Also:

Childless Man Says Not Having Kids Is 'Selfish' - The Cut

And:
Brane Space: Why Having Kids Is Not An Unambiguous Investment In Happiness - Yet More Reasons To Ignore Economists' Pleas To Make Babies (brane-space.blogspot.com)
Posted by Copernicus at 7:38 AM