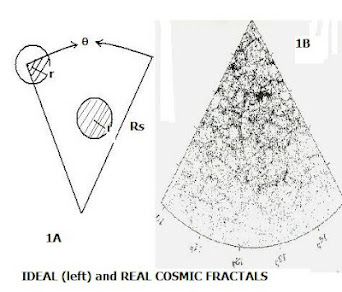 Having dealt at some length in previous posts  with basic  fractal features, then cosmic fractals and how to obtain their dimension and density, we now look again at the latter in more detail. What I will do is examine an ideal example of a type of simple topological fractal which, with suitable adaptation and modification (mostly by including many self-similar, complex parts) and which could double as a basic "cosmic fractal". I will then show an actual cosmic fractal (or perhaps more accurately what might be considered as such ) and how it compares to the ideal case. These fractal applications are important because they serve to enable us to perceive the cosmos in a new and more practical light, with centers of self-similarity and non-linear complexity that may explain some large scale cosmic attributes, up to an including (maybe) cosmic accelerated expansion.

The most basic way for the cosmos to exhibit a fractal nature is in terms of its dimension. Thus, the universe may well not be four dimensional, or five dimensional, but fractal dimensional with the dimension non-integer, say between 4 and 5. (E.g. 4.2). This sounds counter-intuitive but people need to bear in mind that one of the original founders of the calculus (Leibniz) left open the possibility for a fractal operator in his derivative of a function, F(x), such that:
Given: (d/dx) n  F(x)
The value of n need not be an integer.
In the case of the cosmos at large, one will wish to examine concentric spheres of radii: R1, R2, R3....R N and assess using these radii the density of objects within - assuming a hierarchical configuration. In the most abstract sense then, the cosmos' fractal dimension will depend on regularity between successive expansions factors k, k', such that the dimension will be:
D = (log k')/ (log k)
And one uses radii: r n  = k n  r 0
Where cosmic radius  r 0  contains  N 0 objects, and  r  1 contains  N  1  objects, and so forth.
To fix ideas, let the zeroth radius  r 0  = 1 pc (1 parsec, 3.26 light years). Let it possess  N 0 = 1 (1 object, say a star). Then we go to  r  1  = 10 pc and  N  1  = 100. Then,  r  2 = 1000 pc, and  N  2 = 10,000.
If one truncates the data right here, then we can establish the expansion factor using the last two r-values:
r  2   =   k n  r 0   = (1000 )  r 0   = 10 3  (r 0 )
r 1   =   k n  r 0   = (10)  r 0  =   10 1 ( r 0 )
From this we determine: D = log k 3 / log k1  = 3
Note, however, that if   r 2 = 1500 pc (same objects interior) then D = 3.17 and we have a true fractal dimension. In practice, the means to determine an overall cosmic density are nowhere this simple. The main problem is the ability to correctly assess the relevant objects (in this case galaxies, or galaxy clusters) interior to the respective radii.
In the figure, the basic template fractal is shown in 1A. Actually, it is a composite with two deterministic and two stochastic contributions. The deterministic fractals are the shaded and unshaded segments of the circle with radius r in the upper left of the sector. The stochastic parts refer to the fully shaded circle within the sector and and the (open space) set intersection between it and the other shaded deterministic part. The radius R s may be thought of as an applicable scale for the whole, which also subtends an angle q  in arc measure.
In Fig. 1B, the reader will see a sector subtending about five hours (~ 75 deg) of Right Ascension. This is a cosmic snapshot of galaxy distribution obtained using the Two Degree (2dF) sky survey. One comparative aspect immediately visible is the difference in void distribution between the ideal and actual cosmic case. To fix ideas, the void in the ideal fractal sector is more or less uniformly distributed, at least around the circular stochastic element. In the real 2dF sector, the void is distributed toward the periphery of the field. There is much greater fractal density and complexity toward the center of the sector.
Early on, fractal researchers and investigators like Benoit Mandelbrot realized that fractal dimension, D, was not adequate to to accurately assess or determine the topology. A new measure was needed that reckoned in void extent, and that was defined by Mandelbrot as the lacunarity. One may define the lacunarity, L, defined:
L = Nr(k>   R s)/R s -D
I have taken the liberty of using  R s  in the abstract case (1A) to double as the scale size for the radius of the actual cosmic sector in 1B. There is no loss of generality here, though Mandelbrot used the capital Greek letter LAMBDA to denote it
We take the exponent D= D' = 2.5. In terms of 'N', the actual cosmic sector holds about 100,000 galaxies so N =  10 5. By comparison, the "objects" in Fig. 1A correcting for the spaces and density of deterministic and stochastic fractals are N ~  10 2 .
Now, the denominators for both are respectively, R s - D  = (1)  2.5  = 1
Thus, the lacunarity is solely dependent on N, and for the real cosmic case, the ratio of it lacunarity to that of the abstract or ideal example is:
L  c / L = (10 5 )/   10 2 =  10 3
Thus, the number of voids is about 1000 times higher. This should not be astounding if one closely inspects 1B. Going through the sector we behold innumerable tiny white spaces , many more than in 1A. Again, for lacunarity, size of the voids is not the issue so much as the frequency of voids overall within the fractal structure. Above all, what we want to see is self-similarity revealed in cosmic structures and perhaps even in the cosmos as a whole.
What does all this have to do with parsing actual cosmic structure? Only that fractal analysis may be of some use in ferreting out the dynamics of cosmic expansion, say, and in particular why interspatial topology alters at a much more rapid rate than appears to be dictated by red shift measurements. Thus, although redshift (Hubble law) calculations show a universe 13.7 billion light years across, the actual radius is more like 46 billion light years- because of the accelerating interspace dimension
See Also:

Is The Universe Actually A Fractal? - Forbes