Was Latest Monster Colorado Firestorm Started By "Evil" 12 Tribes Religious Cult? Probably - And They're Pegged As "Evil" By Ex-Members 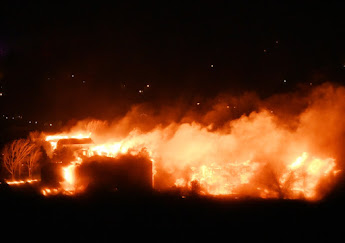 Marshall wildfire at its peak - $1 billion worth of damage

Colorado's most destructive wildfire in years - the December 30th Marshall fire- has wrought an estimated $1 billon in damages and rendered hundreds from small communities nearby homeless. In the destruction that day, wind gusts as high as 105 mph grounded the state’s firefighting air tankers. Flames burning dried grass began kicking up embers, the way forest fires do, igniting homes, and buildings themselves became tinder accelerating the fire.  The combination created a firestorm that destroyed 1,084 structures and damaged 149 more across 6,026 acres before snow finally fell and snuffed flames.

Natural forces unleashed by an out-of-kilter climate essentially overwhelmed firefighters, preventing them from attacking flames. All they could do was – heroically – hasten the evacuation of residents to save lives.  But make no mistake, the proximate cause, as even experts agree, was human foolishness.
At the top of the list "too many homes being built in the line of fire", this according to University of Colorado Earthlab specialist Jennifer K. Balch.  She went on to point out that "thousands of new houses were installed over 25 years between Denver and Boulder" - and in the proximity of tinder dry grasslands. As she noted, in response to a question by a Denver Post reporter:

"We need to re-think how we’re building in flammable places. And, we’ve been building homes that are flammable.”

Reinforcing Balch's assertion, insurance industry researchers this past week  found that too many houses had been built too close together on the tinder-dry high plains between Denver and Boulder.  This led to the record Marshall firestorm losses topping $1 billion, as they sifted through ashes and charred ruins

Why does this need to addressed?  For years here in Colorado, climate warming has been leading to progressively drier, more flammable conditions and more winter grassfires — because hotter air leaches more water from land and rivers into a thirstier atmosphere. Temperatures in parts of western Colorado have been rising nearly twice as fast as the global average increase. Further, we know climate warming will intensify for at least two more decades and as I've already predicted, right up to the onset of the runaway Greenhouse effect early in the next century. This is even if world leaders succeed in drastically reducing consumption of fossil fuels today, given there is already a 100-year backlog of CO2 in the atmosphere from prior years. (CO2 molecules last an average of 100 years in the atmosphere once deposited.)

This winter, Colorado officials had measured soil moisture along the Front Range and found it at record low levels following a record hot summer and fall.  They further recognized implications of the exceptional absence of snow: dead grass that normally would be buried or matted stood upright, able to function as a superconductor for flames. All it would take is ignition, which happens regularly now with Colorado’s population approaching 6 million.

The top suspect for that ignition is now a wooden shed fire that erupted on the same day on the property of a religious cult called "the Twelve Tribes".  (They vigorously deny being a cult but they have all the attributes of one, e.g. from a 2010 issue of Free Inquiry Magazine:

1-A belief system that is independent of facts, logic, or even one’s own intuition. In other words an absolute and blind acceptance of literature (provided by cult leaders) as undeniable fact.2-A pre-meditated choice to isolate from the rest of society, usually justified by the assertion that those outside of the faith are wicked, lost, etc.3-The complete loss of individuality, logic, and objectivity. The only reasons for continued existence becomes the serving of the cult’s raison d’etre.

They certainly meet attributes (1) and (2) given, as The Colorado Springs Gazette has observed, they:

"seek to obey God’s will as revealed in the Old and New testaments. They take Hebrew names, live communally, home-school their children and try to keep to themselves"

What is more, we can also add (3) given members are required to live under strict rules, e.g. "spare the rod, spoil the child" and adults - though they may work at assorted Tribe outlets  (many work at their Yellow Deli café in Boulder) but are not allowed actual income since they are deemed "volunteers."   Sounds a helluva lot like the People's Temple group to me.

According to The Gazette piece, "a man who answered one of the Colorado Springs member’s phones said the group had no comment but was working with the Boulder County Sheriff’s Office. The group’s website was disabled last Tuesday morning."

Federal officials are currently  helping in the investigation, which could take months. Early claims that the fire was caused by downed power lines were not confirmed and the utility company has since denied it. Besides, we already have video of that burning wood shed on the 12 Tribes' property, e.g.

Could this burning shed be the source of the Marshall Fire? - YouTube

And we know the cult was obsessed with fire - using it for many of their rituals. As the Gazette put it, "the group desires privacy, but privacy may be hard to find now that Colorado officials are investigating claims that a  Dec. 30 fire in a wood shed on the group’s rural property near Boulder."

As I wrote, human stupidity,  especially in our mega -drought conditions, where no one should be outside burning anything. Seldom has the trend toward more winter grassfires inside cities been more evident than during the seven weeks before this disaster: For example, a  Nov. 14 outbreak in western Colorado Springs forced evacuation of 22 homes. Four more grassfires broke out on Dec. 12 in Colorado Springs along Interstate 25. A grassfire Dec. 23 in Boulder burned six acres along a creek path. A 150-acre grassfire Dec. 27 near C-470 in southwest metro Denver forced thousands of residents to flee. Severe wind, common as winter storms roll across the Rocky Mountains to the plains, caused havoc Dec. 15, toppling trucks and trees. And wind exacerbated a 145-acre forest fire Nov. 16 west of Boulder near Estes Park.

According to state climatologist Russ Schumacher in a Denver Post interview:

“Our awareness was up. But I don’t think any of us imagined what we saw was going to happen – such a fast-moving fire burning through neighborhoods. You look back and with hindsight you see all the ingredients were there. But it’s still hard to get your mind around the idea that this is going to happen.”

Well, now we KNOW it can happen and we need to be proactive to ensure another such disaster doesn't happen again. We need to begin by putting curbs on development in these fire-prone, tinderbox areas.  Because that is simply asking for a major disaster to happen.  Curbs in development  - especially homes built too close to one another - also means curbs on the influx of new arrivals coming into the state.  This is especially given we are also facing an ongoing water crisis, e.g.

Brane Space: "Growth-ism" And The Water Crisis In Colorado: Can Further Population Increase Be Halted? (brane-space.blogspot.com)

The use of  brute force to keep people out isn't needed but surely numbers can be controlled via much higher taxation  (via property taxes, utility fees) for any added developments, real estate projects - especially near fire -prone areas.  This is a sensible way to correct the problem, in addition to imposing much higher penalties for any outside burning.

Brane Space: YES! Colorado Is Full - Not For Lack Of Space - But Lack Of Supporting Resources (Namely Adequate WATER!) (brane-space.blogspot.com)