Nuclear physics embraces that area of physics devoted to the study of various atomic nuclei, their interactions, dynamics and especially their use in specific nuclear models which help to describe how nuclear energy (whether by fission or fusion) is produced. It is especially important to grasp the basics if we are to go on to discuss the possible use of nuclear energy as an accompaniment to alternative sources (e.g. solar. wind, geothermal etc.) and thereby reduce significantly the use of fossil fuels.

Nuclear models occur under a set of hypotheses, each of which explains some aspect of nuclear behavior. The most basic is perhaps the “liquid drop model” which is used to account for nuclear fission, radioactivity. This is illustrated in Fig, 1 below: 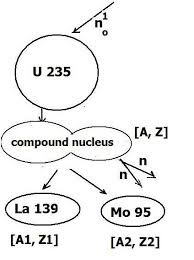 Fig. 1: The Liquid Drop model showing U235 Fission
As the name implies, the nucleus is depicted in terms of a “liquid drop”, which analogous to a liquid macroscopic drop, exhibits surface tension and an excitation energy when disturbed.
This model is premised on the exceedingly short range of nuclear forces which requires that nearest neighbor attractions predominate. This is somewhat similar to the type of attraction between the molecules of a liquid which leads to the property of its surface tension.  Thus, in a liquid drop nucleus each nucleon shares its total binding energy with every nucleon.As the simplified model diagram (for U 235 fission) shows, we expect  a spherical configuration in the minimum energy or unexcited state.  The unstable (compound) nucleus then yields two “daughter nuclei” : La 139 and Mo 95, with two additional neutrons released.
The total binding energy initially holding all the nucleons together in the liquid drop nucleus model is comprised of a sum of separate energies, including:  surface or E(s), volume or E(v), and Coulombic repulsion or E(c) – the latter due to the electrostatic repulsion between protons. Thus, the binding energy:

A reduction in any one or all of these constituent energies reduces the overall binding energy and hence the bonding energy between any pair of nucleons. To account for energy release in the fission of heavy nuclei we need only represent the nucleus as a liquid drop and its transition from the unexcited to the excited state as shown in Fig. 1.
Thus, between the spherical and compound nucleus phase, the “drop” may be said to undergo oscillations which lead it to overshoot sphericity in two directions – vertically (converting to an elliptical configuration with semi-major axis in the vertical sense, and horizontally, with semi-major axis in the horizontal sense. It finally reaches a point – the compound nucleus phase – at which the surface tension restoring force is no longer able to contain the long –range Coulombic repulsion force and the inertia of nuclear matter.

At this point, the drop reaches a stage of distortion in which the nucleus splits into two fission fragments, denoted by [A1, Z1] and [A2, Z2]. In order to further assess the nuclear changes, we use what is called a “semi-empirical mass formula” which sets out the key terms and their contributions as follows: