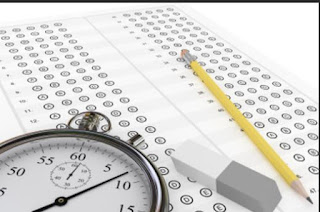 It's regrettable that the SAT is now on the way out, effectively, with over 1, 815 colleges no longer requiring it. Also, College admission tests like the SAT and rival ACT carry less weight today as colleges and universities pay more attention to the sum of student achievements and activities throughout high school.

Amid criticism that the exams favor wealthy, white applicants and disadvantage minority and low-income students, an increasing number of schools have in recent years adopted test-optional policies, which let students decide whether to include scores with their applications. The pandemic accelerated the trend as testing sessions were canceled or inaccessible.

But hey, at least it's now been made relatively easier - and shorter- in a digital format. We are informed that, unlike those of us who took the SAT in the "olden" days, the new test takers will experience only two hours of torture instead of three (for the standard verbal and quantitative) and the verbal portions will have shorter reading sections. In addition, test takers can now use calculators on the math portion when we weren't even allowed slide rules - in 1963.

On the other hand, one aspect hasn't changed: The SAT is still regarded by Mensa as an achievement test, not an aptitude test, and hence cannot be used as qualification to enter the high IQ organization.  Dr. Abby F. Salny addressed the reasons in the March, 1994 issue of the Mensa Bulletin, writing:

Mensa's Constitution says 'IQ test or equivalent'. This means we can accept a test that measures learning aptitude, but not a test that measures exclusively what has been taught in school. The whole purpose of Mensa was not to reward high scholastic achievement but to recognize intellectual giftedness. The two are not synonymous.--- In short, any test that we have rejected, or that we will reject in the future, has changed content from IQ or equivalent to content mastery. Our Constitution mandates this and we are trying to follow our Constitution.

More recently, in fact from January 1st this year, Mensa directors have made it clear that "the most detailed information Mensa will share with prospective members is whether the scores qualify them for Mensa membership or not."  In other words, test takers will not be told their specific I.Q. scores.  However, they can request "raw scores" - but these will not include percentile ranks or actual I.Q. scores. The reasons for these changes have "been necessitated by revisions to American Psychological Association (APA) guidelines and Texas state laws" (Texas is where Mensa has its headquarters).

For those who remain curious as to how their prior SAT or GRE scores translate into I.Q. check out the link below for estimations: http://www.iqcomparisonsite.com/greiq.aspx

But please do note this "comparison" information (aptitude test score vs. I.Q.)  was assembled independent of Mensa and the website is not affiliated with American Mensa, so we are clear.

Regarding  prior SAT, GRE etc. test scores,  recall that only a subset have been accepted as proper aptitude tests for Mensa admission.  If you have SATs from 1974 through 1/31/94 you can qualify if your Verbal-Math total is 1250 .  If before 1974, it needs to be 1300.  If you're using the GRE (Graduate Record exam)  prior to May, 1994, the total needs to be 1250. If after that date but before 10/2001 then the verbal, quantitative and analytic total must come to 1875. After 10/2001 it's no go,  because those tests are now deemed content mastery only, not aptitude. (See link given below).  Those wishing to join Mensa still have the option of  either offering an earlier SAT test, or taking the Mensa test.