The shell model of the nucleus treats a different aspect, namely specific energy levels within the nucleus.  To achieve this the nucleons are treated as independent particles, each of which moves in its own spherically symmetrical potential well about 50 MeV deep with rounded edges, e.g. 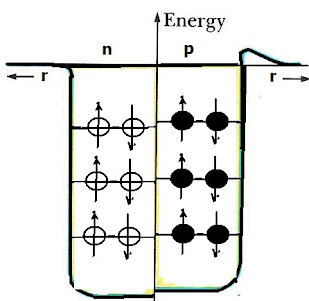 The potential well for the Shell nuclear model

The Schrodinger Equation is then set up for this potential, e.g.

The solution yields stationary quantum states, somewhat like the states which are associated with electrons in the outer shells of the atom.

Like the electrons occupying atomic shells, the nucleons are fermions, i.e. particles each with spin ½  and therefore obeying the Pauli Exclusion Principle so that no more than two nucleons of the same type can occupy the same energy level (e.g. one with spin +½, the other with spin -½.). This leads to particles pairing up in the nucleus: spin up (+ ½) protons with spin down (-½) protons, and spin up neutrons with spin down neutrons.

The form or expression for the energy of a nucleus is very closely approximated by the energy associated with a “square well” potential.  The Fermi energy in more explicit form (which we will not elaborate upon too much beyond this) is:

Where M is the nucleon mass, and  ħ = h/2p is the adjusted Planck constant (h divided by 2p) and r is the nucleon density. Performing the operation with known or estimated values, the result is EF =  30 MeV.

If we assume a spherical nucleus then the radius is just:

This is also the dimension on either side of the central symmetry line of Fig. 6. The evidence for the shell model includes the following:

i)Particularly stable nuclei are borne out by “closed shells”, based on our observations.

ii) The model predicts (correctly) that the even N (or A – Z) nuclei will be most stable and the odd Z, odd N nuclei the least stable. Experiments bear this out: there are 160 stable nuclides (with even Z, N) and only 4 with odd Z, N.

iii) The model predicts that for even N, Z nuclides the total angular  momentum J = 0, and that for odd nuclides it is half-integral. (Borne out by measurements of nuclear magnetic moments.)

Example Problem: Find the diameter of the oxygen (O 16) nucleus.

The preceding result can also be generalized to a situation in which the ratio of radii (between two nuclei) is sought. In this case, we can write:

Example (2): How much larger is a copper nucleus than an oxygen nucleus?

Let R1 denote  the radius of the copper nucleus, and R2, oxygen’s.

Thus, the copper nucleus is about 1.587 times the size of the oxygen nucleus.

1(a)Find the ratio of the helium nucleus to the uranium 238 nucleus.

(b) Estimate, using any technique you can think of, the ratio of the nuclear densities for part (a).

a) Find the diameter of the nucleus and how many times it is greater than that of hydrogen.

b) Find the mass defect D M for this nucleus.