The most basic and intuitive method for measuring a star's distance employs elementary trigonometry. It is called the  "parallax  method"   because it uses the phenomenon of "parallax". One can get a simple idea of this by holding an index finger at arm's length- then looking at it  with  only  the  right eye open,  then only the left. What you'll see as you do this alternatively  is the visible shift of your index finger against the given  background. Say from one part of your book shelf to another. (A very tiny shift.)

The angle that is subtended between the different background points, with respect to your nose ("vertex" of the resulting triangle), say,  is the "parallax angle".  The diagram below shows how it is measured: 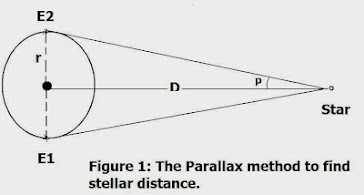 Here, the points E1 and E2 represent Earth at two opposite points of its orbit around the Sun. The star indicated is the one for which the distance(d) is sought. Using photographs of the star taken at the points E1 and E2, we can measure what is called the angle of parallax p. The solution for the distance can be obtained from:

that is, equal to the radius (R) of the Earth's orbit, e.g 1 A.U. or astronomical unit = 93 million miles = 1.5 x 1011  meters) divided  by the tangent of  the angle  p. (which will be a very small angle).  The tangent is a function which denotes a ratio of lengths for a right triangle. In this case, the tangent of the angle p is defined:

i.e., the side  opposite the angle (R), divided by the side (d = distance to star)  adjacent to the angle (d). Using algebra, one then makes d the subject, which means solving for it.

The exact term logically chosen for this particular distance is the parallax-second or parsec and doing the math (tedious, but possible) shows the distance turns out to be:

Now, given this relationship , it follows that any proportionate decrease in the angle p allows one to work out the resulting distance! Thus, if p = 0.5" then d = 2 parsecs or 6.52 Ly, if p = 0.25" then d = 4 parsecs or about 13 Ly and so on. Thus it was found that even the nearest stars were light years distant - using the simplest conceptual method available. The first successful parallax measurements - so far as we know - took place around 1838, when Friedrich Bessel (Germany), and Friedrich Struve (Russia) detected the parallaxes of the stars 61 Cygni, Alpha Centauri and Vega, respectively.

Another application of basic trigonometry in involves obtaining the relative distance to an inferior or superior planet in relation to the Earth. As we've seen before, it's easy to apply Kepler's 3rd law to obtain the basic dimensions of an orbit, namely the semi-major axis of the orbit - or the mean distance from the Sun. But things become somewhat more difficult when we seek to find the distance say, of the Earth to the planet, or the planet at a specific time - say before it commences retrograde motion.

So we consider two cases in the diagram below: 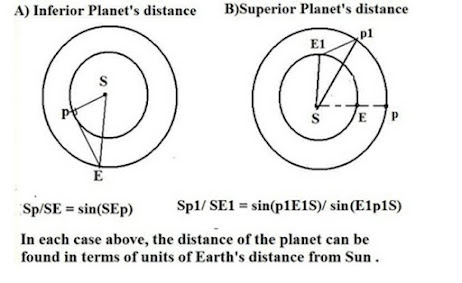 The quantity Sp/SE is the distance of the planet from the Sun in terms of Earth units or AU, (i. e.  astronomical units). Let Sp = R and SE = a(E) the semi-major axis for Earth's orbit, then:


In this case, we apply diagram (B), showing the planet at two successive positions, p and p1 and the Earth at E and E1. This is a more difficult case but can be worked if the planet's synodic period S is known.

Here, we let the planet p be in opposition at some given time with the Earth and Sun (e.g. showing the alignment S-E-p in diagram (B). As we know, with opposition, the elongation is a straight angle or 180 degrees. Then after t days have elapsed the Earth's radius vector SE has moved ahead of the planet’s as shown in comparing SE1 to Sp1. As can be seen, this reduces the angle of elongation from 180 degrees at opposition to angle SE1p1. This is then measured.

Now, over t days, the angle ESp will have increased from 0 (at opposition) to a value Θ given by:

where n, n p are the mean daily motions of the Earth and the planet, respectively. Using relations for the periods seen in the previous chapter, we may write:

So, since t and S are both known, Θ can be obtained - that is, angle E1Sp1 is calculated. Hence, angle E1p1S can be found from:

From plane trigonometry we then obtain:

again, giving the distance from the Sun in terms of Earth's distance unit.

2) A recent observation of Mars 36.5 days after opposition showed an angle of elongation = 136 degrees. Find the distance of Mars from the Earth if Mars' orbital period = 687 days.

Posted by Copernicus at 6:41 AM