Even With Largest Cost Of Living Allowance In Decades, Neither Social Security Or Medicare Are "Entitlements" 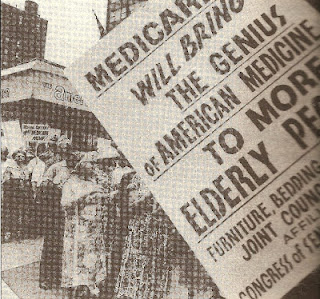 Drumbeats in the corporo-media (e.g. WSJ, today, p. A17, 'Entitlements Always Grow and Grow'), if they are sustained long enough, can easily brainwash too many into believing them.  One such example is that Medicare (and Social Security) are "entitlements."  Of course this is abject nonsense, and this is despite the fact the Social Security cost of living allowance (COLA) for this year is the largest (5.9%)  since 1982.   This reflects the higher inflation this year and also higher medical costs.

But for beneficiaries this "raise" will be diminished by an even larger cost increase in Medicare Part B - which covers physician visits and other outpatient care.   That cost will soar by 14.55% and that increase is deducted from one's monthly Social Security.

These figures just barely touch on the challenges facing more than 55.5 million Americans, which will include higher out of pocket costs (especially for dental work, eye exams,  glasses) as well as higher copayments, higher deductibles and higher drug costs (for the Medicare Part D drug plans).   To fix ideas, according to the Kaiser Family Foundation the most recent available data showed out of pocket spending of $6,150 a year for citizens on Medicare.-  with more than one-third spending 20% of their per capita income on health care costs.

Interestingly, that is almost what we laid out last year  - for dental cleanings, fillings, crowns, x-rays, eye exams and new glasses.  Planning for a 30-year retirement?  Do the math, and factor in at least 10 % inflation per year. That is how much extra money you are going to need to sock away to cover that out of pocket spending.  Think you might be able to ignore some of the costs?  Think again! Such high medical costs are not just a financial issue but can lead to denial of access for treatment, poor health and even premature death.

That was the lot of too many seniors before Medicare became law in 1966, and only after a savage battle with the AMA - which saw it as "socialized medicine" and an inroad for communism into the country.  One of the chief propaganda spokespersons was Ronnie Reagan pumping his effluent in spot ads on TV in the early 60s.  The AMA also organized women into "coffee klatches" -  complete with talking point tool kits - in an effort called 'Operation Coffee Cup'-   to address the "grave threat of socialized medicine".

What did seniors have before Medicare? A law called Kerr-Mills, which focused on  dispensing state aid (not federal) to  2.4 million elderly on state welfare rolls. The amount of medical aid determined by each state, usually in the form of a yearly stipend. This was out of 14 million Social Security beneficiaries.  It was estimated at the time that 10 million of these seniors could have used some kind of further health assistance.  But if they needed it they would have had to depend on charity or the good nature of neighbors and family to help.  It was Medicare which finally broke the chains of this charity dependence.

But today we find Medicare becoming insolvent, largely thanks to the parasitical presence of "Medicare Advantage".  Most people are unaware that this program is not government -supported but rather implemented through expensive private plans.  As described by blogger David Lindorff, e.g.

Under Medicare Advantage, the Medicare recipient opts to buy a private (for-profit or not-for-profit) insurance package, sometimes for a little more money, and sometimes for no money beyond the amount already being paid to the government for Medicare Part B. That private plan will then cover the costs of hospital and out-patient care as well as drugs. But not for all the costs. Many plans exclude certain procedures and since virtually all MA plans are “managed care” insurance, subscribers need to get approved by a gatekeeper primary care physician who is in the plan’s network before they can go to a specialist. And even then, the specialist they go to, as well as the primary care gatekeeper physician, has to be someone who is in the plan that you have enrolled in. For many people who live in more rural or even in medically underserved urban areas even in the cities and suburbs, this can cause big problems. There may not even be a needed specialist, or the one or ones who are in the plan may be fully booked for months.

With traditional government Medicare, a patient can go to virtually any doctor and any specialist physician and Medicare pays the cost, minus a co-pay.

When it comes to Medicare Part D, the prescription drug plan, things are not much better for current recipients given the cost of many meds is sky high.  My youngest brother Mike's lot of 15 meds, for example, came to over $2,200 a month. Fortunately, as a vet, he benefited from the VA bargaining for the lowest prices - else he'd have gone into the proverbial poorhouse.  Not all Medicare seniors are that lucky so often have to split their pills into fractions to make them last so they can afford the next set. Or trade their nutrition for meds, a harsh choice.

One simple solution would be to allow Medicare to bargain for the lowest drug prices like the VA does.   Indeed,  Biden's 'Build Back Better' bill - which Manchin and Sinema are now blocking (under the guise of further negotiating) would allow Medicare to negotiate prices with drug companies for some high cost drugs under Part D, starting in 2025.  It would also cap out of pocket Part D costs at $2,000 a year.  Both these aspects are desperately needed now by millions of seniors who, failing the bill's passage - will again have to depend on charity (going to food banks) or the good graces of family.

When you hear anything about the "big haul" U.S. seniors are getting with the increased cost of living allowance this month, be sure to howl with derisive laughter.  Then ask the particular dunderhead if s/he even knows the difference between Medicare and Medicare Advantage!

– from The Hartmann Report In 2003, George W Bush set up the destruction and privatization of Medicare. The end of “real Medicare” is getting closer every day, and Congress and Medicare’s administrators are doing nothing.

Last Friday the Centers for Medicare Services (CMS) announced a 14.5% increase in Medicare Part B premiums, raising the monthly payments by the lowest-income Medicare recipients from $148.50 a month to $170.10 a month next year.

If you’re trying to live on the bottom rung of Social Security (about $365/month), that’s consequential. People with Medigap policies are also seeing their policy price rises announced this month.

Two months ago I wrote about the Medicare Advantage Scam and how it can screw consumers. This price hike, though, raises the larger issue of what’s happening to Medicare itself and whether the entire system may be out of business in a few years, in part because our government is being robbed blind by all these so-called “Advantage” plans.

It all began with George W. Bush, who’d spent most of his life openly and proudly campaigning to privatize Medicare and Social Security.

In 2003 Congress and the Bush administration rolled out a privatization option, allowing private for-profit insurance companies to sell policies branded as “Medicare Advantage” to gullible seniors who think they’re buying the actual Medicare Parts A and B. As a result, today companies eager to rip off seniors are flooding the market, particularly with TV advertising.

As I note in considerable detail in The Hidden History of American Healthcare: Why Sickness Bankrupts You and Makes Others Insanely Rich, Medicare Advantage is hurting traditional Medicare, because that system is paying the insurance companies, in most cases, far more than it would be paying to simply cover the costs of its regular Medicare recipients.