The Correct Conclusion: Martian Meteorite ALH84001 Can Be Explained Without Invoking Presence Of Martian Life 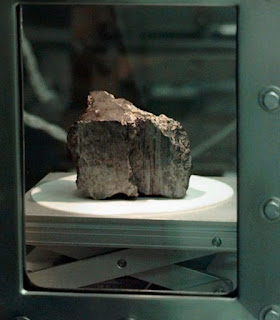 Martian meteorite ALH84001, now found to have no life

Imagine fragments of the planet Mars landing on Earth without our even having to travel to the red planet to retrieve them. Fantastic? Science fiction? Not at all, but astronomical reality.  A "Martian meteorite"  is basically  a rock that formed on Mars, was ejected from the planet by an impact event, and traversed interplanetary space before landing on Earth as a meteorite. Hundreds of such meteorites have thus far been classified as Martian in origin, but that is less than half a percent of the 72,000 -odd meteorites that have been classified.  In other words, it is still a relatively rare species of event.

A Martian origin was finally proved when it was found that several of them contained trapped gases with a composition identical to that of the Martian atmosphere as measured by the Viking landers. The rocks are thought to have been ejected from the Martian surface by large impacts. They then went into solar orbit for several million years before falling on Earth.

Of particular interest recently has been a 4-billion year old  Martian -originating meteorite designated ALH84001 .   In 1996, a NASA-led team announced that organic compounds in the rock appeared to have been left by living creatures.  The takeaway was that this was evidence of Martian life, or had been.  However, other scientists (including me) have been skeptical and researchers chipped away at that premise over the decades, most recently by a team led by the Carnegie Institution for Science’s Andrew Steele.

In fact, the organic compounds found in the 4 lb. rock were formed by water - probably brackish or briny - flowing through the meteorite (see image below Mars photo).  This was according to a study published last Thursday in the journal  Science.   The conclusion has to be a bummer for alien hunters, i.e. the compounds were not left by any living organisms - as the earlier (1996) theoruy posited but rather the compounds' presence suggests Mars itself is capable of forming the organic chemistry that can potentially lead to a primitive life form.  According to Dr. Steele, quoted in the WSJ (1/21):

"The results are tremendously positive.  What we've found is a non-life chemical reaction that makes potential building blocks to life."

The 4-pound (2-kilogram) rock was found in Antarctica in 1984.  During Mars' wet and early past billions of years ago, at least two impacts occurred near the rock, heating the planet's surrounding surface, before a third impact bounced it off the red planet and into space millions of years ago. .Groundwater moving through the cracks in the rock, while it was still on Mars, formed the tiny globs of carbon present, according to the researchers. The same thing can happen on Earth and could help explain the presence of methane in Mars' atmosphere, they said.

How did Steele's team arrive at their findings?  They used minute sample slices - often smaller than a few dozen microns - or thickness of a strand of human hair, This was to analyze the carbon-rich compounds created as water flowed through the hot rock billions of years ago and interacted with the minerals in the rock.

But as usual, findings or conclusions in science are  seldom final.  In fact, two scientists who took part in the original  1996 study took issue with these latest findings, calling them “disappointing." In a shared email, they said they stand by their 1996 observations.  According to Kathie Thomas-Keprta and Simon Clemett, astromaterial researchers at NASA's Johnson Space Center in Houston:

“While the data presented incrementally adds to our knowledge of (the meteorite), the interpretation is hardly novel, nor is it supported by the research.  Unsupported speculation does nothing to resolve the conundrum surrounding the origin of organic matter in the meteorite",

Did Steele get angry?  No. He commended the measurements by the original researchers and noted that their life-claiming hypothesis “was a reasonable interpretation" at the time. He said he and his team — which includes NASA, German and British scientists — took care to present their results “for what they are, which is a very exciting discovery about Mars and not a study to disprove” the original premise.

This finding “is huge for our understanding of how life started on this planet and helps refine the techniques we need to find life elsewhere on Mars, or Enceladus and Europa,” Steele said in an email, referring to Saturn and Jupiter’s moons with subsurface oceans.

The only way to really prove whether Mars ever had or still has microbial life, according to Steele, is to bring samples to Earth for analysis. NASA's Perseverance Mars Rover already has collected six samples for return to Earth in a decade or some three dozen samples are desired.

So like it or not we may well have to await further empirical work for the final verdict.