The diagram for Problem 1 is shown below, including the angle of maximum elongation: 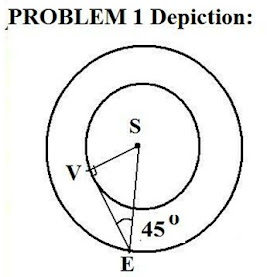 2) A recent observation of Mars 36.5 days after opposition showed an angle of elongation = 136 degrees. Find the distance of Mars from the Earth if Mars' orbital period = 687 days.
Solution:

The diagram for the configuration is shown below: 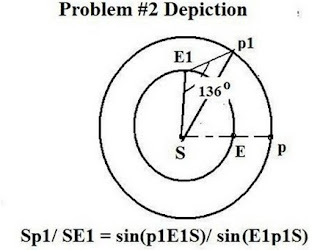 which is none other than angle E1Sp1.

Now, angle E1p1S is required in order to get the distance - as the information at the bottom of the depiction shows.

and, the ratio of planetary distances at time t:

Posted by Copernicus at 5:30 AM