"Bonds cheated himself out of what would have been an excellent chance for a plaque in the HOF. He also cheated Henry Aaron out of his rightful place as career HR leader. For that alone I hope it proves that he will never make into the Hall...." Commenter on Washington Post

The great news this a.m. is that steroid cheater Barry Bonds  will be kept out of the Hall of Fame again and given his results (260 votes, 66%), perhaps permanently. Under current standards (75% acceptance) he could not rally sufficient support to earn induction. He’ll now fall off the writers’ ballot – the Hall in 2014 reduced the number of eligible years from 15 to 10, significantly harming his future prospects – and will be at the mercy of the 16-person Today’s Game committee, which can consider them twice every five years

Why the hell poison the Hall and its creds by the admission of the faux home run king ?  And by the way any list with Barry Bonds name gets an asterisk * added - at least for me!  Especially given that one of the criteria for admission, when one examines them, is integrity.  Does Bonds have any? Absolutely not.  As for his "home run record" I still regard all Bonds' homers over 500 as bogus while Henry Aaron retains the real record (755). Why? Because Aaron earned it the old fashioned way, hard work, plenty of effort, no drugs, no bennies, no steroids, or other crap- just those powerful 8" wrists.    Bonds, meanwhile, resorted to steroids to put on muscle mass to attain his HR record. (Bonds has denied knowingly using performance-enhancing drugs but was convicted of one count of obstruction of justice for giving an evasive answer in 2003 to a grand jury investigating PEDs).

. In 1954, Aaron came to the Milwaukee Braves from Jacksonville in the Sally League.  While living in Milwaukee - barely a mile from County Stadium - both Aaron and teammate Ed Matthews soon became household names as multiple TV spots (on WTMJ) announced these powerhouse sluggers in the Braves' lineup.  One afternoon, in early April my dad came home bolting through the door and yelling: "Boys, you have to see this!"

We (Johnny, Jerry, me) bolted into the living room wondering what the big deal was. Then we beheld a Kellogg's Corn Flakes box top with two names scribbled in black ink across:

Dad then apologizing, "Sorry! All I had was this cereal box for them to write on!"

No problems, dad! From then on I followed the Braves religiously, watching Braves' games nearly every Saturday - until we moved to Miami in January, 1956.  But in Miami - amidst dozens of NY Yankees fans at the parochial school we attended - I still rooted for the Braves. And relished it when they put the Yanks down in 7 games in 1957, with pitcher Lew Burdette the standout.

The final game in which I saw Aaron play was in August, 1976, while Janice and I were on a visit to Milwaukee after our wedding the previous August.  We got two tickets to the game between the Oakland A's and Milwaukee Brewers at County Stadium.  We were lucky to catch one of the most exciting games in memory - from a triple play, to an inside the park homer, a balk, and a full out, bench-clearing brawl.   Here's the headline for that game, which I kept a clipping of: 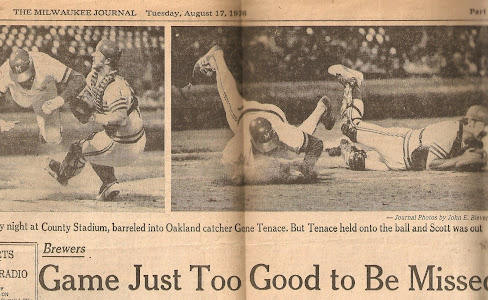 There is no doubt Aaron's history propelled my love of the game even encouraging me to join the Chaminade High (Hollywood, FLA) team in the spring of 1961. And pitching my first game for the Chaminade Lions.  When Bonds emerged and broke Aaron's record I became suspicious and the more I subsequently learned the more I didn't like, especially as reports grew on how much muscle mass he had put on in a brief time in the 90s.

Hal Bodley, a former sports columnist for USA today put into words (in 2012) what many of us have felt about Barry Bonds and the Hall of Fame:

"I'm not going to vote for anybody who has been tainted or associated with steroids. I'm just not going to do it. I might change down the road, but I just love the game too much. I have too much passion for the game and for what these people did to it."