"Shingles is a viral infection that causes a painful rash. Although shingles can occur anywhere on your body, it most often appears as a single stripe of blisters that wraps around either the left or the right side of your torso.

Shingles is caused by the varicella-zoster virus — the same virus that causes chickenpox. After you've had chickenpox, the virus lies inactive in nerve tissue near your spinal cord and brain. Years later, the virus may reactivate as shingles."

The account included the image below showing the painful Shingles blisters - 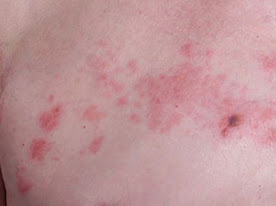 These "usually develop as a stripe of fluid -filled blisters that wrap around the torso".  The pain is incredible because the blister eruptions are directly tied to nerves which the virus has invaded,  e.g. 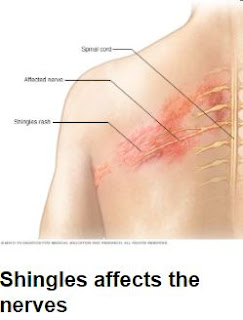 This is also the reason for the searing pain, described sometimes as akin to a trail of fire ants stinging along the blister tracks.

If your age is 60 or older the disease can lead to serious complications.  Two years ago Janice, who had chicken pox as as an adult (in 1990, contracted after a trip to Disney World), opted to get a new recombinant vaccine called "Shingrix" which had replaced an earlier - less effective - vaccine.(Zostavax)

She experienced some harsh side effects after the 2nd shot, mainly fever, body aches, nausea and arm pain - but told me it was worth it to avoid Shingles- which tormented her mother.  I told her I wasn't worried, as I didn't believe I had much chance of getting it.  I had chickenpox as an 8-year old kid so I believed that made it less likely I'd get Shingles as an adult. I ought to have paid attention then, because it is known that once you get chickenpox the virus then enters your nervous system and lies dormant - ready to spring into action.  All it takes to reactivate and travel along nerve pathways to your skin is a compromised immune system (like after a cancer treatment) or stress.

It wasn't until two weeks ago I got my wake up call when my sister sent me images of her husband's erupting blisters, and emphasized the agonizing burning pain that made them literally unbearable to any pressure. They lined his upper back in angry red tracks and made it impossible to lie down on his back.  I took one look at them, and then the emphasis that he also had chickenpox as a kid - and realized I'd played the fool overly long.

I had to now get the Shingrix shot - as my sister did - to avoid becoming another Shingles statistic.  Yep, I had just had the 2nd Moderna Covid vaccine a little more than a month earlier, e.g.

But now I had to bite the bullet and get this next vaccine. There was no other option, not after seeing the hell and havoc wrought by Shingles on my brother-in -law.  The main side effect was having a left arm that felt as though it had been whacked with a Louisville Slugger.  That and some mild nausea and a fever at night.  But like the 2nd Covid jab, it was worth it to avoid the "virus from hell".

The RN at Dublin Primary who delivered the jab yesterday morning told me I was "very smart" to act.  She noted these additional aspects of the Shingles virus I might not have considered:

- Shingles can lead to pneumonia, blindness and brain inflammation (encephalitis) and death.

- The most common long term complication is nerve pain known as postherpetic neuralgia. (PHN)  This nerve pain is associated with the rash an remains even after it has cleared up.

-   Older adults who develop Shingles are more likely to get PHN and also suffer longer lasting and more severe pain than a younger person who gets Shingles.

- The virus that causes Shingles can spread and cause chickenpox in someone who has never had the disease, or received the vaccine.

- About 1 in 6 who get the vaccine experience side effects so severe they cannot carry out regular daily activities.

The last didn't matter to me.  I just wanted to avoid a future case of Shingles.  I have my sister to thank for giving me a wake up call.

The takeaway here?  Don't procrastinate like I did.  If you had chickenpox- as a kid or an adult-  you need to get this vaccine.  The advice, btw, is to delay for at least one month after you've had the 2nd Covid vaccine (if a 2nd was necessary)

https://www.webmd.com/skin-problems-and-treatments/shingles/ss/slideshow-shingles-pictures
Posted by Copernicus at 6:39 AM