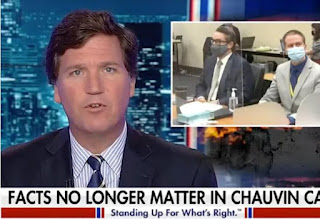 "Everyone knew what the consequences of acquittal would be, after a year of bombing, burning and murder by the BLM movement... So can we really trust this decision? And that the same standard of justice applied here will also apply to the cop that shot Ashli Babbitt?"  - Tucker Carlson, last night on FOX, 'Tucker Carlson Tonight'

The irrepressible FOX News maggot- host Tucker Carlson has rightly come under fire for accusing the media of “lynching” Derek Chauvin, the Minneapolis police officer on trial in the death of George Floyd.

Claiming that most Americans “still cannot say with any specificity just how” George Floyd died,  despite the fact Darnella Frazier's 10 minute video provided powerful,  direct evidence of a brutal murder.  That video clip, now seen millions of times around the world, represented an irrefutable act of bearing witness - though the asswit Carlson is too dumb or deranged to see it.  As the fool babbled on:

“The closing arguments are a chance to assess actual evidence in the case, and you would think that would be good news, more facts, which we could always use."

But this lying little monkey has never had respect for facts, as when he claimed masks are useless, and called into question the usefulness of  Covid vaccines.  (Probably in no small way contributing to white Repuke males avoiding the vaccines.)  Meanwhile, the facts of Chauvin's crime - for anyone with an ounce of perception, decency or sense - had the equivalent effect of being hit with a sledge hammer.  But not for Carlson who went on to whine:

"But, no, said the media. Facts no longer matter, not when [Black Lives Matter’s] founding myth is at stake. Evidence only counts in countries that have due process, something they are now telling us is an ugly relic of institutional racism,”

“When unpopular people seem guilty, you just go ahead and punish them, that’s the new rule. Years ago we called this lynching, now we call it equity.”

No,  you bottom feeding asswit, we call it justice and accountability.   And to even mildly suggest "lynching' in the Chauvin case is to repudiate one's claim to history, reason and intellectual integrity.  But then Carlson never had a nanobyte of that to begin with.

This twaddle also perfectly fits Carlson, long a hero of white nationalists (like the Proud Boys) , racist slime and other imps. He delivers high amperage almost every night and they love it.  (Recall barely 2 weeks ago The Anti-Defamation League called on Fox News Media CEO Suzanne Scott to fire  Carlson  after he pushed a white supremacist meme  about the "great replacement.")

The most odious aspect of Carlson's rant was insinuating the nation had a "gun" held to its head and acquittal was therefore a foregone conclusion, else Black Lives Matter would be "burning, bombing and murdering".  After all, look what the various cities were preparing for, with boarding up businesses, calling out National Guard etc.   This baloney narrative was supported by another Carlson guest- a token black conservo by the name of Candace Owens. She had the nerve to claim Democrats were using mob violence and a complicit media to increase political power.

Then  Carlson had the gall to assert we are "nearing the end of our civilization" and "no mob has the right to destroy our cities".  Adding,  "No politician or media figure has the right to intimidate a  jury. If this continues to happen decent, productive people" (white people?) will leave the country.  If the insanity doesn't stop, America will be over."

Yeah, right, and what insanity is Tucker fomenting?  That's the question that needs to be asked and answered. Anyway, which country will these disaffected  "productive" whities high tail it to?    In any case, Carlson is off his rocker,  especially when he also demanded the Capitol  policeman who shot Ashli Babbit "must be held to the same standard as Derek Chauvin".  The difference is that Babbitt was an insurrectionist lawbreaker, who sought to invade the inner chambers of the Capitol and hang lawmakers.  In other words, she was no George Floyd. Also, the Capitol cop who shot her was charged with protecting the lawmakers, so doing his damned job.  Let us acknowledge that shooting stopped the mob's most malicious and violent attacks - and thereby began a retreat - until backup  National Guard could restore order.

Conservatives and the Right
The Making of a Right-wing Martyr: Conservatives Treat Derek Chauvin's Conviction as an Act of War

Conservatives could have easily clung to Chauvin's conviction as an "exception that proves the rule" situation, insisting that because they condemn him, no one should call them racist. It would have been a lie, but occasionally cutting loose the worst members of their tribe has long been a winning strategy for the right.

But nah, instead they're turning a dead-eyed murderer like Chauvin into a martyr. And in doing so, they're removing the last shred of plausible deniability that "blue lives matter" and the criticisms of Black Lives Matter was ever about anything but stone-cold white supremacy.

Insisting that Chauvin was the hill to die on made the leap from the unapologetically rancid fringes to the Fox News talking heads in a record amount of time..

Turning Chauvin into a martyr of the "woke mob" is not just sociopathic, but seems like it would be bad political strategy. It's like trying to turn Ted Bundy into some hapless victim of a castrating feminist mob.