Bimbo Boebert To Cancer Patients: You Ain't Worth Running Up The National Debt 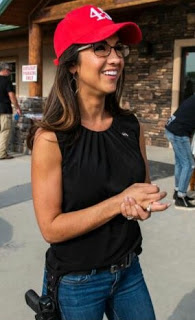 Boebert near her 'Shooters Grille' Restaurant

"Rep. Lauren Boebert is the perfect performative politician, and it’s not doing her Colorado district any good.

As far as I can tell, there are few words that come out of Boebert’s mouth or her Twitter feed that aren’t borrowed pieces of rightwing propaganda designed to keep her supporters foaming at the mouth and clicking the “donate” button on her website. She insists on weighing in on every controversial issue du jour — taking a “What Would Trump Tweet?” approach to her communications — all to put herself in the spotlight.

Boebert has no legislative accomplishments to tout... All hat and no cattle? Boebert is all title and no text."

The bellicose bimbo and Colorado HS dropout Rep. Lauren Boebert again raised eyebrows Thursday night by voting against a bill to reauthorize the National Marrow Donor Program.   This is the  highly beneficial program for cancer patients (leukemia and lymphoma)   which matches donors of bone marrow and cord blood.  Without it, many thousands of cancer victims -- kids and adults - would not have had a chance

While the legislation passed the House by a vote of 415-2,  Bimbo Boebert and the deranged QAnon fruitcake Marjorie Taylor Greene, gave the bill a 'thumbs down'.   Greene simply didn't accept any likely users would have voted for Traitor Trump - Insurrection Inciter- so voted 'nay'.

While Boebert’s office didn't respond to a request for comment,  the Reaptard from Silt, CO informed CNN that she opposed the bill because it "adds to the national debt", did not go through the committee process.  Nor was it "analyzed" by the Congressional Budget Office, the agency which determines how much money a bill will cost.

All of this performative puppetry ignoring the fact the humanitarian program has basically been allowed a pro forma adoption, to more expeditiously assist cancer patients in need - and with limited time horizons.

On Friday, the loudmouth.  brash Bimbo tweeted in full her reason for not voting on the bill

“I’m not voting  for bills that don’t go through committee and add hundreds of millions of dollars to the national debt,”

The bill — H.R. 941, the TRANSPLANT Act — was passed under a suspension of the rules, a commonly used method for expediting uncontroversial legislation with humanitarian benefits. All other members of Congress from Colorado, Democrat and Republican, voted for it.   In the words of Colorado Democratic Party spokesman David Pourshoushtari :

“It is unconscionable that Congresswoman Boebert would stand in the way of cancer patients’ access to bone marrow transplants and the cancer-fighting properties they have,”

Boebert-   a hardline Trump lubber and rabble rousing,  insurrection defender-  has voiced frustration in recent weeks at what she sees as political inaction on immigration and a flood of child migrants at America’s southern border.  She would prefer all of these kids be tossed back into Mexico to fend for themselves - drug cartel predators be damned.

She actually admitted Friday that the ongoing  frustration had influenced her vote on helping cancer patients, e.g.

“I’m done spending away our children’s future, voting on sesame seeds and whatever else Pelosi wants while we have a humanitarian crisis at our border,”

And yet the brash little bimbo was just fine spending tons of Coloradans' tax money to support her campaign circus and caravan.

(She also voted Wednesday against a bill requiring food companies to label when a product has sesame seeds, to which an estimated 1.5 million Americans are allergic. )