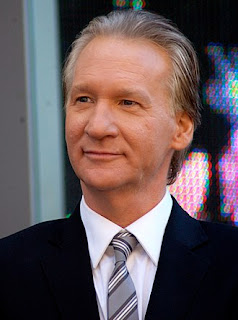 Before dealing with yet another of comedian Bill Maher's MJ-induced brain farts from Friday night (that the left has as many false beliefs about Covid as the Right), we need to remind readers again of the insidious dangers of false equivalence.   Thus, it is insipid and derelict to compare one poll response from progressives - to the effect that "50 percent of Covid cases are hospitalized" to the Right's idiocy that "Covid is no more serious than flu" or "the vaccines are designed to kill you over time".

The first is simply an error of magnitude in estimating ICU impacts  and is essentially innocuous.  Believing it does not make people less safe or prevent herd immunity from being reached.  (Maher pointed out the actual proportion of those hospitalized with Covid is 5 % or less.  To which I reply, So what? )

The fact is  our private healthcare system was not designed to absorb  even a 1% increase in  hospital Covid intake. After all, there are less than a million staffed hospital beds in the U.S.  Thus, the gross overestimate of hospitalization rate by the left respondents is simply an understandable  reflection of this reality. Whatever "misinformation" is at work is not going to kill people - say like believing  Covid vaccines are deadly, or Bill Gates wants to implant nanobots in unsuspectng yokels. Or believing Covid is a "hoax" or "no different from flu."

Basically,  the wrong assumptions on the Right kill while those on the left add a level of safety and so are inconsequential. (People believing it ought to be more inclined to mask up and do whatever to avoid the ICU!)  So Maher's rant in the context he spoke is deceiving and in effect misinformation.

The conclusion here?  While Maher generally directs his New Rules rants to embody a degree of intellectual honesty, this segment was totally lacking in any.  It was a mere slapdash effort to try to win more libertarian fans, or maybe even  right wingers.

While, for the most part, Maher's data is accurate, data does not exist in a vacuum, and without taking all factors into account, it can actually be no better than a lie.  That includes downplaying the false Repuke GOP beliefs about COVID and the vaccines, and inflating the dire consequences of left's overestimate of hospitalization rates.

Further, Maher tends to treat the CDC directives that were on the cautionary side as lies if their caution was unwarranted. Really? If one is working from a position of not knowing-  as with Covid- 19,  then one always errs on the side of caution. People are then so informed via cautionary directives as the CDC did.

He did get it right that the mainstream media has prostituted COVID to the point that in America even good news is spun as bad news or diluted with bad news, i.e.

True, but we've known all that from the year dot. That does not give you license to pooh pooh or diminish the findings of science or try to portray Covid as only affecting a certain category of "health issue" citizens - as I had to ring Maher up about earlier, e.g.

It is clear that many are getting fed up with Maher's shtick now, especially in forums on Daily Kos, and Reddit. One Reddit guy even asserting "I've had enough of Maher!"   Another on Daily Kos weighed in saying that "Maher is just another libertarian trying to echo their nonsense, and validate it."

I'm not done with Maher yet as he does have generally good, thought-provoking panel discussions (and one -on- one lead interviews) .  But as wifey said after his last New Rules: "He needs to pull his head out of his ass and do his homework before spouting off for a change."