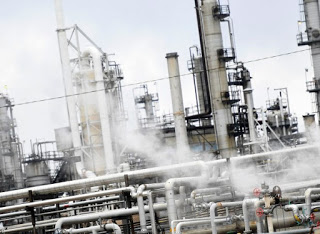 Suncor refinery- one of main sources of air pollution in Colorado

The pollution contributes to the unhealthy levels of ground-level ozone for which Colorado has been deemed a serious violator of federal health standards.

Among the allegations in the complaint filed by the Maryland-based Public Employees for Environmental Responsibility (PEER) on behalf of the three state employees: managers told a Colorado health department modeler to falsify data from a Teller County gold mine “to ensure that no modeled violation would be reported.”

State health officials declined to discuss the complaint upon inquiries from The Denver Post.  Instead, Colorado Air Pollution Control Division spokesman Andrew Bare sent The Post a statement saying that, because officials are “going through a formal process” of examining employees’ claims, they cannot address details."

Adding: , “Our modeling policies are in accordance with federal and state  laws and we have carefully reviewed the relevant laws in consultation with both the Colorado Attorney General’s Office and the federal Environmental Protection Agency.”

So they claim, but bear in mind the Trumpies had degraded EPA regs. The whistleblowers’ complaint, sent to the EPA’s current inspector general, seeks a federal performance review and audit of Colorado’s Air Pollution Control Division. This division relies partly on EPA funding, and penalties could include loss of funding and of the federally designated authority for Colorado to issue permits that say how much pollution companies can emit into the air.

According to the complaint, air pollution division managers’ violation of the law is “contributing directly to chronic health problems, premature deaths and severe injury to the environment by permitting ever more dangerous emissions.”

Letters from PEER (a national legal organization dedicated to protecting environmental whistleblowers) to Gov. Jared Polis, state health department director Jill Hunsaker-Ryan, and four state lawmakers pointed out that disclosures made by state employees are governed by the Colorado Whistleblower Protection Act, which forbids retaliation against those who report legal violations. The attorneys asked to meet with Hunsaker-Ryan.

State air division supervisors apparently removed a guidance document for air quality permits from a state website in March and did not issue a public notice of their policy shift.

Victims in Colorado include “everybody who breathes the air,” according to attorney Kevin Bell said for PEER.

The 14-page complaint to the EPA inspector general — signed by state health department employees Rosendo Majano, DeVondria Reynolds and Bradley Rink — said the consequences of their agency’s relaxed permitting policy and a “culture of permitting at all costs” can be seen in the handling of specific industrial facilities.

Let's recall here that one such "industrial facility" - Suncor -  has been the original "bad boy actor" in multiple state offenses.  The original catastrophic environmental event on Dec. 11, 2019 was hoped by many to be the last. But that was not to be.  The refinery continued to malfunction, as reported in a Denver Post expose piece (Nov. 29., 2020  p. 8A).  Therein we learned that Suncor  over 2020 had "reported 34 malfunctions  and 111 pollution spikes lasting from a few minutes to several days."  All of these spikes  violated permit limits and added to the more than 396 pollution spikes in 2019,  during 35 malfunctions.

In terms of litigation, Colorado health officials in March announced the latest settlement to resolve complaints concerning failures between 2017 and 2019.   These required Suncor to pay $1.4 million in penalties and $2.6 million to fund community environmental projects and spend up to $5 million on fixing problems.   Most of these involved excessive sulfur dioxide emissions and toxic ash events.

Commissioner Elise Jones nailed it when she told the Post (ibid.):  "It is hard to stare down the most powerful industry in the world and say, 'We need you to go away'. But we have to recognize that it is a global problem, and we cannot export the problem somewhere else and think we are solving anything.  We have a responsibility for all of the climate emissions that are enabled by our state."

This dovetails with the stance of Gov. Jared Polis' administration who have declared they will shift the state off fossil fuels in favor of wind and solar energy, and electric vehicles.  Lawmakers last year "ordered 26 percent cuts in statewide emissions of heat-trapping greenhouse gas pollution below 2005 levels before 2025.  Also, by 50 percent by 2030 and 90 percent by 2050."

That is a tall order to be sure and I'm skeptical it can be achieved as our state population keeps growing.  It more comports with a dramatic reduction in the population by the same proportions - for each of those deadline years.

For now, the biggest concern of environmental groups as well as state health officials, is the "lagging maintenance of the refinery infrastructure and facilities."  This lagging maintenance is probably responsible for 80- 90 % of all the pollution issues,  but the cost for upkeep of standards is likely well below what Suncor is willing to spend.   As Adams County commissioner Steven O'Dorisio put it (ibid.):  "If they cannot keep up now, how can we be sure they will keep up later?"

That is the question Colorado state environmental officials and regulators now need to address.