Mysteries Of Muons Come To The Fore - Is A Novel Force Of Nature At Work? 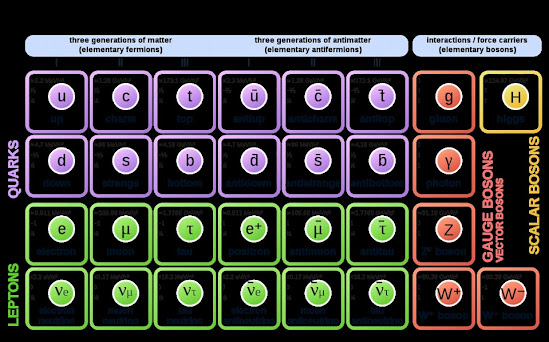 The muon is familiar to particle physicsts as a heavier, unstable sister of the electron. Muons are created when cosmic rays collide with particles in the Earth’s atmosphere. They are able to pass through matter, and researchers have used them to probe the inaccessible interiors of structures from giant volcanoes to the Egyptian pyramids.

Like electrons, muons have an electric charge and generate minuscule magnetic fields. The strength and orientation of this magnetic field is called the magnetic moment.(expressed in general as:  m ℓ z = - g(ℓ) u B  m ℓ)

Enter now the Standard Model (see graphic) which contributes to the muon’s magnetic moment in terms of the actions of specific component particles. For decades, physicists have relied on and have been bound by the Standard Model, a suite of equations that enumerates the fundamental particles in the universe (17 by last count) and the ways they interact. It successfully explains the results of high-energy particle experiments in places like CERN’s Large Hadron Collider. But the model leaves deep questions about the universe unanswered, and most physicists believe that a rich trove of new physics waits to be found, if only they could see deeper and farther.

Further,  each does so in multiple different ways. Physicists very precisely know how electromagnetism and the weak interaction do so, but determining how the strong interaction contributes to the muon’s magnetic field has proven to be incredibly difficult.

Of all of the effects that the strong interaction has on the muon’s magnetic moment, the largest is also hardest to calculate with the necessary precision.   Particle physicists call this largest effect the Leading Order Hadronic Vacuum Polarization.

In the past, to calculate this effect, physicists used a mixed theoretical–experimental approach. They would collect data from collisions between electrons and positrons – the opposite of electrons in charge – and use it to calculate the strong interaction’s contribution to the muon’s magnetic moment. Physicists have been using this approach to further refine the estimate for decades. The latest results are from 2020 and produced a very precise estimate.

This calculation of the magnetic moment is what experimental physicists have been testing for decades. Until April 7, 2021, the most precise experimental result was 15 years old. For this measurement, at Brookhaven National Laboratory, researchers created muons in a particle accelerator and then watched how they moved through a magnetic field using a giant, 50-foot-wide (15-meter) electromagnet. By measuring how muons moved and decayed, they were able to directly measure the muon’s magnetic moment. It came as quite the surprise when Brookhaven’s 2006 direct measurement of the muon’s magnetic moment was larger than it was according to theory.

Faced with this discrepancy, there were three options: Either the theoretical prediction was incorrect, the experiment was incorrect or, as many physicists believed, this was a sign of a hitherto unidentified force of nature.

One new approach produced an estimate of the strength of the muon’s magnetic field that closely matches the experimental value measured by the Brookhaven scientists. It essentially closed the gap between theory and experimental measurements and, if true, confirms the Standard Model that has guided particle physics for decades.  Obviously, this would be the most desired outcome since it doesn't upset the theoretical "applecart"

Enter Fred Gray, a professor at Denver’s Regis University and chief of the Department of Physics and Astronomy, who has been on the front lines of this work for about a decade. Gray and his team of undergraduate Regis students over the years largely have been working on data quality control, ensuring only high-quality data are included.  And it was these recent results released 2 weeks ago.  In Gray's own words:
“This has been something I have been thinking about for decades. I’ve had to keep my mouth closed for too long, about a month or so, and now I’m able to talk to people about this. You would think that knowing a secret about the universe that very few people know would be empowering, but it isn’t because you want to share it with everyone.”
The Regis researchers first announced their findings from the experiment, called Muon g-2, in a virtual seminar and news conference last Wednesday. The results are being published in a set of papers submitted to the Physical Review Letters, Physical Review A, Physical Review D and Physical Review Accelerators and Beams.  Graziano Venanzoni, a spokesperson for the FermiLab collaboration and a physicist at the Italian National Institute for Nuclear Physics, said in a statement issued by Fermilab:
“Today is an extraordinary day, long awaited not only by us but by the whole international physics community,” .
Statistical analysis shows the measurements have about one chance in 40,000 of being a fluke.  This denotes a statistical status called “4.2 sigma.” That is still short of the gold standard — “5 sigma,” or about 3 parts in 10 million — needed to claim an official discovery by physics standards.
Promising signals disappear all the time in science, but more data is on the way that could put their study over the top. The recent results represent only 6% of the total data the muon experiment is expected to garner in the coming years.  In the words of Renee Fatemi, a physicist at the University of Kentucky:
“This quantity we measure reflects the interactions of the muon with everything else in the universe. This is strong evidence that the muon is sensitive to something that is not in our best theory.”
That the results agreed with similar experiments at the Brookhaven National Laboratory in 2001 have teased physicists ever since. At a news conference one particle physicist  was quoted as saying:
“After 20 years of people wondering about this mystery from Brookhaven, the headline of any news here is that we confirmed the Brookhaven experimental results."
He then pointed to a graph displaying white space between the theoretical prediction for the muons’ behavior and the new findings from Fermilab. noting:
“We can say with fairly high confidence, there must be something contributing to this white space,”
Adding:  “What monsters might be lurking there?”
Well, maybe nothing,  at least until the parameters of that "white space" are fully defined and a full error analysis is undertaken.
Other scientists, like the ones at Fermilab, have chosen to test the second option: that the experiment was off.   To me this is the option that makes the most sense, and the one which will need to be most rigorously tested.

At Fermilab, physicists have been continuing the experiment that was done at Brookhaven to get a more precise experimental measurement of the muon’s magnetic moment. They used a more intense muon source that gave them a more precise result. It matched the old measurement almost perfectly.

The Fermilab results strongly suggest that the experimental measurements are correct.  Where we go from here will mark the unfolding story of a unique relationship between experimental and theoretical physics.

What part muons play in the overall pattern of creation is still a puzzle.  Columbia University physicist I.I. Rabi once asked:

When muons were first discovered in 1936. Nowadays, muons are produced copiously at places like the Large Hadron Collider when more ordinary particles are crashed together at high energies.

Posted by Copernicus at 7:07 AM