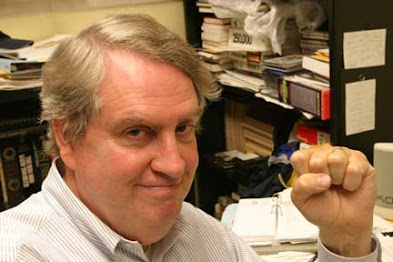 McAdams about 24 years ago doing a fist bump after nearly destroying a usenet newsgroup on the JFK assassination with which he didn't agree.

John McAdams, one of the more prolific JFK assassination lone nutters and disinformationists (regarding conspiracy in the hit) reportedly died Thursday - confirmed by Marquette University.  According to the obit report in The Milwaukee Journal -Sentinel appearing Saturday night:

The circumstances surrounding McAdams' death were not immediately clear late Thursday. He was 75, according to his author page at the U.S. Library of Congress.

McAdams was a professor at Marquette for nearly 45 years, and was a globally-recognized scholar on the assassination of President John F. Kennedy. He taught courses on American politics, public opinion, and voter behavior.

McAdams was probably most widely known for being at the center of a highly-politicized debate over freedom of speech and academic freedom, which started in November 2014 when he posted his thoughts on whether a Marquette graduate student instructor had barred a student from discussing an opposing view toward same-sex marriage during class.

McAdams posted his views on his personal blog, the Marquette Warrior, naming the graduate student instructor and listing her contact information online.

Marquette suspended McAdams and the professor sued. He ultimately won his case before the Wisconsin Supreme Court, which ordered Marquette to immediately reinstate him. He had spent seven semesters on suspension at that point."

Let's note a couple of points regarding this summary, starting with the "free speech"  (actually abuse of free speech) case he won vs, Marquette:

-  Basically, he "doxxed" a graduate teaching assistant because she objected to a student's inflammatory depictions of same sex marriage in her class. The rejection of his case ought to have been a slam dunk but the Wisconsin Supreme Court- loaded with right wing apparatchiks - gave him a pass.  They took no note, none, of how the grad teacher was harassed and even threatened after McAdams posted her telephone no. and email on his blog.  This case was a travesty and McAdams never should have been reinstated.

-That McAdams is designated a "globally recognized scholar"  on the JFK assassination is a peculiar attribution given the man has produced one unscholarly propaganda book: 'JFK Assassination Logic: How To Think About Claims of Conspiracy' - which is basically a disinformationist's 'bible'.  A few Amazon reviewers' comments, all from members of the serious  research community:

"If you are a beginner to the study of the JFK assassination, I suggest you do not waste time with this book. The author is one of the least respected JFK researchers and I do not think this book has much to offer either in regards to understanding the 1963 Coup d'Etat or with developing your critical thinking skills."-  Robert Morrow

"I was seriously disappointed by this book, not merely because I disagreed with it on so many fundamental issues, but even more so because it fell so far short of its announced goals (of explaining and promoting critical thinking). I was also disenchanted that it so often merely regurgitated second hand data; McAdams appears to have done little research of his own--and none at all at the National Archives and apparently none at the Sixth Floor Museum
McAdams for a long time has pushed the discredited "lone nutter" fantasy of the JFK assassination, so it is not surprising his book has little to offer"  David Mantik, MD, PhD
"Arguably the most deceitful, error-filled book on the JFK assassination ever published. If you want to cram your brain full of mindless drivel, however, this is your best shot at doing that efficiently. Otherwise, save your time and money -- not to mention your sanity -- and buy one of the numerous books that have been written by independent-minded truth seekers, instead of this one, written by someone obviously under contract with TPTB to spread lies and prop up the myths."-  Phillip F. Nelson
"In my opinion you shouldn't trust a man who goes out of his way to run a website devoted to proving Oswald's guilt who won't allow public commentary. That's the mark of a true hack." - Brian Mumford

Most of McAdams' claim to fame derives from his usenet newsgroup antics and operations over a decade.  Long before there was Twitter, Facebook or Blogs, there was something called Usenet where entities known as "newsgroups" sprang up to encourage debate and discussion on any number of issues, topics.

I had observed McAdams putdowns in the (un-moderated)  newsgroup alt. conspiracy.jfk for some months before actually engaging in a one on one exchange with him. This was concerning my REAL FAQ  that I had published in the newsgroup as an antidote to a pro-lone nut FAQ by frequent poster John Locke.

In one particular and unforgettable confrontation, McAdams complained about my reference to Jackie “climbing over the limo trunk” in an effort to retrieve part of JFK’s blown out skull fragment (later inferred to be the Harper bone fragment retrieved by William Harper). He insisted "she wasn't climbing over anything" to which I then replied, "Ok, let's say she's moving across it to the rear - which shows a frontal shot".  He tried to "debunk"  this as well but a picture is worth a thousand words. And in the one below (from the Zapruder film - frames 313-14) readers can see the FACT of Jackie's trunk motion for themselves: 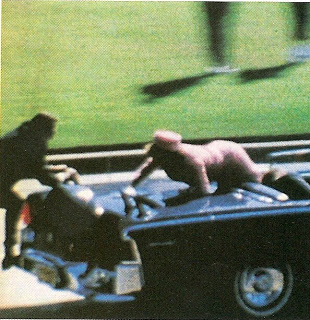 Now really, if a guy can't even admit reality when it's staring him in the bleeping face, why would one wish to trust him on anything?  No serious person should because a man who'd deny reality would deny anything  - and also stoop to say anything to serve his agenda.

For example, in conjunction with the issue of Jackie going across the limo trunk I added her Warren Commission Testimony (from Volume Five of the special hearings) where she says:

"You know, then, there were pictures later of me climbing out the back, but I don't remember that at all."

And from her secret testimony (excised from original version), op. cit., p. 16:

But once again,  McAdams disputed even the WC sources and said Jackie also must have been mistaken, as there was no time at which she climbed across the trunk. So much for  .John's "debunking" which is largely a matter of denying reality.

Perhaps the best information ever assembled on John McAdams (nee, “Paul Nolan”) was originally  put together by an Englishman named Bill McDowall.  Then reposted by  Jim Hargrove on Usenet, DejaNews and the Prouty.org site.. The basic thrust was to answer questions concerning McAdams and his background because it so much seems to fit the sort of CIA assets described in the CIA document 1035-960. (Google it!)

McAdams' last parting shot at me was 6 years ago when he questioned my qualifications to write a review of Richard Charnin's book: Reclaiming Science- The JFK Conspiracy.

I promptly swatted down that Johnno twaddle in an April 13, 2015 post.

But let's leave all diatribes there as we are advised (by the holier-than-thou) not to speak too much ill of the dead.  Suffice it to say McAdams has a lot to answer for, at least as much as the climate change deniers who've taken our planet to the precipice by their dissembling. In McAdams' case, he's deliberately helped to smother the truth  concerning JFK's murder, while character-assassinating sundry truth tellers, enabling a festering national sore to persist over a half century.

Posted by Copernicus at 6:51 AM