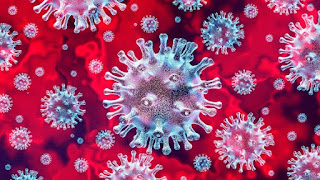 The insidious and destructive nature of propaganda flowing like a cesspool through so much social media has already been discussed in numerous posts.  While assorted ill-informed, gullible knuckleheads simply retweeting or reposting  QAnon babble are responsible for 85 percent of it,  we would be remiss if we exclude scrutiny of the more educated PR spinners and quacks who seem to be everywhere.   But mostly one finds them in the relatively more "erudite" right reactionary bastions - like The Wall Street Journal op-ed pages.  In this post I focus on two of them - one spinner and one quack - already shown to be wrong after writing nonsense about Covid some months earlier.

As Example A there is one deluded professor from Johns Hopkins School of Medicine named Marty Makary ('We'll Have Herd Immunity By April', WSJ,  February 19, p. A15).   Prof. Marty  made the classic statistical error of too many newbe's in projecting current trends (at that time of writing) into the future without sufficiently taking variables into account.   In this case, focusing on how Covid cases had dropped "77  percent in six weeks" which he then extended to become convinced cases would keep dropping leading to a "herd immunity" by April.   Well  here it is April and not only do we not have herd immunity but the variants'  (namely the B.1.1.1.7) are running amuck with  infections exploding in over a dozen states and especially in Michigan where ICUs are filling up again.    Worse, barely 1 in 4 'Muricans have been fully vaccinated meaning we've not yet won the race with Covid by a long shot.

The clear variable Makary underestimated here was the stupidity of Americans, especially the young Turks, who figured it'd be a dandy idea to pile onto Florida,  Texas and other beaches for "spring break".  Well, now they have likely carried the variant viruses all over the damned place, especially Michigan.   Then there are the red state fools- like TX Governor Greg Abbott  and Florida's Rick Desantis - who have just recklessly opened their states up while the virus variants are still raging.  Or as Dr. Fauci put it using a football analogy: "Spiking the ball on the five yard line before we get to the end zone."   Indeed, in Michigan and several other states we are also now seeing (e.g. NBC News last night) "breakout infections" in which those who have already been fully vaccinated are getting infected - by the UK variant in most cases.

Makary, supposedly this vaunted Hopkins surgery prof (which is why I deem him a spinner, not  quack),  also appears too uninformed to appreciate that any practical herd immunity has to be global.  If there's even one corner of our world where the virus is raging, that means it can spawn more variants because of increasing infections.  See s.g.

Noting:
The road to herd immunity  from the coronavirus suddenly looks longer.  The emergence of more transmissible, potentially vaccine-evading variants threatens to extend the global health disaster and make 2021 feel too much like 2020.

...the new variant circulating widely in South Africa showed signs of eluding natural immunity among volunteers who had previously survived an infection with the more common coronavirus strain

The takeaway is we are nowhere near herd immunity, not by a long shot, and despite all the spinners' happy talk.  Makary does appear to be aware of this problem as when he writes:

"The risk of new variants mutating around the prior vaccinated or natural immunity should be a reminder that Covid -19 will persist for decades after the pandemic is over."

This is an important point that needs to be underscored and repeated, i.e. that ending the pandemic doesn't mean ending Covid -19.  What is much more likely with all the variants around (the UK variant alone has over two dozen mutations thus far) is Covid-19 remains an abiding,  re-appearing yearly virus like influenza.  And like influenza there will be years when it's more or less virulent.   This means people will have to be ready to resume protocols - like masking, and social distancing - when needed, as well as getting booster shots.  Future lockdowns also cannot be pre-emptively ruled out.

Makary himself -  while making a couple valid points - nevertheless goofs up by making vapid projections that we've already seen collapse. Such as herd immunity being "well documented" in Brazil (Manaus) but now that nation is awash in graves with over 4,000 deaths per day just reported.  In the case of the U.S., meanwhile - as I pointed out- Makary was reckless in projecting a dive in cases (by ~ 77%) as a continued expectation.  Thereby assuming a herd immunity by this month - which I can assure him will not be coming for at least another year - especially as so much of the world remains unvaccinated.  Not to mention diehard anti-vaxxers in the U.S. and their political ignoramus bedfellows in the Repuke party.

Extolling the achievement of "herd immunity" in one nation is patent nonsense.  Because as long as one nation, one place, has the virus raging (like Brazil now) the whole world remains at risk. And that includes the U.S. supposedly en route to its own mythical "herd immunity". See e.g.

Hence, pandering to a belief  we're near the end of the pandemic is fostering faith in a fool's paradise. It is bare bollocks, rank idiocy.  As epidemiologist  Michael Osterholm put it on one segment of ALL In two weeks ago:  "To get herd immunity we not only have to have vaccines that are effective, but we have to have people willing to take them, or be able to get them.  Right now, that's a real challenge. For the short term, there's no hope of herd immunity in the immediate days ahead."

Osterholm, like me, doesn't expect any global herd immunity to be reached until 2023 or later.  It is simply premature to expect it even by the end of the year and Makary ought to have known better than to predict reaching it by April.  (If his WSJ publishers inserted that header and he himself believes it misleading, he needs to have a talk with them.)

Then there is a real Covid quack,  Jeremy Devine, who joins Joseph Ladipo, Scott Atlas and  John Ioannidis - other PR darlings of the Journal.  We learn Devine is a "resident psychotherapist" -  based at McMaster University in Ontario, Canada.  This quack's shtick  ('The Dubious Origins Of Long Covid', WSJ, March 23, p. A15) is that the syndrome recognized as Long Covid - with serious symptoms that go on for weeks or months - is merely "psychosomatic".   As he writes:

"A central feature underlying many psychosomatic symptoms is a fixed belief that one is ill and unlikely to recover. By drawing  attention to and legitimizing the ever present threat of long Covid, medical authorities will lead a large group of impressionable patients to believe that their Covid symptoms have not resolved and that they are hapless victims of an unrelenting illness."

In other words the suggestion of real symptoms was implanted in their heads by "medical authorities"  and if they just wake up and smell the coffee they will realize the symptoms are all psychosomatic.  A result of being "impressionable" and too easily swayed into belief by the false "legitimizing" of  Covid symptoms.   All of which shows again why psychotherapy is not recognized as an actual empirical science by most physicists.  As  astrophysicist Martin Schwarzschild once suggested to me (while attending an American Astronomical Society Conference in 1984 in Baltimore) after another attendee had made a therp joke:  "Those guys are mostly witch doctors.  Well, at least a modern version of witch doctors!"

Devine stamps himself as such when he asks at one point: "Why include the reported symptoms of those who never had a reported symptom?"  Overlooking the 15 % or more who have met the threshold, including this lot featured in one WSJ main news section feature (NOT op-ed)  from July 2, 2020: 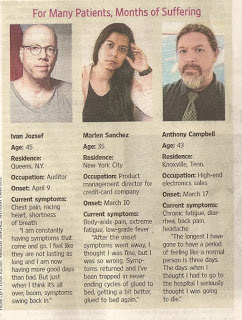 All reported suffering REAL, validated symptoms for months after the primary infection seemingly abated.   Since this WSJ piece,   a  new study by doctors from Johns Hopkins University and Harvard Medical School found that large cells called megakaryocytes may be found in the brain capillaries of individuals who died from COVID-19 infection. Megakaryocytes make platelets — part of the body’s clotting system — and these cells should not be there. In fact, these neuropathologists had never seen megakaryocytes in the brain before, and this observation had never before been reported in the medical literature.

These cells could be related to strokes observed in individuals with COVID-19, especially with long Covid.  The very reporting of such megakaryocytes attests to the widespread destruction of organs Covid is responsible for - and which is connected to long Covid.

Tens of thousands of people in the United States have lingering illness following COVID-19. In the US, they are post-COVID “long haulers.” Currently, the condition they are suffering from is known as “long COVID,” although other names are being proposed.  But irrespective of name the condition is real, as real as a heart attack.

Published studies (see here and here) and surveys conducted by patient groups indicate that 50% to 80% of patients continue to have bothersome symptoms three months after the onset of COVID-19 — even after tests no longer detect virus in their body.  But in this case, though the virus may not specifically be detected that doesn't mean that multiple organs haven't been impacted. These impacted, partially compromised organs, e.g. kidneys, brain,  heart etc.  are what give rise to the reported long Covid symptoms.

Why would a wayward, crackpot therp write such drivel for the WSJ op-ed pages?  Well, if he can convince enough readers the long Covid symptoms are all in the heads of susceptible people the specious case can be made the symptoms are not real. Hence, they do not merit being covered as "pre-existing conditions" say under any medical insurance, including the ACA.  Of course, this would make the anti-ACA denizens of the Journal damn near delirious.

There’s a dark cloud in the road back to normal. It’s too early to declare victory.

No region in the world spared as virus cases, deaths surge

In its latest weekly epidemiological update, WHO said new COVID-19 cases rose for a sixth consecutive week, with over 4 million reported in the last week. New deaths increased by 11% compared to last week, with over 71 000 reported. It is not over yet by any measure. On the day I was vaccinated for the second time, there were 73,200 new cases of COVID reported in the U.S. The more virulent B.1.1.7 variant that emerged from Britain is now the dominant strain — not the dominant variant, the dominant strain — of COVID in this country. A fourth wave of infections is well underway because of this, and states like Michigan, Minnesota, Illinois and New York are getting clobbered with new cases.

In India and Brazil, the virus is running rampant. These kinds of mass COVID petri dishes are ripe for the emergence of new and more virulent strains, some of which could very well be capable of defeating our miraculous vaccines. To our immediate north, Canada has reached Level Four on infections, the highest measurement, and the CDC recommends no one travel there without being fully vaccinated. In Vancouver, the entire Canucks NHL hockey team is under quarantine after 25 players and coaches tested positive. That’s basically the entire team.

Because of all that, it feels too early for any kind of substantive What It All Means navel-gazing. In this moment, though, I feel strangely like a survivor from the Titanic bobbing in a lifeboat in the dark North Atlantic night. The analogy is apt if you imagine that doomed ship as an allegory for the nation, a gilded behemoth encrusted with the wealthy elite, while below in steerage sat the poorest passengers, who bore the brunt of the iceberg’s wrath.

COVID was our iceberg, and it exacted a murderous price, particularly among those who exist in the steerage quarters of our modern economy.