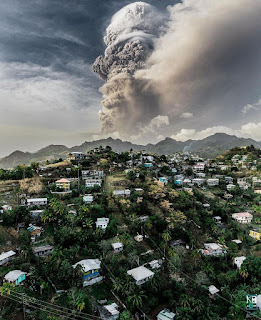 Barbadians  on Sunday were warned to stay off the roads and only venture from home if absolutely necessary. Volcanic ash and small pebbles had covered the island and rendered the skies pitch black - black as night. In one cell phone image sent from our niece Christine at 12 n0on - from inside her home-  all that was visible was a black void. Seamless, dreary blackness.   She later "What's Apped" that  the family had to use flashlights to get around. 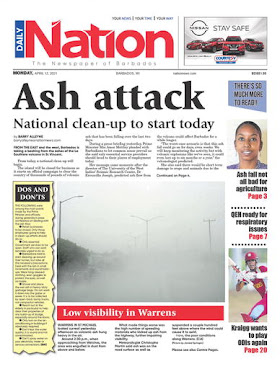 Barbados headline today from The Nation 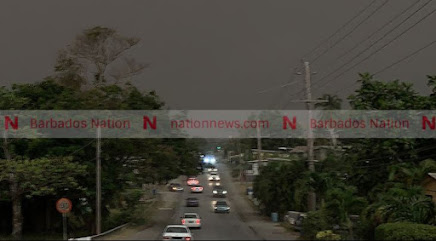 Scene just after midday on Sunday on Ronald Mapp Hwy. In Barbados.

This is now what it's like in the island nation, after La Soufriere volcano   erupted in the neighboring island of St. Vincent barely 3 days ago.   Alerts issued from the government reported the north and west of the island were especially hard hit by falling ash.   The ash in those areas could be felt on the skin and in the eyes. Our niece Inge (from Toronto) has been Covid -locked in with her sister Christine since March last year and reported her skin breaking out in rash and blisters. She has had to take anti-allergy meds and lotions to deal with it, but said it's  "like living in hell".  Our niece Trudi agreed and sent a cell phone image of her verandah buried in ash.

Another image of a car covered in volcanic ash is shown below, from the parish of St. James. 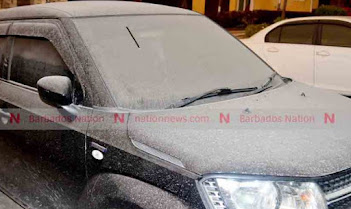 A glimpse of what driving is like can be seen in this Youtube video taken by Nation staff Sunday.
https://youtu.be/7r6WhjHgVZk

“The roads have become very hazardous with the ash fall; the lack of visibility and the surface of the roads have also become hazardous.  We would advise motorists to slow down and drive with their headlights on, even if it is daylight. The headlights are not just for you to see, but it is also for the other drivers to see you, even before they get close to you.”

“Slow down. Take your time and try not to make matters worse by becoming distracted by using a mobile phone or driving under the influences of drugs or alcohol.

Make the best of a bad situation by taking all of the precautions. Take your time. If they do not have to be out on the roads at this time, stay off. Try not to use the air condition because that will bring in stuff and might affect drivers with allergies.”

The severe ash fall made conditions appear to be like very bad weather and  drivers were advised not use their hazard lights.  According to another safety official:

“Drivers should use their headlights on low beam.  They will still need the hazard lights to be traffic indicators for turning left or right, and that will be important at this time."

Roland-Bowen  said the ash on the road caused the surface to be slippery and drivers must extremely cautious when braking.  In her advise to motorists:

“(The ash) will reduce the traction on the road.  If a driver is going to make a sudden stop, it will hamper them, so drivers must be aware that the roads are hazardous at this time.

You should not be driving with bad tyres, but if a motorist knows that they need new tyres on their vehicle, it is advisable for them to stay home and stay off the road as much as possible."

Meanwhile, in a press conference on the crisis, PM Mia Mottley expressed gratitude to the University of the West Indies Seismic Research Centre for its timely reports on the ash cloud migration and effects. 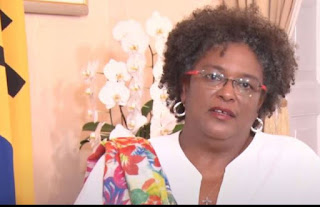 She urged Bajans not to panic despite this event being the first time "we as a nation have ever dealt with such a scale of ash fall."

Janice and I can still recall the last explosion of La Soufriere in 1979 and the ash fall then, which covered everything in fine dust.  But that event was nothing like the one currently experienced by our family still living there.  They estimated 2-3 inches of ash covering everything now, compared to about 1 cm when we lived through the last eruption.  Of course, by comparison, St. Vincent is in a state of absolute hell.

The eastern Caribbean has 19 live volcanoes, including two underwater near the island of Grenada. One of those, a "submarine" volcano named Kick ’Em Jenny, has been active in recent years.   It has also been pegged as the most likely to incept a tsunami according to the UWI seismic research center.  See the paper below,  obtained by Google search:

But the most active volcano of all is Soufriere Hills in Montserrat. It has erupted continuously since 1995, razing the capital, Plymouth, and killing at least 19 people in 1997.

Readers can track the volcanic plume as it approaches Barbados from this Google Earth link: