Has This Mensan REALLY Proven The Existence Of The Soul? Uh, No.

Claims of proof for the existence of the soul have  been made from time immemorial.  In most cases the "proofs" (e.g. Plato's)  have been exercises in abstract philosophy or simply theology. For example, Aquinas argued that soul is an incorporeal subsistent which exists despite the dissolution of the body.   At the end of the day one must still accept his proof on faith, given there is no empirical presentation or dimension.   His effort at deductive logic, i.e. only  the soul explains the human being's unity of animality and rationality - which no competing philosophy can address - is also somewhat weak. Why, after all (in light of evolution) can't animality or an animal nature include rationality?  Humans are risen apes after all.

Now, in one of the most recent efforts, Mensa member Stanley Korn professes to have finally arrived at an empirical proof for the soul ('A Proof Of The Existence Of The Soul', Mensa Bulletin, July, 2020, p. 28).  On the surface, Korn's "proof" appears somewhat impressive and unimpeachable. However, when one applies basic laws of physics it falls apart.

Let us at the outset note he is proposing a hypothetical  "thought" experiment. He does this in conjunction with assuming first the hypothesis of physicalism is valid, then showing (based on his thought experiment) it leads to a contradiction.  The basis for the operation of his device (a "matter duplicator") he describes as follows:

He then proceeds to modify the device  so that: "Immediately following the duplication operation previously described the device swaps a designated subset of the contents of Booth 1 with the corresponding content of Booth 2"

The time is sufficiently short, he assures us, that no significant change occurs to the contents of either booth during the interval other than duplication and exchange.   He then goes to the core argument:

After some further adjusting and finessing of his arguments - i.e. considering "partial" transfers of contents, brain, he gets to the nitty gritty which is basically switching the Ak + 1th atom of your brain with its counterpart (in Booth 2) which "must result in your consciousness leaving your body".  (Because Ak and Atom k + 1 together constitute Ak +1).

But not so fast!  Korn's hypothetical thought experiment is essentially exposed as flawed from the very outset.  It's exposed as first applying or accepting the conservation of mass-energy (which any empirical hypothetical must include to be credible) and then violating it. Recall the statement of that law:

“The total amount of mass-energy in the universe in a system remains constant.”

For which the corollary is:

"Mass-energy can neither be created or destroyed, only changed from one form to another."

Korn's original description more or less adheres to this principle noting that the material (or body, including brain) is duplicated in Booth 2 (after being "scanned") but then annihilated in Booth 1.  In other words, the two materials -bodies cannot exist simultaneously-   which even he seems to recognize at least initially.  If they were to exist simultaneously then we would have an additional  (equal) amount of mass-energy -  a violation of the conservation of mass-energy.  Then all bets are off and his hypothesis falls apart, because one cannot willy -nilly invoke an unphysical device or process that flouts basic laws of physics.

As one proceeds to read his subsequent descriptions of his thought experiment  - including all the various twists and tweaks - it is clear that is exactly what he is asserting!  For example:

"Now suppose you enter Booth 1, the matter duplicator is activated and a duplicate of your body is created in Booth 2. In which body would your consciousness now reside? "

But the question is a Macguffin.  There is no "which" body, since there can be only one.  Remember the one in Booth 1 was supposedly "annihilated" as he claimed - but "duplicated" in Booth 2.  (Actually the better term would be "transferred".  Its mass-energy was transferred from Booth 1 to Booth 2) Hence, there is only ONE body, the one  in Booth 2. This satisfies the mass-energy conservation law, else two bodies existing simultaneously would mean the total mass-energy in the universe had not remained constant.  This, of course, also destroys his other hypothetical, e.g.

"Now, suppose your brain is switched with that of your duplicate.  In which body would your consciousness now reside? "

Again,  there is no "which" body for consciousness to reside. There is only ONE in Booth 2-  given the original (in Booth 1) had been "annihilated".  There simply cannot be two bodies existing simultaneously because that would violate the conservation of mass-energy. Further, no machine - despite the exercise of his imagination - can be designed to violate that principle any more than one can design a workable perpetual motion machine.  Hence, a "duplication" of mass-energy is verboten under whatever guise one chooses, since it implies an additional amount of mass-energy created.

Given all this, his discussion about switching "Ak + 1" atoms becomes irrelevant because Ak + 1, or Ak, or k + 1  -  or whatever number of atoms -   cannot exist in "duplicated"  brains or bodies. Hence, it is abject nonsense to talk about "switching"   them.  Thus his statement: ""Switching a single atom of your brain with the corresponding atom of your duplicate's brain cannot result in the your consciousness leaving your body"   is similarly nonsense because - again- there are not two brains.  Neither two brains or two bodies can exist simultaneously and comport with the principle of conservation of mass-energy.

Lastly, even if his hypothetical  experiment would have been found physically realistic, his conclusion, i.e.

"Because consciousness cannot arise solely as the result of any physical entity, it must require the existence of a non-physical entity (spirit or soul)"

Would still be wrong.  This is because it overlooks the de Broglie waves.  These represent the wave mirror image of matter. When matter degenerates or corrodes-   and according to conservation of mass-energy-  de Broglie waves will survive.

The issue is whether these waves can encompass consciousness and it isn't a stretch or excess speculation to assert they can. Consider the molecules of Ca++ crossing the synaptic cleft for example, which physicist Henry Stapp has shown must behave quantum mechanically.. If rudimentary consciousness is tied to the de Broglie wave of such ions,  then those associated waves ought to be able (theoretically) to survive physical death. (Indeed physicist Stapp in the Appendix of his book, Mind, Matter and Quantum Mechanics, shows one way this is feasible. *)

We also know de Broglie waves exist.  They've been proven by experiment, such as in the Davisson-Germer set up shown below: 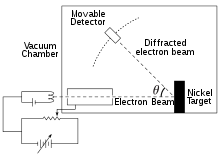 We also know that they can be tied to consciousness, as David Bohm has shown in his assorted papers, e.g. . Bohm, D. and Hiley, B.J.: Foundations of Physics, Vol. 12, No. 10, p. 1001.Thus, if the preceding template is accepted, then it is feasible that de Broglie waves could provide the basis for a rudimentary, impersonal, wave-based consciousness (albeit nonlocal) that continues after death.

The tenet of physicalism remains alive and well and Korn will have to tilt at other windmills of his mind to get satisfaction.  The moral of this story is simple:  If you are going to devise some "device" in a hypothetical thought experiment to invalidate physicalism make sure it comports with real world physics. That means real world laws of physics.  Else you are merely fantasizing, creating unicorns of your own imagination which disprove nothing, but do prove you have much more physics to learn!

where g is the Lorentz factor and m the mass. The angular frequency (w) can be written:

and the phase velocity:

must be represented as a superposition of waves. In this case also, the interference of observables emerges via:

However, if the hidden variable φ operates, viz.
φ{An} = Ã exp [iS/ h] ,
It is conceivable that dx may achieve a spread which renders superposition of states no longer applicable, say for a tiny increment or indeterminacy in time, dt.  In this case, a deterministic acausal quantum potential may act with energy:
dE » ħ/ dt

It is this energy that can be available to support a consciousness independent of corporeal matter.  The condition on the critical spread to achieve this can be expressed:
dx »  ħ/ d(mg v)

So if the velocity v approaches a critical threshold such that v  ® 0, we can have dx spread out to what is a conscious  state.
Hence, the nonlocal de Broglie-Bohm pilot wave thesis conforms with the Stapp Heisenberg Ontology in the limit of dx [d(1/lD)] ~1.
Posted by Copernicus at 6:51 AM