Another Insane "Flat Tax" Plan to Destroy What's Left of the Country! 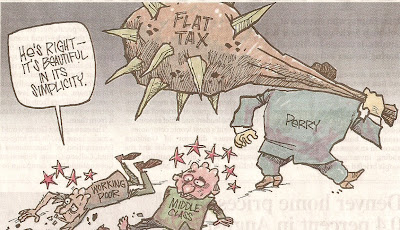 Well, it didn't take very long for another Gooper to come up with a "flat tax" plan to try to compete with Herman Cain's insane 9-9-9 plan, see e.g.

Here's the deal: the single aspect for anyone to attend to in respect of all flat tax proposals is they are not about taxation at all! Their singular and overriding purpose is to destroy the government's capacity for good, by so severely limiting revenues that the gov't is unable to assist citizens in need - while the flat tax props up a smug, conceited and ovebearing plutocracy which has already seen its median income soar over 275% since 1980 while the 99% have muddled along.

Thus, all flat tax systems have as their primo directive to "starve the beast"! If the "beast" (government) is sufficiently starved, then:

- It can't provide further benefits, and Social Security, Medicare must then be cut

- It can't provide any semblance of affordable health care by moving the privateers (e.g. insurers) out of the way

- It can't support or assist students with lower interest federal loans for college, so they will have to go to private sharks and their variable interest rates instead, and end up in a mass debtor class

- It can't regulate citizens' welfare through environmental or food, sanitation, labor protections, so more people will have to get sick and die - because they sure as shit can't afford private health insurance.

In other words, such plans support and abet a system such as we have now (indeed, make it much worse by allocating even more riches to the wealthiest) wherein government budget cuts of $861 million for families, mothers with chilidren in need of healthcare can occur while the 1% continue to reap $860 million a WEEK via the Bush tax cuts!

Perry's flat tax proposal may be even more degenerate and insane than Cain's as his singular objective (WSJ, 'Perry Joins Flat -Tax Camp', Oct. 26, p. A4) is to reduce government spending to 18% of the economy each year, down from 24% in 2010 and excluding any major defense cuts. If we process this, it means that federal benefits such as Social Security and even VA pensions would have to be halved, Medicare turned into a "Death plan" a la Paul Ryan, and key government agencies such as the EPA converted into coporate shells or disbanded completely.

One of the more insidious aspects of Perry's fell plan is that it enables taxpayers themselves to decide how fast THEY wish to destroy the government and their own future benefits. Thus, taxpayers are allowed the choice of either filing under the current system (e.g. with top marginal rates of 35% - assuming the Bush tax cuts aren't finally repealed at the end of this year), or they can pay his new 20% tax rate.

If taxpayers are clueless enough to opt for the latter, they will send this country into a massive $23 trillion deficit before 2020, though Perry insists he can "balance the budget" by then. He's nuts! The three decade analyses of overly low taxation (e.g. The Financial Times, Analysis (9/15/10 , p. 24) showed the tax cuts applied did not even curtail the secular slowdown in the growth of business structures, rather the slowdowns accelerated to full declines. Worse, growth in real gross non-residential investment barely averaged 1% (compared to 3.5%-4% in high tax years) and "an increasing proportion of the benefits of U.S. tax policy leaked outside the U.S.”

Do people really want to endure more of this bullshit? Haven't they had enough? Haven't college kids had enough of getting screwed with those high interest, variable rate private loans? Haven't homeowners had enough of the mortgage games, as bankers and especially investment bankers - bet on your failure to pay? Isn't it time to tell these fuckers to take a hike?

Perry's plan will also necessitate ripping out at least $2 trillion from Social Security monies to set up "private accounts". (He claims he will give younger wage earners the "option" of private accounts, but he has to know most are so spooked they won't see a red cent of regular S.S. that they will opt in. To the detriment of themselves, as well as everyone already in. Of course, as I noted in a previous blog, if a private account owner loses money on his investments, he can receive no higher Social Security payment than $400 minimum for most private options, such as bruited by the Bush Jr. bunch.)

Perry also claims (ibid.) his 20% corporate tax rate is "aimed at increasing private spending to create more jobs". But again, we know this is also bollocks. The largest private corporations are still sitting on more than $2 trillion in cash, and doing so in the lowest corporate tax environment (as % of GDP) since the 1980s. The way to make these bastards create more jobs is to tax their idle cash, at least at the 35% level, and also tag on a proviso that any jobs dispatched to India or China will see a an extra surtax of 50% of proposed salary on each foreign worker, but applied to the company.

Experts asked to comment on the Perry flat tax plan (ibid.) agreed it "would sharply reduce the revenue to government"

Agian, DOH! Because we know all these "tax" plans are in reality, "starve the beast" plans!

One of the experts, a Senior Fellow at the Tax Policy Center, added (ibid.):

"Two things are very clear: it will lose lots of revenue and it will give a big tax cut to the rich"

As if the rich needed any more!

I mean let's get freakin' real! How many more 'Billy the Kid' tintypes at $2 million each can these GOP wet-nursed assholes buy? How many more blood diamonds? Aren't a hundred ten kt. diamonds enough in their safes? How many more 44,000 sq. ft. homes with 8 jacuzzis? Aren't two main residences (in Long Island and Beverly Hills) enough? Do the fuckers also need two more - one in Aspen (to cavort in the winter, with fake, platinum coated snow boards) and one in Aruba - where they can enjoy $2,000 rose wine wraps each day with their champagne magnums?

I mean WHY does Rick Perry the cowboy clown want to make their lives more opulent while 22 million American kids cry themselves to sleep with hunger each night, while their moms do without their own nutrition so the kids can eat - and granny next door must do without her meds - because it's either them or food?

Haven't we had enough of this bullshit in this country?

The good thing is that the odds of this booger-pickin' asshole winning the nomination are slim and none. The bad thing is there are enough stupid, unread voters in this country (combined with the GOP's draconian campaign to suppress votiing rights) to possibly give him a chance.

Add in some voting machine fraud - such as occurred in Ohio, in 2004- and who the hell knows?

One thing for sure, if either Perry or Cain gets in, far less Romney, things will get a lot uglier than they are now!

It is certainly true that our tax system is unwieldy, hyper-draconian and ridiculous at over 73,000 pages of code, so much so that even IRS tax advisors (according to some GAO reports over the past years) are often found to give conflicting advice on assorted issues. But that doesn't mean we need to simplify it all the way down to a single rate flat tax! One can still achieve a measure of simplicity by disallowing all the loopholes and special dispensations, while alllowing a 3-tier rate system, say 40% for the top 10% of earners, 25% for the next 10% and 15% for everyone else except those earning under $15,000. They pay no tax, as they don't now (if they use the Earned Income Tax credit).
Posted by Copernicus at 9:15 AM