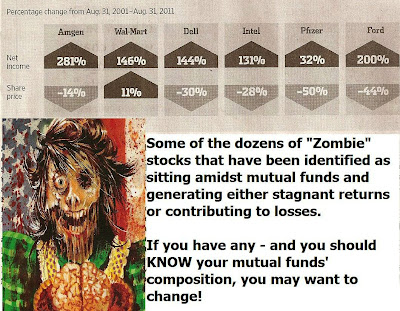 As if small fry investors didn't have enough to keep them awake at night, thinking of their 401 ks and market volatility, sovereign debt crises in Europe and possible recession at home - they now have to consider the possibility their 401ks are laden with mutual funds featuring "zombie stocks". So if this is true, they have more headaches to process, along with the shenanigans of the flash traders (who can buy back ten million shares or sell them within a half second) and market timing tricks.

According to an article appearing in the Sunday Denver Post, 'Are Your Mutual Funds Haunted by Zombie Stocks?', dozens of stocks that often appear in mutual funds have been known as "dead money". These are generally stocks that either "flatline" for years, or else tumble, even as company earnings often go upwards. Thus, small investors are often fooled by the earnings reports into thinking they have a good deal when, in fact, they are swamped with losers.

According to the research firm, Ibbotson Associates, the current decade's run for blue chips is the worst since 1968 to 1978, by the standard of dead money or Zombie stocks. Included among the long time laggards are:

- Pfizer, the biggest drug company in the world

Included at the top is a graphic, from Fact set research systems, identifying a number of the zombies and their losses over the past ten years. One of the more astounding pieces of info in the article is that "investors are currently locking up more than $2 trillion in blue chips that have absolutely gone nowhere for a decade."

As one observer, a Mr. Alan Creech of Milwaukee noted (ibid.) such stocks needn't fail outright for their shareholders to lose money. There's a huge opportunity cost involved since money tied up in zombies can't be put to work anyplace else. For example, if a shareholder had cashed in his or her Walmart stocks in 2004 and bought Costco shares instead, they'd now find themselves sitting pretty given that Costco has gone up more than 100% since 2004.

How can you know, if say you own a 401k, whether your portfolio is zombified? Several ways:

1) There are free online tools offered by 401k providers as well as ratings companies like Morningstar which enable you to find the percentage of assets concentrated in large caps, or zombie caps.

2) Search if you can (outside the 401k arena where choices are often limited) for stocks that pay dividends. My first rule now in this environment is judge stock quality by dividend payments. If they don't pay, they're usually not that great. Dividends can also buoy a portfolio even when share prices are falling.

3) Watch for evidence of turnover rate. You obviously don't want one too high, but at the same time you don't want one frozen in time. A mutual fund's turnover rate represents how often it changes the makeup of its portfolio and a higher rate means it's less likely to be saddled by a sluggish stock.

And what of the one percenters (wealthiest 1% - see prior blog) , what do they do?

Mainly flash trading, which assures they can redeem 1 million shares before a small fry can dial his speed dial to his broker or 401 k provider. Thus, they're enabled to have a much higher redemption speed and always win at that game, far beyond what their fellow flash traders call "the dumb order flow". How else do you think they can afford those lavish playgrounds for the rich I showed in the last blog? They do it at YOUR expense!
Posted by Copernicus at 2:50 PM