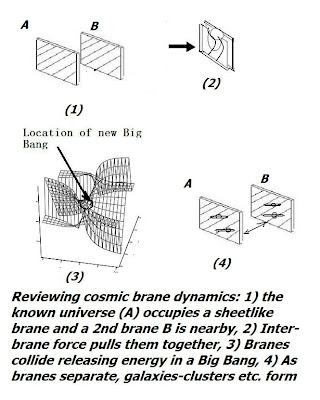 Just over three years ago, in July, 2008, I began to examine branes as possible agents in explaining the UFO phenomenon. Now, I'd like to recap some brane theory to see how it is applied to the cosmic scene, and especially in how collidng branes can account for a Big Bang.

By way of recapping some of the earlier material, I noted the following:

The basic principle concerning p-branes is one articulated by Stephen Hawking in his book, 'Universe in a Nutshell' (p. 54), that is, there exists no special preference for opting or choosing one type of p-brane over any other. In other words, a kind of "p-brane democracy' inheres, in which all p-branes are equal. As Hawking also observed (ibid.), all p-branes can be found as solutions of supergravity theories in 10 or 11 dimensions. More importantly, p-branes are peculiar to the low energy limit of superstring theory, with the energy density of the nongravitational fields confined to some p-dimensional subspace of the 9 space dimensions in the theory.

A special class of p-branes in string theory are called D -branes. Roughly speaking, a D -brane is a p-brane where the ends of open strings are localized on the brane. A D -brane is like a collective excitation of strings. All these objects took a long time to be discovered in string theory, because they are buried deep in the mathematics of T-duality.

A much energized use of branes has been in providing descriptions for force interactions and emergence at different scales. For example, in a solution with electric charge, if the energy density in the electromagnetic field was distributed along a line in spacetime, this one-dimensional line would be considered a p-brane with p=1. A two-dimensionall interaction would encompass p=2 branes.

Most all of this is now subsumed under what is called "M-Theory". Technically speaking, M theory is is the unknown eleven-dimensional theory whose low energy limit is the supergravity th-eory in eleven dimensions briefly noted above. However, many people have taken to also using M theory to label the unknown theory believed to be the fundamental theory from which the known superstring theories emerge as special limits.

In M -theory, there are also extended objects, but they are called M -branes rather than D -branes. One class of the M -branes in this theory has two space dimensions, and this is called an M2 -brane. Despite this, we still often opt to use D-branes. Why? Mainly practicality! D-branes provide a link between algebraic and differential geometry which is quite natural. Any device or mathematical agent which can provide such a link will be invoked, because of the levels of difficulty in these two mathematical areas.

Now, in the cosmic case we can focus on the diagram shown which shows a simplified 4-step process in the origin of the cosmos based via colliding D-branes. One of these is identical with our own known universe and is designated (A) and another 'shadow' brane exists in close proximity. The proximate brane, as Hawking has noted (op. cit.,p. 183) prevents gravity from spreading too far into extra space dimensions. (He also notes that experiments so far haven't detected branes separated by less than a few mm. )

Now, in phase (2) the two branes are pulled closer by an interbrane force and develop tiny quantized "wrinkles" (which can be thought of as the rudimentary 'seeds' of future galaxies). In phase (3) the branes are actually undergoing a collision and the graphic depicted is meant to show a two-dimensional portrayal of a multi-dimensional encounter. In this collision, an enormous amount of energy is released which is interpreted as 'the Big Bang'.

By phase (4) the branes have separated and stretch and smooth out as they do so (note - galaxies or what will become such, are shown in the image). Also, the cosmos will be seen to be expanding as we see it today. Eventually, of course, the two branes are pulled back again and another collision is induced, and so another Big Bang. This is why the model based upon these interacting branes is called a "cyclic" or "Big Bounce" model. Further, in this model, the universe not only existed before the Big Bang (as a 'known universe brane') but retains the memory of what went before.

More to the point, if brane dynamics governs the recycling of Big Bangs, then it may not even matter what the cosmic density itself is in our own universe - say attaining a density such that all the matter re-collapses (unlikely given the universe's expansion seems to be accelerating). But if the action of a shadow brane is ultimately responsible for recycling the issue is essentially moot or out of our knowledge domain, in terms of definitely knowing that the universe will re-collapse or not!

Thus, even if our own cosmic energy density, rho < rho(c), the critical density needed for re-collapse, the interaction of a nearby "shadow" brane in an inter-brane collision may still provide it!
Posted by Copernicus at 12:07 PM