Why The Wall Street Protestors Are Under Attack 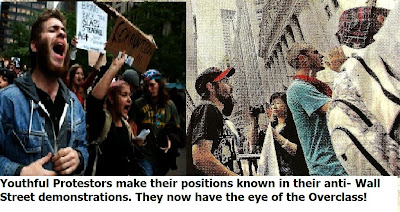 It is an interesting phenomenon in this corrupted, financialized and inequitable society, that whenever protests (no matter how small or seemingly insignificant) strike close to a critical nerve, the powers-that-be (and their hired mind managers) erupt with all the fury and indignation of stuck pigs. Why not? The protests are exposing a creaking, hijacked nation's underbelly by calling attention to the very issues of class and political subjugation I had highlighted in previous blogs, eg.


In addition, the fact most of these Wall Street "occupiers" (what nerve of the corporo-media to call them that, when Wall Street's sharks occupy every powerful niche in this country) are young people (teens and 20s) terrifies the Overclass because they know how the young can make anything - even a demonstrator getting pepper -sprayed by a brainwashed cop- go viral in ten seconds. Thus, though only 300 young protestors may be present, the Puppet Masters know and fear the fact they can get to 30 million in two heartbeats, via Youtube, etc.

But let's look instead at who some of the antagonists are, because by knowing who they are and what their complaints are, one is able to expose the subtext at work and how effective the protests have been.

First, we have the FOX-o-Sphere, but I simply put them under "the usual suspects". We know that they are dedicated to permanent Repuke rule and the Repukes are dedicated to Big Business, and low wage labor, making the first U.S. fascist Christian corporatocracy a reality - if they can - by next autumn. (Which is why we must ensure Obama gets re-elected as the last bulwark against these misfits and miscreants).

Second, we have the Neo-liberal Media Empire, embodied by the WaPo and The New York Times. Now, many of our citizens are brainwashed to believe these are "liberal" bastions, but they are wrong. Once more citizens have had their accurate perceptions thwarted by having a false consciousness (of the media) implanted (likely by the Fox-o-sphere).

The Neo-liberal, to recall the definition from previous blogs, is an embracer and idolater of the "free market" - but since there no longer exists any such thing, only a coercive market, they are ultimately PR-sters, and liars. They want people to believe the markets are free, but obviously they can't be if the markets are gamed and controlled by only a very few elite mega-multinationals, such as Oil, Big PhrMA and Telecommunications. Worse, they demand governments withdraw all basic securities from their citizens, lest the markets become "coerced" or "statist". How daft is that when the markets are already tainted more than listeria-filled canteloupes!

Wall Street Occupiers, Protesting Till Whenever

In other words, they don't like that the protests have no designated expiry date. It drives them nuts.

Another givaway on the source:

"The hodgepodge Lower Manhattan encampment known as Occupy Wall Street has no appointed leaders, no expiration date for its rabble-rousing stay and still-evolving goals and demands

Yet its two weeks of noisy occupation has lured a sturdily faithful and fervent constituency willing to express discontentment with what they feel is an inequitable financial system until, well, whenever"


Note again, the use of language! Language, I repeat, is all important, because it forges thought. In effect, we see in the above language the subtle and not so subtle hands of mental manipulators. In his book America Besieged, Michael Parenti devotes an entire chapter to 'Media Manipulation' and framing heads the list. The role of all framing is to debauch or destroy all open-minded interpretations of the events, and slant them in a particular way.

In this case, we have the protestors demeaned as a "hodge podge" and their stay repudiated as "rabble rousing" - signalling anarchy, roguishness, lawlessneess and no acknowledgement of hierarchy or authority. This is reinforced with the use of "no appointed leaders", insinuating that if no one is leading it can't be taken seriously. This also introduces the subtext that someone has to be there babysitting or "minding" these young 'uns, lest they do reckless things, say like the girls removing their tops for attention.

Thus, the framing plays exactly into the model the Overclass demands.

Then we come to the reference to "two weeks of noisy occupation" implying nothing substantive has been accomplished, only a lot of hullaballoo and noise. This in turn insinuates that all the protestors are doing is wasting time. They ought to be at work, or at least searching for work, like good little Yankee Doodle, American Pie Do-Bees.

Then we arrive at the choice one:

Note carefully, the NY Times mind manipulators and framers don't in any way justify or validate the protestors' beliefs or perceptions. They do not say "an inequitable financial system" which I've shown multiple times, e.g.


but The NY TIMES smarmy Bull shit artists and framers instead assert:

"what they feel is an inequitable financial system"


So the question emerges, why is the Times protecting this corrupt financial system? One can understand the Wall Street Journal doing it, but not the Times? Well, because they protect the Overclass and its interests, for the same reason why - for years- under the Sulzbergers' ownership they dissed and pissed on anyone who would remotely intimate that Lee Harvey Oswald - a poor workingman - could not have assassinated JFK. And why present this media shield? Because it served the Overclass mandate for order! After all, we couldn't have anyone thinking the U.S. was like Italy where P2 conspiracies and assassinations (such as of Lucio Gelli) are the rule. Oh no, one man and one only as the perp! Brand that into brains!

Then again, as Kathryn Olmstead (Challenging the Secret Government: The Post-Watergate Investigations of the CIA and FBI, 1996) observed, p.21:

"According to the Church committee's final report, approximately fifty U.S. Journalists had covert relationships with the CIA, about half of which involved money. Watergate investigative reporter Carl Bernstein charged that the total number of U.S. journalists who worked for the CIA was actually much higher.

So, even from the 60s The Times wasn't the paragon of liberal truth many believed!

Yet another implied putdown revolves around the assumed incoherence of the protestors' politics, e.g.:

"Their politics zigzag wildly. An unemployed schoolteacher calls herself a fierce independent, while an employed teacher is a conservative. An anarchist photographer wants libertarianism to be reclaimed by the left. "

But in fact, the corruption of Wall Street should arouse everyone across the spectrum. Even Tea Baggers!

Now, much more difficult to fathom is why any progressives or Democrats would inveigh against the protestors. But as a recent piece in salon.com pointed out:

"A signifiicant aspect of this progressive disdain is grounded in the belief that the only valid form of political activism is support for Democratic Party candidates, and a corresponding desire to undermine anything that distracts from that goal. "

Which, of course, is horse shit, and also plays right into the hands of those - like Paul Ryan and Rick Perry- who want to make this country much more unbearable and unliveable. It cedes precious strategic ground to them by saying "we can't find for the working man - only try to get our guys elected". But part of the problem, you dumb fucks, is that our guys are also in the corporatists' pockets! So until that link is exposed we're all screwed!

As for the Dem Party, alas it itself has been corrupted by the Neo-liberal meme and mindset. Nearly all the Dems' Senators - with the exception of Bernie Sanders (who is actually an Independent Socialist who only caucuses with the Ds), believe in the free market offal. In fact, the second-ranking Senate Democrat went so far as to acknowledge --when Democrats controlled the Congress - that the owners of Congress are bankers. There are individuals who impressively rail against the crony capitalism!

Some perspective on this is also provided by Robert McChesney in his excellent book, The Problem of the Media,Monthly Review Press, 2004, p. 49:

"With the election of Ronald Reagan, the neoliberal movement had commenced. Neoliberal ideology became hegemonic not only among Republicans but also in the Democratic Party of Bill Clinton, Al Gore, and Joseph Liebermann. Differences remained on timing and specifics, but on core issues both parties agreed that business was the rightful ruler over society.

It was a return to the 1920s - if not the Gilded Age of the late nineteenth century. Few industries seized the neoliberal high ground as firmly as the media and communications industries."

So obviously, the Dem party has been co-opted as well as the Repukes, as part of the entrenched Corporatocracy. The choice in major elections then, isn't for purity and goodness over "evil", but rather opting to endure dysentery over cholera. If Dems don't appreciate that portrayal, too fucking bad, then stop acting like bought and sold capitalist whores for Maul Street!

As for the young (and older) protestors, they need to be aware that the longer they boldly remain out there, the more danger they put themselves in. They already have seized the eyes and ears of the Overclass and now they are beginning to engage their dread. (Which will be clearly gauged be police interventions, pepper-spraying etc.) The financial elites and their political servants are well aware that exploding wealth inequality, pervasive economic anxiety, and increasing hostility toward institutions of authority (and corresponding realization that voting fixes very little of this) are likely to bring London-style unrest and worse to American soil.

On Keith Olbermann's show last week, with Michael Moore appearing, both predicted that merely one match would set off the whole tinderbox. Rather than fix the system and make it equitable and thereby avert this, the Overclass and its elite- militarist lackeys will attack with full fury. They are bound by corporate money to protect that class that supports them and their hangers-on.

In the end, they fear and dread true economic equality because that would portend true democracy instead of Corporatocracy, false consciousness and slavery. This the fascists can't allow!
Posted by Copernicus at 9:38 AM