Why Peggy Noonan is a Nitwit 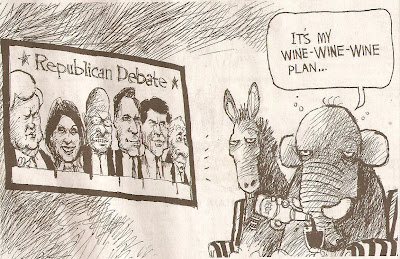 As I've blogged before, it is always a bad sign for a country when irrationality, ignorance and truculence are hyped and extolled, while rationality, sense and moderation are rejected. Such has been the case with the Republican debates, which have become an exercise in extreme theater...or maybe better...horror. At least two debates already have seen bloodthirsty people in the audience cheer on for either: a) earlier deaths for those without health insurance who have serious illnesses, instead of the government having to pay for their care, and b) loud boos at a serviceman who admitted he was gay, the general tenor reflecting the audience disposition that he just leave already.

One may well scratch his or her head when considering such reactions, but not when one sees the radical GOP standard bearers. One a fast-food tycoon who never heard of "neo-conservatism", doesn't care two anchovies where Uzbekhistan is, and proposes 5 thousand volt electric fences to electrocute illegal aliens. Another is a cowboy clown from Texas, who several months ago threatened the Fed chairman if he ever set foot in Texas, doesn't accept global warming - though his state has now lost over 4 million acres burnt up from record high temperatures and drought, and wants to kill Social Security, never mind the 43 million Americans who depend on it.

Then there is a Mormon, who appears the sanest of the top lot, but once he opens his mouth you have to wonder, since he proposes doubling the defense budget beyond its current 58 cents of every GDP dollar.

Meanwhile, totally excluded is the only rational candidate of the bunch, a guy who accepts the data on global warming, and a former governor and ambassador whose only defect is that he refuses to play to the insane Gooper peanut gallery. Jon Huntsman, then, in a normal political milieu, would be the most qualified and formidable GOP candidate on the stage. But where was he in the last debate? Sitting it out in New Hampshire since he'd likely not have been invited in any case- polling numbers too low and all. The red meat Goopers of the Elephant party want only red meat (read: insane) candidates.

And who is sitting at the front of the media peanut gallery cheering these wackos on? Why none other than WSJ columnist Peggy Noonan ('The GOP Wins By Bruising', Oct. 22, p. A17). Miss Noonan is cheering on the candidates, such as they are, for their "bullying" ways, "genuineness" and willingness to take on tough issues. She assures us that the constant bickering and aggressive jousting "makes them look like the alive party". Meanwhile, the cool, rational demeanor of Obama is derided as somehow "dead" or non-viable!

Oh, and let's not forget the Goopers' "jobs plan"! Which is....catch this... to deregulate the Environmental Protection Agency (EPA) and weaken protections for clean air and non-contaminated food in order to create more jobs! In other words, their solution to the jobs dilemma is to make more people SICK! Question Goopers: How is it that you expects millions more very sick people suffering from asthma or tomaine can be employed?

Instead of admitting that a greener industrial base is exactly what's needed for more jobs, the Reeps want to take us back to the fell time before the Clean Air Act was passed in 1972.

And all this Miss Peggy cheers on! Further, she's misled by TV polling numbers into thinking these fiascoes are some kind of "hit" She alludes to the 5-6 million viewers for each debate, most of whom are "politically engaged". Maybe, but don't mistake that engagement or viewing for supporting the GOP, Pegs. In many instances it's purely a case of sizing these goobers up and voters seeing that under no conditions will they pull a lever for any of these clowns! Not for the Pizza man that wants to fry illegal immigrants, or the Texas cowboy rodeo clown that promises to destroy Social Security for being a "Ponzi Scheme "(never mind as The Economist noted in a recent piece, it's nothing of the sort!)

Oh, and then there were Noonan's remarks to do with Occupy Wall Street. In the same piece, she writes:

"The tea party was a middle class uprising that was only too happy to funnel its energy into the democratic process. They took their central concerns: taxes and regulation- and followed the prescription of Joe Hill: Don't mourn, organize. They did!"

Well, hardly! First off, they themselves didn't "organize", they allowed themselves to BE organized by the billionaire Koch brothers and their proxy group, 'Americans for Prosperity'. But I don't call being useful idiots and parrots for billionaires funneling one's own energy or putting it into the "democratic process".

Indeed, in the Tea Party's "democratic process" (or what they considered as such) what I beheld were dozens of images and placards bearing President Obama’s face with a Hitler mustache or swastikas, all the while shouting nonsense like:

“extremism in defense of liberty is no vice”.

The latter ripped from Barry Goldwater, who made it popular in his run up to the 1964 campaign.

Meanwhile, the corporo-media, which currently seeks to depict Occupy Wall Street as decadent, toke puffing hippies or "anti-Semites" was mum as as the Tea Bagger outrages reached fever pitch, including cutting democratic candidates' gas lines (in VA), and tossing bricks through legislators’ windows. Not once did anyone see any in depth reporting on any of these transgressions, as the 2010 elections approached. Nor did they say much regarding GOP candidates placing rifle sights over key Democratic districts.

Later, the corporate media switched into false equivalence mode and framing or claiming “the incivility is on both sides”, as it dredged up incidents of past "leftist abuse" and attempted to place both right extremists and its concocted left extremists on the same spectrum of misbehavior.

I suspected, and Salon.com confirmed in its lead story for March 26, 2010 (‘Eric Cantor’s Phony Victim Story’), that it was all a ruse designed to distract from the ongoing right wing violence and portray conservatives and the GOP as much victims as the Democrats, which was palpable nonsense.

Noonan's portrayal of the Tea Party as "middle class' is also off. Most are not even college educated, contrary to rumors put out by propagandists, and many are racist in outlook. In a special issue of the Southern Poverty Law Center’s Intelligence Report [1], , the extent of right wing hate groups throughout the country (mainly traced to the Tea Party) was firmly documented including their locations by code (for Patriot Groups, White Nationalist, Ku Klux Klan, neo-Confederate-Secessionist, Racist-Skinhead, Neo-Nazi and Christian Identity). A total of 932 hate groups – all on the Right, documented by the SPLC staff. As SPLC advisor Chip Berlet was quoted in the article:

"We are in the midst of one of the most significant right-wing populist rebellions in United States history. We see around us a series of overlapping social and political movements populated by people [who are] angry, resentful, and full of anxiety. They are raging against the machinery of the federal bureaucracy and liberal government programs and policies including health care, reform of immigration and labor laws, abortion, and gay marriage".

These documented links also confirmed for many of us the reasons so many Tea Baggers arrived at Obama health law meetings with weapons, as well as signs of Obama with Hitler mustaches, swastikas and in racist -blackface. It exposed the Tea Party as hard core racists unwilling to accept the legitimacy of the nation's first black president!

Yet, Peggy Noonan praises these misfits as showing or manifesting the "democratic process". She is a nitwit!

But in none of this blather does she give a hint of why OWS has approached the political system in this way! The reason, as I noted before, is because the system itself is in the maw of Wall Street. Its blood monies run like a toxic stream of effluent from its power purveyors on Wall St. to the Capitol of Washington D.C., buying political loyalities via bribery and campaign donations. In this sense, the system itself has been occupied by the rats of Wall Street, and they've constructed a revolving door between their investment banks, and hedge fund operations, etc. and the D.C. Beltway's corridors of power.

OWS, in effect, recognizes this malignantly toxic system and also knows that to upend it would require vast sums of money to fight it on its own turf, which they lack! Hence, the only rational response is to protest outside its toxic walls, though the final prescription for overtaking it has been given in the 1996 book by Charles Reich: Opposing the System, and Arianna Huffington's 'How To Overthrow the Government' (2000). (Note: her method is NOT violent overthrow!)

The Tea Party, meanwhile, opted at the behest of its billionaire backers to become part of the toxic system, specifically ONE party - the GOP- in order to pervert it to such a radical rightward stance that all moderates (like Jon Huntsman) would soon find themselves isolated and without a home or affiliation.

As Huntsman himself has said, in regard to this Tea-Bagger tilted toxic political axis:

"It's a new world. You throw out anyone with any connection to real world experience and government.'

Alas, that way a massive failed state and banana republic lies. So....why would any sensible group or movement join hands to consolidate efforts with the wackos already pushing for such a failed state? That would be national suicide! Far better to militate from without, seek first to alter public consciousness, and at the very least, incite the voting public to toss the cancerous Tea Baggers out of power in the next election to take the country back! (At least part of it)

Once that is accomplished, we can set to work excising the corporate cancer that permeates our land and system.

A pity Peggy is too damned dumb to see this, instead of cheerleading for brutes, bullies and nincompoops.
Posted by Copernicus at 10:54 AM