Thoughts on Winners and Losers.... 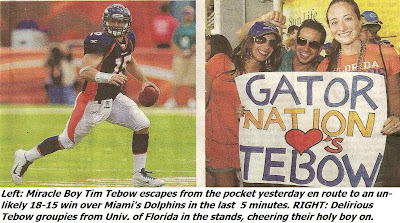 Tony Sparano- below- Miami Dolphins head coach, downcast after the 18-15 loss which may well cost him his job. 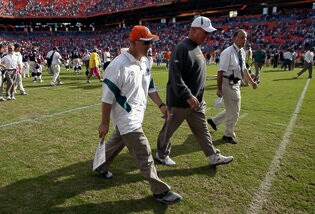 Two teams, two tales: one of winning and going to 7-0 in their record, the other of losing, and now 0-6. The Green Bay Packers and Miami Dolphins! Both teams faced determined opponents yesterday afternoon, the Packers against division rivals Minnesota at their stadium, and the Miami Dolphins taking on the Tim Tebow (he of the John 3:16 balderdash) in theirs.

In the case of the Miami Dolphins, one need only go to the famous Sun Tzu saying which also applies to the pro football arena:

"Wars are usually won or lost before they even begin"

The Dolphins lost their war after holding off Saint Tebow and his Broncos for 54:23 by giving in to the expedient way. The philosophy of "Just play not to lose!" Trouble is, when you play not to lose, you generally do because the thought or possibility of loss has already embedded itself in your consciousness. I mean why else play not to lose? On the other hand, by playing to win, you will generally ensure a win, all other things being equal.

So, with 5:37 left in the game at that point, the Dolphins' Offensive Brain Trust , in what turned out to be a key possession, chose to try to run the ball three times for all of 6 yards. Generally, running can be good at the end of a game, but ONLY if it's effective and: a) takes time off the clock and b) gets first downs. The Dolphins' efforts garnered neither, despite the fact had they at least applied some aggression via the passing game, and got to the 30 yard line, they could have sealed their win with a field goal. In that case, nothing Denver or Tebow did would have mattered.

They also would have done their Defense a favor, which until then had kept Tebow contained, going only 6-for 21, and mounted a serious pass rush - missing from their past 5 games.

But by going three and out, and using up only 4 seconds, they gave Denver new life, as well as their biblical star boy. Taking on the challenge, Tebow drove the Broncs down to score a relatively easy 6 points, then they tacked on 1 more to make it 15-7. There was now about 3:41 left. The Broncos then opted to try an onside kick, instead of punting and turning the ball back to Miami.

Generally, an onside kick must be displaced at least ten (forward) yards of the field to be valid. If recovered by the team that attempts it, it can turn a game around, as we beheld in the SuperBowl two years ago, when New Orleans' Saints did it to the Indianapolis Colts starting the 2nd half.

The defending team must put what is called their best "hands guy" on the receiving team, and that often means the guy with the literal largest hands - to ensure no mistakes. The Green Bay Packers, for example, generally use receiver Donald Driver for onside kick duties. He also has the largest hands on the team - at nearly 11" long.

The Dolphins didn't use such a hands guy but rather an ordinary special teams player, Marlon Moore, and so the result was predictable: Virgil Green of Denver knocked the ball loose from Moore's hands and the Broncos recovered it near the Miami 34 yard line and Tebow easily drove them down that short field for another score. It was now 15 -13.

Tebow and the Broncos now decided to go for two points, which would tie the score at 15 all. This meant getting the ball into the end zone once more. (The Dolphins already tried to do this in the 2nd quarter when the score was 12-0 Miami, but it wasn't needed. Indeed, the failure to convert, minus just the ordinary extra point, also ensured their defeat later).

Everyone in the stadium knew Mr. Bible puncher's M.O. and that meant running it up the gut into the end zone. Did the Dolphins? Evidently not! Tebow just waltzed 4 yards into the end zone like he was taking a Sunday stroll.. It was now 15-15. All was not yet lost. The game went to overtime.

Miami won the coin toss, so got first possession - but they muffed it and went 3 and out. The Broncos then got the ball and they also went 3 and out. Miami took the next punt and.....boffed it...fumbled with the Broncos recovering near the Miami 30. Game over! The Broncos' Matt Prater kicks the winning field goal and Tebow and the Broncos prevail 18-15.

Dolphins' fans are ready to hang themselves from the stadium rafters in the wake of the club's biggest choke in its 46-year history. Meanwhile, Tebow groupies - mainly from Univ. of Florida - are beside themselves with biblically proportioned delirium over their boy's heroics. One religiously-inclined fool reporter asks Tim after the game:

Wonder what the goop will ask next week after the Lions of Detroit get done mauling Xtian star boy!

Now, flash to the Packers, at the end of their game with the Minnesotar Vikings -who have now scored 23 unanswered points and are within a touchdown and extra point of winning. The score if Pack 33 Vikes 27.

The Minnesota coach, facing 4th and 10 chose to let his D hold the Pack, which had meekly gone three and out twice before, and punted. With 2:41 left it was essential to retain ball control and not kick the ball back!

The Pack knew in order to beat this new kid on the block QB they faced, Christian Ponder (now emulating Dan Marino) they had to get runs AND 1st downs!

James Starks rose to the occasion running for 16 yds. in one go, and then nailing 2 more first downs by the end of which only :37 was left on the clock and it was fall down time.

They took care of the ball possession at the end and business, and why they are 7-0.

The Dolphins didn't, and that's one major reason they're 0-6.
Posted by Copernicus at 8:28 AM