Yes, the Cougars Are Moving In! 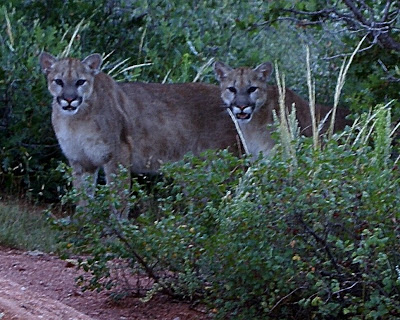 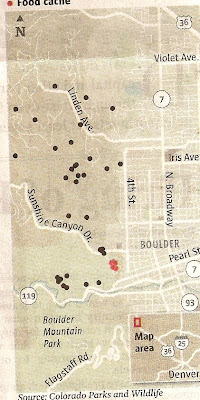 Not that type - the middle -aged female human variety on the lookout for young studs. I'm talking about the large, 180- 200-lb felines that are among the last large predators roaming the West. Here in Colorado, an estimated 3,500 remain, most of them tracked using GPS devices. But what has state Wildlife people now on alert is how the GPS tracking shows the big cats have been at literally hundreds of locations near neighborhoods on the Front Range (embodying the line of towns and cities to the east of the Rockies, from Denver, to Aurora to Castle Rock and Colorado Springs.

These findings are worrisome, not least because it means the probability for an untoward encounter between hungry cougars and humans is rapidly increasing. Are the cougars to blame? Hardly, when you consider their habitat has basically been taken from them in the over building craze here in the West.

But what has drawn special interest from state Wildlife folks is one particular cat, dubbed "AF69" after her tracking identity. GPS trackings of AF69 shows not only multiple forays into Boulder neighborhoods, but also food storage caches (see map, and red colored dots) which we'd prefer no human interlopers accidentally encounter.

Let's understand also that (for those who've never been there) Boulder is not some isolated mountain village but a bustling little town of some 100,000 and the home of the University of Colorado's main campus. It's where I've visited a number of times, mainly to attend scientific conferences - for example at the Millennium Harvest Hotel in 2009 (solar physics conference), and earlier at the St. Julien Hotel (Dynamical astronomy division conference).

Pearl St., shown on the map, is a main drag for the college kids and visitors in general, featuring outdoor bistros, boutiques, pizza parlors, steak houses, book stores and venues for outdoor musicians to perform. Hence, the fact a large predator could just amble within a block of one end of it is disconcerting to say the least. More disturbing was how the cat dubbed AF69 recently cached a deer carcass in a suburban carport under a Chevy Blazer.

What if the homeowner had arrived at the wrong time to get into his Blazer? It might not have been too pretty a sight. (Recalling how one large cougar in the outer LA area a few years ago, dragged off a female jogger and left her body half eaten).

How do Wildlife officials handle these incursions? Well, mainly they rely on a technique called "hazing" which involves dousing cats with pepper spray if they get too close for comfort. In more extreme cases, they make use of rubber buckshot or set off small explosives. The idea is to send a message to the cat to not get too comfy in this human territory.

Alas, sometimes it doesn't work, and the cats are too committed to their new digs (since there usually is food available) to leave them and risk starving. So, it's not surprising that 48 cougars have been put down over the past decade, according to data from the Parks and Wildlife Commission. The data also show 37 killed between 2006 and 2010 or more than triple the number downed in the previous 5-year period.

Meanwhile, in Boulder, 2 of 6 cougars tracked appeared to have been spending more than 1/6 their time in and around neighborhoods. Not surprisingly, they were both killed outright rather than risk attacks on humans. Another two that encroached on Boulder city limits were "darted" then transported over 100 miles away.

Sadly, no one expects the number of these magnificent wild cats put down to decrease, not with more and more people moving here to Colorado every month. This means more home building, more claiming of cougar habitat, and hence, inevitably more run-ins with cougars or more efforts to haze and even kill them.

Still, the increasing thrust of wildlife officials is to ensure the cougars have at least some rights too. After all, they were here first. As Steve Yamashita, regional director for Colorado's Division of Parks and Wildlife recently put it:

"We continue to get incidents where people are confronted by animals, but typically there is no threat involved."

The implication is there is no need to kill every lion which finds itself in a human encounter. As Yamashita adds:

"We're trying to tell people how they can live with these predators".

So peaceful (but wary) co-existence, takes priority over just wantonly slaughtering them.

I totally agree. And the fact is, the only real casualities in the state over the past few years have been small dogs (mainly Yorkies, some poodles) that careless homeowners left outside over night for one reason or other. In the end, they were merely providing 'cat food' for the cougars.

Once humans take proper precautions there's no reason to exterminate these wonderful creatures, or ....move them to more sparsely populated states.

Let's hope our increasing human population gets it!
Posted by Copernicus at 2:43 PM