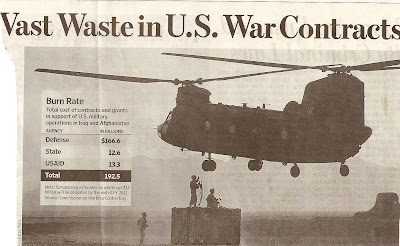 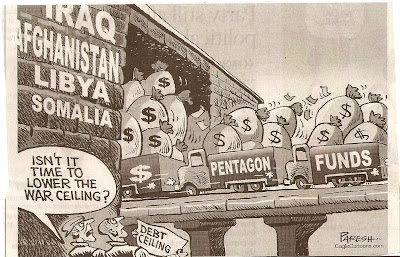 "Why of course the people don’t want war...But after all it is the leaders of the country who determine the policy, and it’s always a simple matter to drag the people along, whether it is a democracy or a fascist dictatorship ... Voice or no voice, the people can always be brought to the bidding of the leaders. That is easy. All you have to do is tell them they’re being attacked, and denounce the pacifists for lack of patriotism and exposing the country to danger.” - Hermann Goering, Nuremberg, 1946

A headline on p. 7A of today's Denver Post blared:

The article was based on recently released Pew Research Center findings which uncovered as dangerous a divide between the civilian population and military forces, as between the wealthiest Americans and the lower 95% (400 billionaires control more wealth than the 150 million lowest two quntiles of the populace).

According to the Pew study, 84% of veterans of the Iraq and Afghan campaigns (total of 712,000 having served in all) believe the non-militarized population has no understanding of the problems faced by the military. Indeed, 71% of the civvie populace shares that assessment. The study traces part of the reason to the fact that less than 1 percent of the U.S. population has been on active military duty at any time during the past decade. In fact, the study noted that for most Americans the occupations in Iraq and Afghanistan have been seen only in glimpses - in newspapers or briefly on TV.

But let's back up a bit and assess whose fault all this is...really! First off, the 1 % of the population serving is no mystery because today's warriors operate as a volunteer force. This is radically different from the 1960s, 70s when the draft called young men from all walks of life. Many studies conducted since the military ditched the draft show the main reason for joining is not patriotic but rather economic. Young people leaving high school thus see the military as the only escape to a better future. And make no mistake, all the recruiters hype the benefits but downplay the hazards ....such as possibly finding oneself under attack in a Taliban- held post near the Pakistan border.

My point here is that, like it or not, the military context is different today and there still remains a choice on whether one partakes of military service or not. In the 60s there was no such choice, unless one failed a draft physical as I did (in March, 1965) and was classified "I-Y". Or, one could at least put it off via a college deferment.

As for the non-interest or only casual interest in what the warriors are up to, this also is no mystery.

First, the nation - after 9/11- asked or demanded no sacrifice from the civilian population. People were actually advised (by Bush Jr.) to go out to the Malls and shop. Worse, despite getting involved in Afghanistan and Iraq (the latter actually with no good rhyme or reason other than Bush wanting to get revenge on Saddam for threats to Daddy Bush), at costs now approaching $2 trillion (including projected medical expenses) no demand was made for any higher taxes! Naturally, the civilian population would then conclude neither the Afghan or Iraqi operations were serious if no one was required to pay for them from tax dollars.

By contrast, not one person complained about heavy new taxes during the four years of the U.S. fighting in the Pacific theater, or in Europe during World War Two, or about the drastic fuel and food rationing. Those moves immediately convinced the WHOLE population they were in it together, no exceptions!

Nor did people bitch in the immediate post-war period when the high taxes helped to finance the Marshall Plan - to help pay for the reconstruction of Europe. People were smart enough then to grasp that Europe's stability meant their own - and if they paid NOW (in higher taxes) they would be less likely to pay later in another war.

Indeed, many of those post-war taxes were still in place when the Korean War broke out in 1950. Despite ALREADY high taxes, congress passed new taxes in 1950 and 1951 to pay for the costs of the conflict. They had enough sense to know, unlike the useless miscreant tea baggers today, that if you engage in military actions - especially prolonged- they HAVE to be paid for! You can't keep signing a national credit card and expecting future generations to pay the debt!

Secondly, the real wars fought over those times were brought home to people every night via radio or in theaters via Newsreels. You could not, in any year from 1942- 45, venture into a movie theater and not first see war images from the WWII battlefields in Newsreels of the day. They were always shown before the feature film.

During VietNam, meanwhile, immediate battle images - such as from the battle for Khe Sanh and the Tet Offensive, came into the living room every night - including graphic images of the wounds, and the personal costs. In addition, the military funerals were not shrouded from view as they are now, but shown nearly every night, including the bodies in caskets being offloaded from transports.

So WHO'S fault if there's a lack of public interest, based on only "glimpses" seen on TV or in the papers?

Well, the Pentagon's! They decided after VietNam that they would control all the images - including of the battles, carnage and funerals-caskets- body bags, because they believed in their heart of hearts those images undermined the war effort and stoked the anti-war protests at home.

Quite possibly they were absolutely correct. However, the "war" supporters can't piss and moan now about public disinterest if those images are deliberately concealed and managed like PR material, to try and avoid negative perceptions. You can't have your cake and eat it. You can't have public involvement and caring but at the same time censor the very imagery that would make them care!

The interesting thing from the same Pew Study, is that nearly one third of the vets themselves now consider that the Afghan and Iraq conflicts were "not worth fighting over". They also agree that - after ten years of wasting blood and treasure - the nation is better off focusing less on foreign involvements and more on this country's own affairs, domestic needs. (According to the same opinion survey released Wednesday).

These findings absolutely pose a dilemma for the Obama administration and congress if they seek to further gut domestic programs - including Medicare, food stamps, home heating subsidies, etc. - in order to further extend the Iraq and Afghanistan occupations while adding to the military fat.

People, indeed, are no more likely to tolerate such a situation than they are now willing to tolerate more perks for the rich and Wall Street while the majority face destitution. Hence, the "Occupy Wall Street" theme and march, may well turn into "Occupy the Pentagon" next if military spending isn't pared back, or at least forced to adhere to "payGo" like other budget areas.

As for the Pew's citation of "isolationist tendencies" in the post 9/11 veterans who indicated the country ought to focus on problems at home - no, this is a misinterpretation.

It isn't a case of "isolationism" at all but rather enhancing genuine domestic security. If one's infrastructure is falling apart, and one third of its population are liable to massive biological infections, flus or whatever, and can't access medical care, then that is a national domestic emergency. It also trumps spending on nation-building in faraway lands that secures no benfits at all for the majority of Americans now facing home foreclosures or prolonged unemployment.

The fact is ten years is enough and we need to cut our losses and do so NOW. No more excuses.

This nation is already at the precipice of backsliding into a third world redoubt where only the wealthiest can survive. We ought to have learned our lesson from the British and Russians, in their own occupations, that Afghanistan is the graveyard of nations. Or at least once relatively stable and prosperous ones.

But evidently, we still haven't done so. Let us hope the signs and portents of this Pew poll-survey wake our leaders the fuck up for once. The first sign of an awakening would be an immediate large slice out of the annual Pentagon budget of at least $300b.
Posted by Copernicus at 9:17 AM