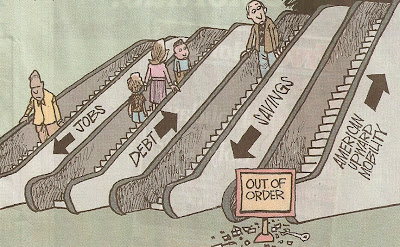 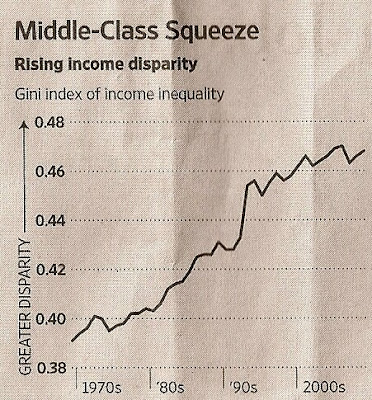 In pouring through issues of The Wall Street Journal the past few months, there are two recurring monster lies that have been circulated most widely. These lies seek to disguise the basis of the current unemployment situation, as well as the instability of the economy. In this way, by preferential framing, the actual culprits are left untouched and unexposed. In the meantime, so long as the actual culprits are concealed from view, the income disparity increases - as the Gini index shows (see graph).

All those tens of thousands of new college graduates, with immense loan burdens, must now face an essentially jobless future so long as Wall Street's liars manage to sell their propaganda to the gullible. These poor kids then, stand to be sent lurching ever further backwards economically unless the truth is told. What is the truth? Two of Wall Street's biggest lies and my rejoinders!

1)The Jobs are there but our young people lack the skills to fill them, so we have a mismatch or gap between jobs and skills

Total, ineffable horse pockey! First off, for what jobs remain in the country (and haven't been sent off to China or India yet) the primary problem is not lack of worker skills, but the refusal of companies to provide training. Thus, we don't have a "skills" problem but an inflexibility problem.

When I took my first job in 1967 as a geologist's assistant for an Oil corporation, I had no training in petroleum geology nor had I even taken a single course in geology. Under today's peddled malarkey, I'd therefore merit being jobless for not possessing the correct and specific skill set. But in truth, the company understood that 99% of all applicants would lack such prerequisites, so had developed a training program where one learned on the fly.

Soon enough, on being delivered geological strata cross sections, one learned to recognize salt domes and other critical areas, and how to apply fiducial or timing marks.

With this job, I was able to establish my independence at age 20, and get my own apartment on Canal St. in New Orleans. Meanwhile, today's debt-slave kids are seeing hell, and 5.9 million between 21 and 34 have had to move back in with their PARENTS! But what else can they do when the jobs that are available (mainly desk clerks, telemarketers and retail) are unable to deliver that independence, far less pay off monstrous college loans?

My point also is that jobs can be organized to be done successfully even if a candidate doesn't have exactly the skills needed. Related to what I noted in my own case, only about 10% of the IT workers in Silicon Valley (during the tech boom of the 90s) actually had IT degrees. Technically, based on today's BS, they were no more qualified to do IT work than I was petroleum geology! But what the IT companies then understood is that while it might be nifty to have an IT Ph.D. checking your network connections, it didn't really require that level of expertise and training could compensate for lack of skills.

But what do we find? American companies are no longer featuring or sponsoring training programs! Even basic apprenticeship programs have largely vanished along with management training programs.

Why? It appears a major reason is that companies feel they can get the expertise they need without training, by setting up shops with lower cost Indian or other labor overseas. This saves them lots of money, but at the cost of having workers for jobs in the U.S. Far better just to call on some Indian techie to get assistance with an American network problem than hire Americans to do it.

Of course, this deplorable situation also explains why so many out of work folks, especially recent college grads, are lining up to do unpaid internships - to acquire the skills they ordinarily would have with company training! But how long can they do that route when their college loan grace period is going to be expiring soon (6 months after graduation).

2) There is too much economic uncertainty which is why so many companies are sitting on cash!

Total, unmitigated codswallop. The true fact, as TIME columnist Rana Foroohar observes ('Uncertainty? Don't be So Sure!', Oct. 31, p. 28) is that:

Indeed, as we saw with the financial crisis of 2008, the most massive fortunes were made by those who exploited the existing uncertainty the most and made the most superbo bets. Those like Goldman Sachs which snared $13 billion in profits by betting on housing failures! How did this uncertain atmosphere come to be?

Start with David X. Li’s (Gaussian copula) formula which not only allowed bad mortgage securities to be sown among good ones, but also provided the effective operational basis for the concatenation and intertwining of relatively innocuous securities (with high bond ratings) to toxic waste in the form of the sub-prime mortgage securities via credit derivatives. (Again, for those who don’t know, derivatives were invented by physicists who had migrated to finance and based their creation on the concept of the mathematical derivative, e.g. dy/dx, such that a fractional incremental variation in one variable (dy) generates a corresponding change in another (dx).)

Thus, Li’s formula provided the facile enabling mechanism and basis to accomplish massive bond rating uncertainty with little oversight because the obscure mathematics was generally not well understood by the investment banks (like Lehman’s) that offered the spuriously blended instruments.

Further massive uncertainty arose from a proximate, immediate source which effectively “spider-webbed” the high risk sub-primes to millions of innocuous financial instruments, including municipal bonds and pension investments via “structured investment vehicles” or SIVs. The uncertainty inhered in not knowing exactly what comprised the SIVs, but for those investment banks that actually had "quants" (former physicists now designing the new derivatives called "credit default swaps" or CDS) they could use the same CDS basis to make bets for failure. Thus, as the SIV market collapsed, the bet makers could collect because of the endemic uncertainty.

The CDS were perfectly tailored to this uncertain atmosphere, because nearly all of them required no formal signing or records - so many were made over the phone, much the same way as a Vegas sports book might take a bet from a gambler.

This lack of knowledge, generating uncertainty, was precisely what allowed and enabled the biggest CDS players to win. Another hedge fund operator (Chris Wolf) quoted in the same article put it:"

“You can guess how Wall Street's cowboys responded to the opportunity to make deals that:

2) require little or no cash upfront and

So, next time you hear, or read either of these mega-lies of Wall Street, be sure to call BOLLOCKS!
Posted by Copernicus at 2:17 PM