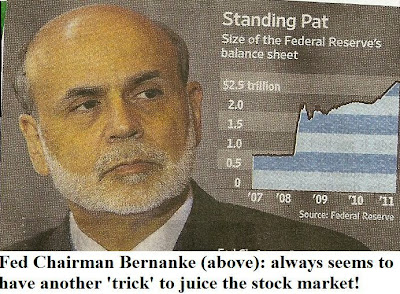 In one particularly memorable scene in the movie Scarface, Cuban refugee scumball Tony Montana - now the top cocaine lord in Miami - is seen lugging over a dozen bags of cash into a Miami bank. He needs to have it all laundered, millions from the cocaine sales. A banker in tailored pinstripe suit arrives on the scene and informs Tony, "Sorry, but we just can't take all this money! You will have to find somewhere else to put it!"

As amazing as it may sound, we are very nearly in this territory now, with banks actually dreading having to accept any more customer deposits! Indeed, as noted in today's lead business page story in The Denver Post (Banks Flush with Cash, p. 5B), some banks such as Mellon Bank of New York, are actually charging small business customers a 0.13% fee for any new deposits.

Meanwhile, some large banks, including Wells Fargo, US Bancorp, and JP Morgan Chase are actually passing along the costs of federal deposit insurance to some of their small business customers (ibid.) Even community banks, generally hailed as pro-little guy, are evincing an attitude that they don't mind if people park their cash someplace else. Hmmmm...maybe the old mattress routine?

"We just don't need it anymore!" according to Don Sturm, owner of American National Banks, quoted in the piece. He then added:

"If you had more money than you know what to do with, would you want more?"

How did we get to this situation? More to the point, why the hell are we in it, with so many people still needing loans, for everything from homes to home renovations, and the banks just sitting on tons of cash instead of lending it?

In many ways you can blame Ben Bernanke and the Federal Reserve. These guys continue to treat the recessionary conditions as if they are standard pro forma fare, as opposed to being in a balance sheet recession. In this type of recession, we need much greater liquidity but that can only be at the behest of more spending, whether of government, citizens or business. The trouble is everyone is locking down their wallets, accounts!

First please note businesses (mainly small ones) and little guys who own 401ks, and are trying to make back stock market losses from 2008, are terrified. The gyrating and unstable stock market has rightly convinced them that Wall Street is exactly the wrong place to park hard earned cash. So they are now socking it away in CDs, money market accounts and plain old vanilla bank accounts..."where it does little to stimulate the economy"...according to the Post article.

But then, see, it isn't the job of little guys - whether businesses or savers - to "stimulate the economy". By any factoring of economies of scale, their first objectives must be to reduce their debt or deleverage and can't expose any more of their money to stock crashes or market corrections. As it is, government studies are showing nearly 5 in 10 Boomers don't have enough money saved to retire, which means they surely can't afford to lose any more.

This is also why so many are saving their money instead of splurging it at retail outfits. A large part of this purse string retrenchment has to do with the whole aggregate demand environment including stagnant wages, cut benefits and higher costs!

Indeed, inflation in food and fuel is soaring, and has been since the commodity indices (see graphs) warned of spikes in key commodities at the start of the year. Now, according to a report in today's WSJ ('Prices Rising for Good or Ill', p. A6) the U.S. Agricultural Dept. "expects food prices to increase 3.5% to 4.5% this year after a 0.8% climb in all of 2010"

This means inflation is REAL and here! Now! It means the Fed has got to stop playing these silly ass games with people's lives and RAISE interest rates! NOW! This game, a con game if ever there was, wherein inflation is only tied to a certain artificial subset of goods, and excludes food, medical costs, and fuel, is plain horse manure and bollocks.

Registering the real inflation now, and that projected, implies the Fed - if it will once and for all concede we're in a balance sheet recession, must increase the interest rate to at least 1% and maybe even 1.5%. This will ensure several things, all good:

1) Banks will be willing to offload via loans some of the billions of cash they have on hand, instead of sitting on it. Right now, because the clueless Federal Reserve has set the floor off which banks price their lending rates so LOW - based on its decision several months ago to lower interest rates to near zero- means the banks earn less money on the deposits they lend. They also earn less on the deposits left over to invest, as well as on loans.

Of the $41.8 billion in deposits Well Fargo collected in the 3rd quarter, for example, only $8.2 billion was used to finance new loans.

If the Fed would get off its keyster and raise the interest rate to 1.0%, this amount could be tripled, almost overnight. That act of lending would then free up assets which now largely sit frozen, and contribute to the frozen economy!

2) An increased interest rate would immediately help savers, who'd be able to sock away more money for their retirements. This would lessen dependence on the government.

3) Increased interest rates on savings would also allow more seniors in the higher quintiles to spend more! Provide them with more disposable income! Rather than penny pinching as they are now, they'd be able to buy a few extra things...clothing, new walking shoes, ipads, ipods, dvds, whatever...and hence contribute to the GDP. This would help the overall aggregate demand. Higher aggregate demand means more jobs!!

The Fed needs to recognize it needs to get this economy flowing again, if jobs are ever to return and businesses - especially small ones - use their money for plant and labor as opposed to parking it in banks.

The solution is clearly to raise interest rates which also, by the way, will have the beneficial effect of more bond buyers taking up the debt load by purchasing U.S. Treasurys.

Whether Bernanke and the Fed actually has the sense to do this remains to be seen. Up to now the only thing they've shown is their detachment from economic practical reality while being wedded to abstract, horse shit economic reality based on the Pareto distribution.
Posted by Copernicus at 9:42 AM