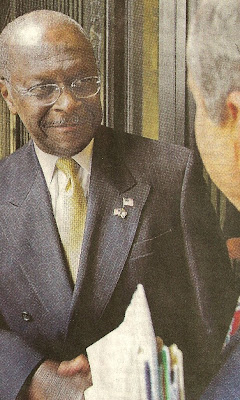 As usual, anytime some pol or candidate shows even a remote hint of any supposed originality or unique idea, the corporo-media press hacks slobber over him like a dog eyeing a freshly seasoned steak ready for the grill. And just like the dog, the hacks' reflexes kick in, albeit not quite Pavlovian.

9% corporate tax rate across the board

9% flat income tax rate for everyone

9% sales tax for everyone.

To entice the hacks and corporo-pundits to calm down, it behooves us to further assess and analyyze Cain's plan. What we find, when we do, is a hare-brained scheme that will convert this country into another Somalia or Liberia in maybe ten years...if that long. Are sane people really THAT eager to inhabit a failed state of 310 million people?

First, the 9% corporate tax rate. This makes no sense since as David Wallachensky and other commentators have shown, the corps are already escaping with some of the lowest tax rates in ages. The effect of lowering them further will then mean that the slack will have to be picked up by average citizens. You can''t after all, entertain a massive loss in national revenues and still expect to be first in much, including defense.

So, assorted groups (e.g. Tax Policy Center) have calculated that if Cain were elected and he actually managed to get congress to bite on this codswallop, the general income tax would have to be raised nearly 5 pct. points in each category!

But wait! Cain also wants a staight 9% flat tax for everyone!

Well, this'll work fine for the hotshot on Wall Street earning 9 million a year who'll still have around $8.2 million after this tax.

But wait again! The guy still has to pay propertty taxes, which across the U.S. average about 6.5% of income, so take away another $1,950. This is something Cain's proposal can't do diddly about.

Then there is the increased sales tax! If our family spends on average $6,000 a year on school supplies, appliances, house materials - paints, etc. then that subtracts another chunk of $540.

Note that this is at a time when incomes of Americans have fallen 7% since 2000 and stand to fall another 7% over the next five years. Which means another chunk subtracted via inflation and wage suppression....by who else? The Big corporations!

In the end, as ABC News economists computed and presented last night, the average family earning $50,000 will have to cough up an additional $2,750 in taxes.

The interesting thing here is that current $20k/yr earners who pay no income tax, because of using the Earned Income Tax credit, will now be paying an extra 9% they wouldn't have before, or $1,800. That's $1,800 they won't have to spend on groceries, rent or mortgage, or school lunches!

As one observer phrased it, quoted in today's story on Americans' falling incomes (WSJ, p. A5), Americans face falling quality of life standards at least through 2021! But this is not factoring in Cain's 9-9-9 idiocy. If THAT were to actually get passed, Americans' standard of living would fall to the level of Costa Rica's within 7 years and below Malawi's in ten. (Already our Gini index, an indicator of inequality, is at the level of the Phillippines and Mexico).

Do so many Americans REALLY want to live at the level of peasants? DO they really want to consolidate the Corporate State to the point we all become serfs on Herman Cain's new corporate plantation? Then why even consider this character as anything other than a clown (who actually said the other day, he's the "real deal" ...like Haagen Dasz "Black Walnut" ice cream, not realizing that brand went out two years ago!)

But the best is saved for last.

In addition, Cain plans to abolish the child credit for families to claim as well as the home mortgage credit. No credits, or loopholes allowed if we have this 9% flat tax!

Further, he plans to abolish the 6.2% payroll tax (which he believes will make up for the loss of the above credits). Trouble is, when you subtract the payroll tax you no longer have any allocations or revenue for Social Security or Medicare. That means, both those programs will plausibly face a very big budget axe within a year or so of Cain's 9-9-9 being enacted.

This means that citizens under his crazy plan, wil have to look forward to taking care of their own retirement funding and not expect anything much from the government. Or expect much from Medicare, other than maybe a voucher for $500 a year!

Cain insists his flat 9% tax will be able to pay for the two programs the payroll tax had funded, but this is bare bollocks. There is no way that could happen unless this country massively pared down its military budget, to no more than about $100b a year, from its current $746b a year. The odds of that happening when so many congress critters are in the paws of the military industrial complex? About the same as a horde of aliens landing on Capitol Hill and hauling away Boehner and Cantor to become their sex slaves on the home planet of Zeta Reticuli III.

The funny thing is that even conservatives, mainly from the business community, have attacked Cain's moronic plan. They argue, correctly I believe, that a 9% sales tax would have the effect of dampening consumer spending in an already depressed sales environment. This is true. When aggregate demand is so low, as it is now, people are just looking for more and more ways to shave their spending. Believe me things will be no better next year or the year after, what with the Repukes' massive austerity program coming. So, if a 9% sales tax is also applied, you will see the return of home made clothes, foods, etc. like you never have before. The GDP - by my estimation- will plummet about 20%. And that's my best estimation!

If you really want to live in a Banana Republic!
Posted by Copernicus at 1:43 PM