The Wrong Solution to Budget Woes! 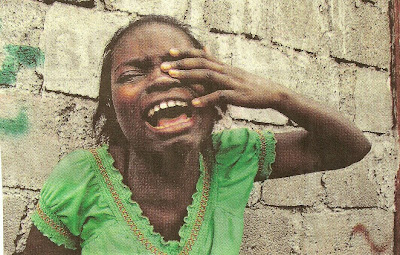 A hungry Haitian child after being given only a baked mud pie to eat. Her plight will increase as will that of another 1.5 million Haitians if the U.S. cuts foreign aid in order to protect its bloated military budget!


As stark misery and humanitarian crises spread across the globe, one would like to believe the planet's most powerful nation would step up to to the challenge. Right now, the proportion of the U.S. budget allocated to foreign aid, inluding health assistance, food, and medicines, is barely 1%. Now, the news is that in the midst of the national austerity hysteria, the country plans to retrench foreign aid spending in order to "save money".

One is led to ask what harebrained morons conceived of this disgusting and inhumane solution to the deficits? Yet the news coming out of the Beltway is that as lawmakers scramble to trim the swelling national debt both the Repuke -controlled House and the Dem-controlled Senate have proposed slashing financing for the State Department and its related aid agencies (which spending accounts for less than 1 cent of every dollar) while ignoring the monstrously bloated military which accounts for 58 cents of every dollar). And this at a time when desperate humanitarian crises, such as still in Haiti (see photo of starving Haitian child) are increasing.

In Haiti, for example, more than 650,000 stll remain homeless after the massive earthquake that stuck almost 2 years ago. Kids there have returned to having to make do with eating warmed mud pies that their beleagured moms "season" with some leftover salt or sugar. Others still contract cholera from the river waters. And what is the U.S. plan of action? To further cut spending there to increase the misery index while the miltary industrial complex grows fat off our taxpayers.

Mewanwhile, in Africa, the cuts will ensure less financial support not only for food stuffs (especially now as famine rages in Somalia and the Sudan) as well as medicine for the continent's millions of AIDs sufferers, and assistance in birth control - to contain Africa's exploding population.

Are the austerity mavens proposing such cuts even remotely aware of the monstrous harm they will inflict, while they allow our arms manufacturers to continue to gorge - even as we now spend more than the next 25 nations combined? Are they aware that it is precisely foreign aid, food and medicines, as well as education (say provided by the Peace Corps) which is the best antidote to terrorism?

And that the tactic of cutting foreign aid is penny -wise and pound foolish, because what will be saved with this cynical move will have to be paid for ten thousand times over in combating new terrorists, including pirates, and othe groups springing up in every place from Somalia, to Sudan, to Yemen to Pakistan?

Before this proposed budget idiocy, the rational of "smart power" had been the norm, by which diplomacy and development had been emphasized over U.S. military power. But now with the reversal of this counterforce for good and decrease in foreign aid, it appears the military will actually have cause to feed off the taxpayer trough - since doubtless there'll be hundreds of brush fire wars and terror strikes accompanying the loss of needed aid. After all, new millions of hungry people will not go quietly into that good night. They will strike back, and furiously.

We now see the first impacts of protecting the over-engorged military from needed spending cuts of the order of $350b a year, and we will see more as the domestic "super committee" sits down to weigh military spending cuts against domestic ones. Let us hope at least some in that committee have the foresight, gumption, principles and power to force the military to cut its over-bloated budgets rather than endorse further cutting from American citizens struggling amidst high unemployment, heavy debt loads, falling home prices and high food and gas prices.

It's long past time to cut the damned military budget and make that the first strike against the Wall Street- fed militarization of capital that infects the planet.
Posted by Copernicus at 8:12 AM