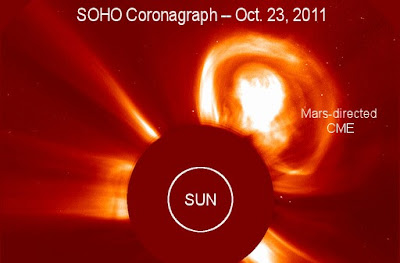 How times have changed in respect to the Sun and what it does! Merely two years ago worries were afoot that the Sun had fallen 'asleep' and we might well be in store for another "Maunder Minimum" - a period of roughly 70 years beginning ca. 1645, which ushered in a little ice age which saw continental Europe with the lowest summertimes temperatures in recorded history, and which adversely affected the crop growing season.

In 2009 such fears of a new little ice age were re-awakened, on account of 286 total spotless days accumulated in 2008, and 128 by the time of the 40th Meeting of the Solar Physics Division, in Boulder, Colo. on June 12. However, as the meeting opened and specific papers were presented, some of the fears abated. For example, Frank Hill in his lecture 'A Helioseismic Comparison of the Solar Minima Preceding Cycles 23 and 24', noted the current cycle (24) was not yet exceptional - certainly in terms of spotless days aggregated. He pointed to 311 spotless days in 1913, and 287 spotless days for 1901. However, he also noted the lowest solar wind pressure since cycle 15, as well as the lowest irradiance in the modern (space observation) era.

But by early 2010, activity had begun to pick up and now we have the Sun firing up not only large solar flares but coronal mass ejections (see e.g. the attached coronograph, from http://www.spaceweather.com/)

The possible variability of the Sun, as well its potential for violent eruptions (in solar flares) makes it a pre-eminent subject of astronomical, and human importance. Indeed, attention to the Sun's behavior extends beyond the domain of esoteric research. Defense agencies and the military, for example, as well as power companies and telecommunications systems, are regular consumers of solar data - specifically flares, but also the particle bursts that result from flares. The data is provided through the 24 hours monitoring of the Space Environment Services Center of the National Oceanic and Atmospheric Administration. This is critical because, if conditions are right, energetic particles can saturate the delicate electronic detectors on board a spy or communications satellite (As occurred with the Telstar 401 in January, 1997).

None of this is mysterious, of course. For years short wave fadeouts known as Dellingers originated with the passage of large sunspot groups with their powerful magnetic fields, near the center of the Sun. Solar flares magnify the effects, especially with electronic detectors on aircraft and in satellites. In some cases, large flares (with high x-ray output) have been known to cause malfunctions in navigation systems aboard commercial aircraft.

More recently, key questions have been asked regarding new solar findings (specifically emissions in ultraviolet or UV bands) and the relation to climate change. Evidently, the amount of UV emitted changes much more than the total amount of energy (irradiance) received. The Earth's stratosphere, that region of the atmosphere that is most absorptive of UV radiation, is thus expected to be especially sensitive to UV changes from solar cycle to cycle.

(The irradiance is just the solar radiance - in watts per square meter per steradian - integrated over the full solar disk."Steradian" denotes a solid angle measure. See, e.g. the definitional details (with diagrams) here:http://en.wikipedia.org/wiki/Steradian)

Needless to say, irradiance has a direct bearing on the issue of climate change and to what degree the Sun is responsible, and especially whether (quantitatively) its irradiance over any one solar cycle or period therein overrides the human-incepted, CO2 -driven, greenhouse effect.

In a paper just published in Nature Geo-Science, Sarah Ineson of the British Meteorological Office, compared the way that the Met Office's improved climate model dealt with winters at times of high UV and low UV. They used data on the amount of UV that the Sun gives off as revealed by the SORCE satellite operated by the University of Colorado, at Boulder. Ineson found that at low UV levels the stratosphere in the tropics was cooler because there was less UV to absorb. This meant the difference in temperature between the tropical stratosphere and the polar stratosphere decreased.

This decrease altered the way the atmosphere circulated and - as the changes spread to the lower atmosphere- this made it easier for cold surface air from the Arctic to come south in winter, freezing chunks of northern Europe. Such conditions look similar to those seen in the past 2 European winters (which occurred during periods of relatively low solar activity as I noted earlier). Meanwhile, the Arctic itself is warmer than usual, as shown in previous blogs - given the degree of ice shelf melting.

Interestingly, this pattern has apparently been observed before, during the prolonged period of solar activity that marked the Maunder Minimum in the 17th and 18th centuries. So what is going on, are we or are we not entering another Little Ice age?

Not! Because recall the data for the severe European winters were taken mainly over the period when Cycle 24 was still dormant (relatively) and the associated solar wind pressure was the lowest since cycle 15, as well as manifesting the lowest irradiance in the modern (space observation) era. So this anomaly would be expected, as would the SORCE data from that epoch reflecting the abeyance in solar activity.

Does this mean climate science has it all wrong and needs to give more credence or input to the Sun? Not at all! What it means, as pointed out during the 40th Solar Physics Division meeting which I attended in June of 2009, is that we need improved solar models! As noted during papers presented in that conference, the behavior of cycle 24 appeared to pose more serious questions for solar dynamo theory. This is the Babcock-Leighton theory that every 11 years or so, magnetic fields on the Sun attain a high torsional component which causes them to "twist" up and also move from more northerly to more southerly solar latitudes where most active regions (ARs) form.

Typically, this is around 22-23 heliographic degrees. But as assorted paper presenters at the solar conference observed, the torsional oscillation flow for the current cycle had been hovering near helio latitude 33 degrees, nearly 10 degrees off. Even moving at about 7 Mm (mega-meters or 10^6 meters) a year southward, this would take over 2 years to reach a latitude of 23 degrees, where large active regions (and spots!) ought to form.

Inteestingly, it was almost exactly two years after that notation that they did - and spaceweather.com reported large spots emerging!

Clearly, the solar dynamo model needs refining, and certainly basic concepts such as the emergence of tachoclines, and the meriodonal flows inside the Sun. To show how amiss we may be, one paper presented in that 2009 meeting displayed beautiful, multi-layered cross sectional views of the meriodonal flows in full color. But when the presenter was asked to show the actual observational data that supported it, nearly ninety-five percent of the colored lines and contours vanished!

Clearly, there's a lot of unwarranted extrapolation. For their part, the torsional oscillations tend to occur about 1000 kilometers below the Sun's surface (photosphere) but we have few instruments that can actually probe that deeply. One refrain one heard over and over in terms of supporting dynamo theory was: 'We need more money!'

If nothing else, and I propose extreme caution here- superior instruments (say designed for solar "sounding") might help to discriminate between the classical (e.g. Babcock-Leighton) dynamo theory and new ones involving "shallow" dynamos. In the latter case, ephemeral photospheric regions (EPRs) might be the first phenomena to be accounted for much in advance of actual sunspots seen as "inverse ion hurricanes". (EPRs, as the name implies, are not very stable or long lasting, usually appearing as small pores, then vanishing in 1-2 days)

In order to work then, a proper shallow dynamo theory needs to present sufficient observations to back up the supposition that a super-adiabatic temperature gradient is largest near the surface and its associated latent energy supports the reaction:

As is known from the standard (sunspot) theory of Parker, the "inverse ion hurricane" represented by a large sunspot enables the basis for the latent energy to translate into a convective collapse process so the luminosity can flow out and around the periphery of spots. This is why the more spots there are in a cycle, the higher the solar irradiance, and the higher the mean global temperature of Earth. (One can get variations up to 0.21 K or more). This is often counter intuitive, since spots are actually cooler regions in relation to the Sun's surrounding photosphere, which is roughly 1500 K hotter.

The bottom line is there is much more to learn, and we need more money ....yes, but this must go to better actual instruments to plumb the solar depths...not merely for more sophisticated computers to do more numerical simulations!

In this case, forecasting the basis of future cold winters, say before the onset of solar cycle 25, may depend much more upon the reliability of our solar dynamo models, than on any climate change models. The strongest suit of the latter is to provide us an enhanced and improved look at what happens when a variable such as UV input is altered by the behavior of the Sun. Hence, it is precisely our climate models that can provide ongoing checks on the validity (or not) of our solar models, as opposed to the converse.
Posted by Copernicus at 7:32 AM