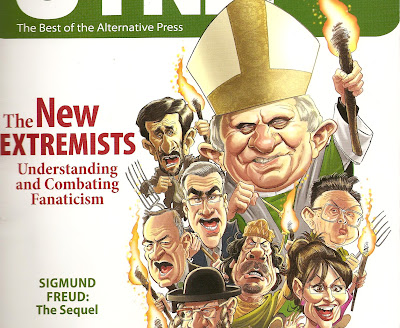 Off and on over the years, the UTNE Reader has been informative and been a force for progressive change with its thought-provoking articles. Generally, the quality of the journalism has been solid, well-researched and the writing excellent, much like its sister, 'Mother Jones'. Unfortunately, its latest issue (Nov.-Dec.) appears to have run off the rails.
One of its main articles (p. 48) is 'Fanatics Attack!', by Amos Oz, reprinted from his "How to Cure A Fanatic'. The piece purports to enable readers to recognize certain criteria of fanaticism and extremism, which include the desire to impose one's will (via conformity) on others, a certain shrill "militancy" of approach, a rejection of "live and let live" and....a lack of a sense of humor ("No fanatic I ever observed had a sense of humor") especially of the self-deprecatory style.

While I don't have too many complaints with the overall piece, though the humorless aspect can be questioned as any certifable trait for an extremist (since I've known many fine people who lack a sense of humor but certainly aren't "extremists") my main brief is with the front cover which depicts CURRENT TV'S Keith Olbermann shown amidst the likes of Muammar Gaddafi, Bill O’Reilly, Pope Benedict, Sarah Palin and Iran’s holocaust-denier Mahmoud Ahmadinejad. I mean, what the hell gives with this?

More difficult to ascertain is whether the author himself agreed to this cover portrayal, or whether it was an editorial board decision. If the latter, then clearly Amos Oz can't be blamed fully, for such a rash move. Nevertheless, I did send off a harsh email response to the editors, which is as follows:

"Hmmm….. an alleged “progressive”magazine, features a cover (Nov.-Dec.) with one of the staunchest speakers of truth to power, Keith Olbermann, portrayed amidst assorted wackos-extremists like Muammar Gaddafi, Bill O’Reilly, Cardinal “Rat” Ratzinger, Palin and Iran’s holocaust-denier Mahmoud Ahmadinejad? Are your editors mad? Or just temporary bonkers from….whatever? To conflate K.O. with absolute actual fanatics and extremists is in my mind an abomination, and one that will now cost you a future subscriber! (Not that a piddling single subscription is likely to matter to you!)

Conflating K.O. with the lunatics on the front cover serves no purpose, doesn’t advance the progressive cause (even via a phony false equivalence, e.g. “we can be as fanatic as them there Wingnuts”) and makes a mockery of all your author (Amos Oz’s) primary criteria and contentions. He doesn’t mention Keith by name, but I’d lay odds he includes him in this rogue’s gallery on account of what he (presumably) believes is “lack of humor”.

The truth is Keith is humorous on almost every occasion on CURRENT TV’s Countdown, but it’s a humor more in the tradition of George Carlin, as opposed to Moe, Larry and Curley… or Soupy Sales. That Oz doesn’t recognize that - or your editors don’t by portraying K.O. on the cover with the real nuts - shows perhaps none of you can tell a true extremist from a person who is merely vehement and passionate.

Sad, but your little ploy has actually only succeeded in further dividing the progressive cause!"

My point in sending this was not a puny threat of a minor loss in their finances, but rather to wake them up to the fact that progressives can't afford any more splintering at this stage of the game. Already the progressive Left appears to be divided over Obama's re-election although this ought to be a no-brainer. Take Obama away, or don't vote, and we get a Romney or god forbid, Rick Perry (see previous blog). There also appear to be a few fissures opening up in the support of the Occupy Wall Street protestors, though there shouldn't be.

So, the last thing we need here is a fierce disagreement over who to name in the category of fanatics and extremists! Further, the very act of remotely suggesting or putting Keith in that category is a slack, cowardly move (suggesting pandering to the corporo-media's false equivalence) that makes me fume! It also clouds the playing field and communications landscape.

Last night, Keith's Special Comment, on the vile beating (by Oakland police) of an Iraq War vet, giving him a fractured skull (he's now in intensive care) and the Mayor that condoned such extreme action, was one for the progressive archives.

It's a pity that UTNE no longer appears to be able to differentiate friend from foe.

But hey, maybe they would place me in their little cover cartoon too!
Posted by Copernicus at 12:25 PM