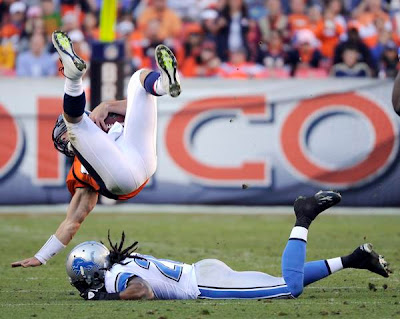 Saint Tebow dumped on his ass by a Lions' defender in today's 45-10 blowout game. Will this be a wake up call for the overpaid and over-hyped God boy? One can hope!


Well, as I forecast last week, after the Denver Broncos and their little miracle worker-God mongering Quarterback Tim Tebow eked out a last minute win over the pathetic Dolphins,

they wouldn't fare so well this week facing the Lions (in the NFC's "black and blue" division) of Detroit. I forecast the sanctimonious "John:3:16" citing little shit would be eaten, and he was - all his "Tebowing" (going down on one knee in a prayer pose) aside.

Indeed, at least two Detroit Lion players mocked "Tebowing," which was certainly their right after the NFL's most improved team blew out the Broncos, 45-10. This game was so satisfying on so many levels for anti-Tebows like me, it is difficult to recite them all. I could go through all the flaws in this pretender's throwing mechanics, but why bore readers with the details? Suffice it to say, this game above all shows the punk is overrated and likely overpaid.

All the Broncomaniacs went into delirium last week, but they forgot they were playing a team that was 0-5 and lacked their starting QB (Chad Henne) out for the year with an arm injury. The backup Matt Moore, has barely started six games! Now, meeting a fully operating team we see first hand the Broncos, or as I call them, the "ponies", are mostly smoke and mirrors and all of Tebow's prayers didn't stop the Lion's savaging!

Thankfully, there were many numbers as ugly as the final score:

Tebow and the Broncos' offense had nine, three-and-outs.

The offense was 0 for 10 on third downs before Detroit's D seemed to let them convert a couple in the fourth quarter.

Tebow took two delay-of-game penalties and seven sacks, one that resulted in a fumble returned by Lions' defensive end Cliff Averil for a touchdown.

Early in the fourth quarter, Tebow was an unsightly 8 of 25 passing for 87 yards and an interception that was returned 100 yards for a touchdown by Lions cornerback Chris Houston.

Maybe this will be the last we see or hear of that deplorable "Tebowing' nonsense.

One can hope!
Posted by Copernicus at 6:26 PM