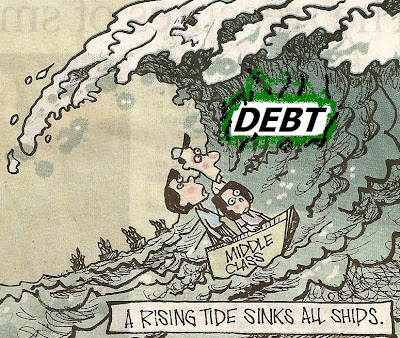 The muted scream from the headline piece in today's Wall Street Journal was almost palpable: 'DEBTORS HOBBLE U.S. ECONOMY!" I mean, the temerity of these once-upon-a-time deadbeats! To actually take their finances into their own hands and start paying down all their debts and cutting up their credit cards! WHO the hell do they think they are! To hear the main organ of reactionary finance tell it, you'd think the nation was inundated with millions of financial "Osama bin Ladens"!

What are the "crimes" committed? Let's summarize 'em here from the same piece (p. A1):

"Since the financial crisis erupted, millions of Americans have ditched their credit cards, accelerated mortgage payments and cut off credit lines that during good times were used like a bottomless piggybank.....As a result, total household debt - through payment or default- fell by $1.1 trillion or 8.6% from mid-2008 through the first half of 2011, according to the Federal Reserve Bank of New York.....

The national belt-tightening, known as de-leveraging, comes as the U.S. struggles to fend off a double dip recession"

The piece then drifts into other assorted complaints to do with this struggle: consumers (you never once see the word citizens!) pay off their bills at the expense of spending on appliances, travel, and "a slew of other products and services". It's also observed that home sales, "the engine of past economic recoveries" remains depressed.

The Journal, the established "voice" of Wall Street, then whines that "de-leveraging should help the U.S. economy in the long run, putting households on a sounder footing...but there are short term dangers."

They then briefly delve into the "paradox of thrift" first observed by John Maynard Keynes during the Great Depression. To briefly summarize: "when everyone turns frugal, everyone suffers. Synchronized thrift slows the economy" - according to Keynes.

Well, hold strain there a sec! Keynes also asserted that the solution, or the way to prevent or delimit such synchronized thrift, is for there to be a least ONE spender of last resort. This means that in a low aggregate demand environment, if ordinary folk aren't spending, and businesses aren't then the government has to! But what do we have? A bunch of crazy austerity minded nitwits in control of the House, blocking any spending that would get this nation back on its feet -including Obama's $447b jobs bill.

It is also a myth to say, as the Journal implies, that "everyone" is pulling back! The true fact it that the upper one percent are not - not by any means! They are blowing their wads on yachts, Bentleys, trips to Caribbean villas for "rose wine wraps" and special foie de Gras gluttonous meals....and plowing the rest into blood diamonds, gold coins and furs.

The Journal doesn't mention this little aberration in the spending constellation, but they should. It is misleading to portray the issue as if EVERYONE is really closing their purse strings. The reason they don't or can't mention that 1% aberration is that it would prove once and for all that Karl Marx was correct in Das Kapital: That capitalism's engine eventually runs dry when the mass of consumers it depends on to spend themselves silly and into debt slavery, can no longer do so. At that point, inventories build up, sales are non-existent, and businesses close as capital is squeezed.

The aberration also highlights the gross income -wealth inquality in the country. Because on account of low or stagnant wages, the majority have had to borrow to compensate ...and simply put, they can no longer afford to go that route. (All apologies to the lender cited in the WSJ piece who said he can no longer sleep nights because his loan portfolio has shrunken by 25%" Awww, too bad!)

Meanwhile, the Journal instead choooses to castigate the 99% for not spending enough despite the fact they are the sector most hammered by the stagnant wages and downturn!

Isn't this the rational response given or dictated by "rational expectation theory" of that one Econ Nobel Prize winner, Thomas Sargent? Well, anyway, we will get into that next week.

For now, it's clear the Wall Street reactionaries don't have a clue. Indeed, they have even less than the ordinary debt-laden citizen trying his best to get the debt monkey off his back. To show this one need look no further than the op-ed page (A16) of today's WSJ and the nauseating pissing and moaning that we "shouldn't be leaving Iraq" and it will make Iran's day. Well, too fuckin' bad, bozos.

That unnecessary intervention has already cost over a 1$ trillion (not even factoring in all the medical costs of the 32,000 injured and 500,000 mentally traumatized), 5, 000 American dead, and 600,000 Iraqis killed. All for what? Didn't this country learn from Vietnam? Didn't it learn from the British and Russians, who also tried to teach those Iraqis a thing or two? The sad thing is, even as the Journal rakes American debtors -consumers over the coals for not holding up their end of the GDP, it can't see that the financial waste in Iraq far surpasses even what consumers have already deleveraged! Yet they want to add to it!

Well, maybe we ought to give them a break.

They aren't rocket scientists over there at the WSJ!
Posted by Copernicus at 2:53 PM