The Antimatter Above Our Heads 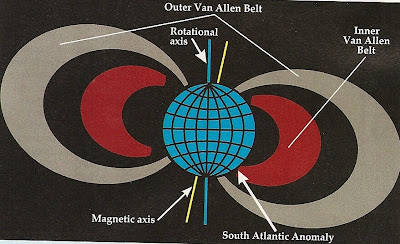 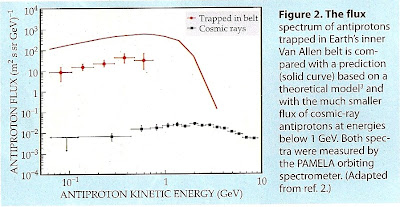 For many decades, since the famous Fitch and Cronin experiments apparently showing an asymmetry in respect of matter-antimatter formation in the cosmos, researchers have been seeking antimatter. Most often searches have been confined to the furthest zones of the universe, proportional to enormously long times ago and near the Big Bang epoch.

So who could have predicted the greatest concentration of antimatter yet seen would be literally above our heads? This is according to the orbiting spectrometer dubbed PAMELA, which is designed to detect charged particle of antimatter - whether positrons (e+, positive electrons) or antiprotons (p -).

PAMELA ('Payload for Antimatter-Matter Exploration and Light-nuclei Astrophysics') uses a tracking magnetic spectrometer as its principal component and it's half a meter long. Interested readers who'd like to learn much more about the craft, the instruments and mission can check the PAMELA site here:

Entering particles take a curved path in the spectrometer's B-field, as the field measures the particles' momentum per unit charge and the charge's sign. Basically, what gets plotted is the particle flux through the local plane whose orientation maximizes the flux (Fig. 2). Generally this plane also includes the associated magnetic field line (i.e. around which the charged particle is expected to spiral)

Anyway, PAMELA's discovery relevant here is the detection of a significant population of antiprotons which are magnetically trapped in the inner Van Allen radiation belt. (If you check the top image, this is the region in dark red). The flux of the trapped antiprotons spirallying around the inner belt's geomagnetic lines turns out to be a thousand times greater than the flux of cosmic ray antiprotons entering the atmosphere..

Now, referring to Fig. 2, the curve shown in light red denotes the expected p- flux spectrum based on a theoretical model by Richard Selesnick and coworkers. Meanwhile, five data points for the actual measured p- flux are shown just below. Comparing starting fluxes (vertical axis) one sees the latter initialized at 10 antiprotons per square meter per second per steradian per GeV- where the steradian is the unit solid angle and GeV is giga-electron volts. Since 1 eV = 1.6 x 10-19 J, then 1 GeV = (10^9) (1.6 x 10^-19 J) = 1.6 x 10^-10 eV.

One sees the model flux 10 times greater, at 100. Further it exceeds the measured data out to 1 GeV (horizontal scale).

Much less in flux are the cosmic rays, say originating from interstellar sources, which points are shown in black. Comparing the scales for flux, one easily sees the cosmic ray fluxes are fewer than those trapped in the inner Van Allen belt by about 1,000 times.

The mathematical basis for a typical plasma "mirror machine: is shown above, but we make the adjustment that the end points (at B = ± L) are “pinched” and thus of narrower bore than at the midpoint. (This is hard to show in a sketch so I leave it to you to do it mentally!)

In the case of the terrestrial mirror machine, the pinching is done most at the north and south magnetic poles. What we are saying then, is that charged particles - say protons OR antiprotons, will tend to bounce back and forth between L and (-L) which denote the pole locations with the magnetic mirror length = L.

Antiprotons entering the inner belt become similarly trapped. The existence of a resident trapped population of antiprotons invokes the mechanism shown below:

where antineutrons (n') are created in the pair-production process. It is surmised that the process above is initiated in atmospheric nuclei via cosmic ray protons with energies above 7 GeV. Like a free neutron, an antineutron decays into its charged partner with a half life of ~ 10 mins. The trapped antiproton population is thus created from the n-n' population. The basic principle underlying these pair production processes is the energy-time uncertainty principle: (delta E )(delta t) < h/ 2π where h is the Planck constant of action. Thus, a brief fluctuation occurring over time dt can produce a change in energy dE, which may be sufficient to produce particles., i.e. n' -> p- + e-.

Do we need to worry and fret about the antimatter above us? Could all those antiprotons suddenly flood into our main matter atmosphere and create an explosion rivaling Hiroshima or worse? OR...could it be used as fuel for spacecraft, you know, a Star Trek type matter-antimatter combustion engine?

Hardly! Even if one aggregated all the antiprotons in the inner Van Allen radiation belt and put them in one place, the total mass would be barely a few nanograms. (E.g. 3 x 10^-9 g) If you applied Einstein's mass-energy equation to obtain the energy released by annihlating all of the p-, it would amount to about the energy it requires to peel a banana.

Nothing to get worked up over!
Posted by Copernicus at 10:26 AM