Climate Skeptic Finally Gets It! 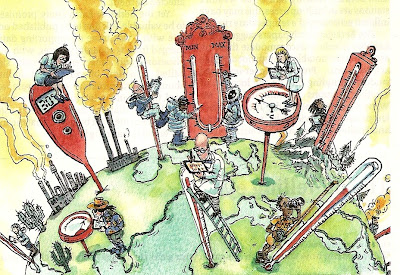 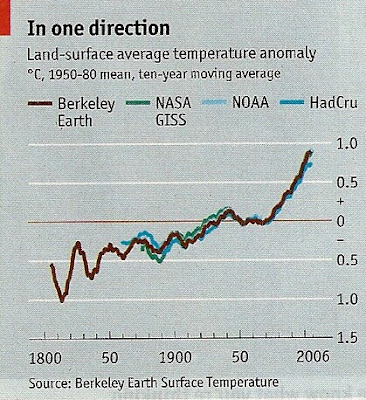 Well, it seems one of the last professional climate skeptics (I automatically disregard all those lacking climate science credentials) has now conceded that the mainstream scientific professional organizations - such as the National Science Foundation, National Oceanic and Atmospheric Administration (NOAA), NASA and the American Geophysical Union - are correct, and the global temperatures really are "rising rapidly". This according to a report appearing in today's Denver Post ('Skeptic No Longer Cool to Warming', p. 9A).

Richard Muller, an atmospheric physicist who is based at the University of California-Berkeley and the Lawrence Berkeley National Lab, has completed an extensive study - partly funded by the global warming denier Koch Brothers - which shows land temperatures are now 1.6 F degrees warmer than in the 1950s, even taking into account the "heat island" effects near cities (wherein dark asphalt surfaces generate additional heat which had been thought to skew temperature results by the skeptic brigade.)

Muller was apparently motivated by the so-called "Climategate" scandal where hacked emails from a British university (Univ. of East Anglia)apparently disclosed that critical information, data was being deliberately withheld from skeptics that requeste it. This, despite the fact that three separate independent investigations found the researchers at East Anglia to be guilty of nohting more aberrant than academic hubris, some mild snark and poor decision making. Certainly nothing to merit expulsion from any professional organizations or dismissal from their university positions!

But propelled by this incident, Muller proceeded to plumb a range of data, and went all the way back to the era of Benjamin Franklin and Thomas Jefferson for readings in the 18th century. The accumulated evidence from all his data showed agreement with the mainstream global warming research community, that Earth's land tempertures are increasing and more rapidly than ever. Muller, who is to present his results at a conference today, reinforced this by asserting (ibid.):

"Greenhouse gases could have a disastrous impact on the world."

At the same time, Muller insisted he approached the research deliberately from the climate skeptic perspective and said two years ago - when he began - "everyone should have been a skeptic". Not really!

As I noted, the emergence of that skepticism 2 years ago was essentially bogus. It was based on a misreading and misinterpretation of a 2008 paper appearing in Nature – written by Dr. Noel Keenlyside et al, and which made a tentative claim for monotonic global cooling since ca. 1998. This 'jumped the shark' and become embedded into the warming skeptics' arsenal of disinfo and set real global warming science education back at least a decade in my estimation. Fools and nitwits grabbed onto it like home made crack, much like they also (mistakenly) latched onto the climategate emails.

At the root of the misinterpretation of the data appearing in the paper, was the lack of anyone on the skeptics' side with adequate statistical background who could vet it properly. Thus, the first ones that did read it, didn't examine the graphs carefully enough and their rush to judgment of a "cooling since 1998" then entered the denier-skeptic lexicon and memosphere. Other lazy deniers then simply accepted the words or opinions of these initial inept readers rather than reading it themselves.

Instead of taking these shortcuts, skeptics could have retrieved the actual paper from Nature! They could have studied the paper's key figure, the one that looks at past and (forecast) future global temperatures, "Hindcast/forecast decadal variations in global mean temperature, as compared with observations and standard climate model projections".

The first thing they’d have noted about the figure - indeed, one major source of confusion-- is that each point represents a ten-year centered mean. That is, each point represents the average temperature of the decade starting 5 years before that point and ending 5 years after that point. Thus, the statistics for potential “cooling” could not possibly have been justifiably extrapolated beyond 1998 + 5 = 2003. Yet imbeciles all over the place have insisted it was ongoing.

Second, the skeptics would have spotted the red line in the Nature publication and – if bright enough – beheld that it was the the actual global temperature data from the U.K.'s Hadley Center for Climate Prediction and Research. They ought to have asked: Why did the red line stop in 1998 and not 2007? Again, it was a running 10-year mean, and the authors used data (from a Hadley paper) that ended around 2003, In effect, they couldn't do a ten-year centered mean after 1998.

Lazy deniers, however, have parlayed this simple statistical peculiarity of the data into believing that global warming factually STOPPED in 1998!

Third, at least one genius denier might have spotted the black line in the Figure, which was actually one of the IPCC scenario projections, labelled 'A1B.' It denotes a relatively high-CO2-growth model -- but actual carbon emissions since 2000 have wildly outpaced it. A further check by skeptics of the solid green line - the "hindcast" of the authors – e.g. how well their model compared to actual data (and the A1B scenario) could also be done. The lazy morons would have seen that, if extended (in dashes) through 2010 and finally to 2025, it JOINED up with A1B!

Another grievous source of confusion that has been misused by the deniers is the authors statement:

“Our results suggest that global surface temperature may not increase over the next decade, as natural climate variations in the North Atlantic and tropical Pacific temporarily offset the projected anthropogenic warming”

But what they really meant by that statement was not what a simple reading of that sentence would suggest: They did not mean that "the global surface temperature may not increase over the next ten years starting now."

What they meant is what the lead author, Dr. Noel Keenlyside, later provided in a clarification letter to the publicaton: They were predicting no increase in average temperature of the "next decade" (2005 to 2015- relative to their data timeline) over the previous decade, which, for them, is 2000 to 2010! And that is, in fact, precisely what the figure shows -- that the 10-year mean global temperature centered around 2010 is the roughly the same as the mean global temperature centered around 2005.

What is dismaying to those who have done research is how deficient the average denier-skeptic is, and how difficult it is to impart correct interpretation of data minus the bogey of ideology which stalks every word written on global warming.

The good thing is at least one former skeptic is now in the mainstream camp, though he did take care not to venture into the cause of the rapid temperature increase, which 96% of climate scientists believe is due to man-made fossil fuel generation.

Perhaps Muller didn't wish to insult his fossil fuel manufacturing -warming skeptic benefactors any more by going there.
Posted by Copernicus at 10:03 AM