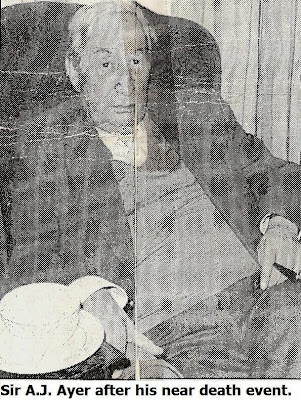 Sir A.J. Ayer, the author of Language, Truth and Logic, was one of the great atheist philosophers of the 20th century. He also introduced the principle of verification, which insisted that language - to be useful and worthwhile- had to relate to an objective reality or evidentiary basis. One of his most famous quotes is (op. cit., p. 158):

"The fact that people have religious experiences is interesting from a psychological point of view, but it does not in any way imply that there is such a thing as religious knowledge.”

Anyway, in The London Sunday Telegraph of August 28, 1988, Sir Ayer recounted a near death experience he had in a piece entitled 'What I Saw When I Was Dead'. This follows in two parts:

My first attack of pneumonia occurred in the United States. I was in hospital for ten days in New York, after which the doctors said that I was well enough to leave. A final X-ray, however, which I underwent on the last morning, revealed that one of my lungs was not yet free from infection. This caused the most sympathetic of my doctors to suggest that it would be good for me to spend a few more days in hospital. I respected his opinion but since I was already dressed and psychologically disposed to put my illness behind me, I decided to take the risk. I spent the next few days in my stepdaughter's apartment, and then made arrangements to fly back to England.

When I arrived I believed myself to be cured and incontinently plunged into an even more hectic social round than that to which I had become habituated before I went to America. Retribution struck me on Sunday, May 30. 1 had gone out to lunch, had a great deal to eat and drink, and chattered incessantly. That evening I had a relapse. I could eat almost none of the food which a friend had brought to cook in my house.

On the next day, which was a bank holiday, I had a long-standing engagement to lunch at the Savoy with a friend who was very eager for me to meet her son. I would have put them off if I could, but my friend lives in Exeter and I had no idea how to reach her in London. So I took a taxi to the Savoy and just managed to stagger into the lobby. I could eat hardly any of the delicious grilled sole that I ordered but forced myself to keep up my end of the conversation. I left early and took a taxi home.

That evening I felt still worse. Once more I could eat almost none of the dinner another friend had brought me. Indeed, she was so alarmed by my weakness that she stayed overnight. When I was no better the next morning, she telephoned to my general practitioner and to my elder son, Julian.

The doctor did little more than promise to try to get in touch with the specialist, but Julian, who is unobtrusively very efficient, immediately rang for an ambulance. The ambulance came quickly with two strong attendants, and yet another friend, who had called opportunely to pick up a key, accompanied it and me to University College Hospital.

I remember very little of what happened from then on. I was taken to a room in the private wing, which had been reserved for me by the specialist, who had a consulting room on the same floor. After being X-rayed and subjected to a number of tests, which proved beyond question that I was suffering gravely from pneumonia, I was moved into intensive care in the main wing of the hospital.

Fortunately for me, the young doctor who was primarily responsible for me had been an under-graduate at New College, Oxford, while I was a Fellow. This made him extremely anxious to see that I recovered; almost too much so, in fact, for he was so much in awe of me that he forbade me to be disturbed at night, even when the experienced sister and nurse believed it necessary.

Under his care I made such good progress that I expected to be moved out of intensive care and back into the private wing within a week. My disappointment was my own fault. I did not attempt to eat the hospital food. My family and friends supplied all the food I needed.

I am particularly fond of smoked salmon, and one evening I carelessly tossed a slice of it into my throat. It went down the wrong way and almost immediately the graph recording my heartbeats plummeted.

The ward sister rushed to the rescue, but she was unable to prevent my heart from stopping. She and the doctor subsequently told me that I died in this sense for four minutes, and I have had no reason to disbelieve them.

The nurses were more optimistic, and Nicholas sensibly chose to believe them.

I have no recollection of anything that was done to me at that time. Friends have told me that I was festooned with tubes, but I have never learned how many of them there were or, with one exception, what purposes they served. I do not remember having a tube inserted in my throat to bring up the quantity of phlegm which had lodged in my lungs. I was not even aware of my numerous visitors, so many of them, in fact, that the sister had to set a quota. I know that the doctors and nurses were surprised by the speed of my recovery and that when I started speaking, the specialist expressed astonishment that anyone with so little oxygen in his lungs should be so lucid.

My first recorded utterance, which convinced those who heard it that I had not lost my wits, was the exclamation: "You are all mad." I am not sure how this should be interpreted. It is possible that I took my audience to be Christians and was telling them that I had not discovered anything "on the other side." It is also possible that I took them to be skeptics and was implying that I had discovered something. I think the former is more probable, as in the latter case I should more properly have exclaimed, "We are all mad." All the same, I cannot be sure.

The earliest remarks of which I have any cognizance, apart from my first exclamation, were made several hours after my return to life. They were addressed to a Frenchwoman with whom I had been friends for over 15 years. I woke to find her seated by my bedside and started talking to her in French as soon as I recognized her. My French is fluent and I spoke rapidly, approximately as follows:

"Did you know that I was dead? The first time that I tried to cross the river I was frustrated, but my second attempt succeeded. It was most extraordinary. My thoughts became persons."
The content of those remarks suggests that I have not wholly put my classical education behind me. In Greek mythology the souls of the dead, now only shadowly embodied, were obliged to cross the river Styx in order to reach Hades, after paying an obol to the ferryman, Charon.

I may also have been reminded of my favorite philosopher, David Hume, who, during his last illness, "a disorder of the bowels," imagined that Charon, growing impatient, was calling him "a lazy loitering rogue." With his usual politeness, Hume replied that he saw without regret his death approaching and that he was making no effort to postpone it. This is one of the rare occasions on which I have failed to follow Hume. Clearly I had made an effort to prolong my life.

The only memory that I have of an experience, closely encompassing my death, is very vivid.
I was confronted by a red light, exceedingly bright, and also very painful even when I turned away from it. I was aware that this light was responsible for the government of the universe. Among its ministers were two creatures who had been put in charge of space. These ministers periodically inspected space and had recently carried out such an inspection. They had, however, failed to do their work properly, with the result that space, like a badly fitting jigsaw puzzle, was slightly out of joint.

A further consequence was that the laws of nature had ceased to function as they should. I felt that it was up to me to put things right. I also had the motive of finding a way to extinguish the painful light. I assumed that it was signaling that space was awry and that it would switch itself off when order was restored.

Unfortunately, I had no idea where the guardians of space had gone and feared that even if I found them I should not be able to communicate with them. It then occurred to me that whereas, until the present century, physicists accepted the Newtonian severance of space and time, it had become customary, since the vindication of Einstein's general theory of relativity, to treat space-time as a single whole.

Accordingly, I thought that I could cure space by operating upon time.

(To Be Continued)
Posted by Copernicus at 10:57 AM