Are College Students Getting Gypped? 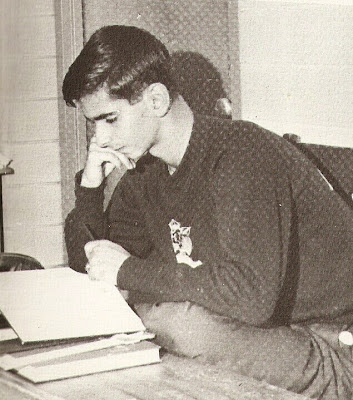 A Loyola University frosh (ca. 1966, note slide rule) tries to master a chapter in his Mechanics & Heat text. The average frosh then consumed nearly 45 hours a week in study and doing homework!


One has to ask that question after some of the latest results on university education disclosed in the book: Academically Adrift: Limited Learning on College Campuses, by Richard Arum of New York University and Josipa Roksa of the University of Virginia. Readers will also recall that in January of this year I blogged on a number of issues that evidently were downgrading the collegiate learning experience:

For example, I noted that barely one -fifth of freshmen are required to take any course in which they have to read more than 30 pages per week, or write (compose) more than three, 3-page essays or homework papers per term. This was by contrast with the 1960s when a standard week would find a student (in the sciences or humanities) easily having to digest more than 400 pages per week, including chapters of extraordinary complexity.

Escaping writing? You've got to be kidding! This type of assignment, which usually demanded at least seven written pages, sometimes eight (depending on the questions) was given three times each week conforming with the frequency of the class taken (say in literature, philosophy, Logic or language studies).

Even in physics, one couldn't escape some writing. Our professor, Dr. Carl Brans (who is listed with Robert Dicke as co-author of the Brans-Dicke theory of cosmology) often required detailed interpretations of assorted Mathematical Physics questions, and an emphasis on the interpretation of the solutions. (For example, explaining why a given Green's function was set up a certain way).

Now, Arum's and Roksa's book documents the current writing-reading deficiencies and more, including:

- Gains in critical thinking, complex reasoning and writing skills are " or either exceedingly small or non-existent for a large proportion of students"

- Thirty -six percent of students experienced no significant improvement in learning (as given by the Collegiate Learning Assessment) over 4 years of education. This means these kids could have essentially saved their money and not gone into massive debt most will now take the rest of their lives to pay off.

During my college days, a core of subjects was required to be taken by all students, including: language and literature, philosophy, logic, calculus, one science course (physics, astronomy, biology or chemistry), one foreign language (e.g. German, Russian or French) and either macro-economics or political science. Meanwhile, a review of more than 1,000 colleges and universities today found that 29% of schools require two or fewer core subjects. That means there's been a quality decline in almost one third of the schools!

Do college students feel they're getting short changed? A Roper survey recently found that nearly 50% of graduates didn't feel they got their money's worth. That is a massive crisis by any definition. It shows that universities are not seriously doing the jobs for which they've been charged. Indeed, as the authors noted in a mass-circulated letter, those schools not demanding a rigorous curriculum "are actively contributing to the degradation of teaching and learning".

This, at a time when colleges and universities - both private and public- are charging ever more for tuition, as well as other services.

Though getting a job is often listed as a criterion for "getting one's money's worth from college", I don't really agree. As I blogged before, getting a great job is really "icing on the cake" of a sound education that puts one in a position for lifelong learning. But it isn't the be-all and end-all.

In his article, 'The Myth of Higher Education' Dr. Steven Mason in an issue of Integra (No. 9, Oct. , the journal of Intertel), notes that a huge error of American education is orientating it explicitly for the utilitarian purpose of making money or getting a job. As he writes:

I totally agree. To me the measure of whether one obtained a degree worth the cost is how well one is motivated to use his learning as a base to expand it further: to delve into new or unfamiliar areas, or use the techniques mastered (say in a research area of one's specialty) to apply to other arenas. If these skills are only limited, and above all if one's fundamental working knowledge base is limited - whether in economics, American government, history, science or numerical literacy, then one can rightly complain he or she didn't get one's money's worth.

Even with a college sheepskin, people will not work all their lives. It's what they do with their time when they cease working that really indicates the quality of the higher education they received!
Posted by Copernicus at 3:20 PM