BWAAAA! You Can't Be HIS Friend and Mine TOO! WAAH! 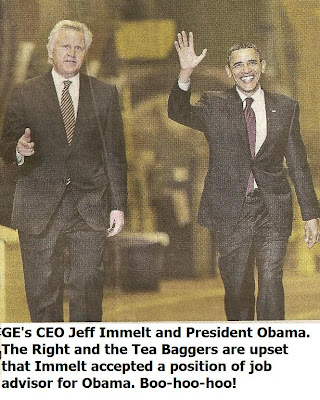 In the annals of human pathos there's probably no more miserable a sight than a whiny kid whose friend suddenly goes off to be friends with another kid (though he hasn't indicated any desire to cease being friends with the first, merely to add another) leaving the original kid feeling betrayed and angry. That original kid then raises a hue and cry, pitching a hissy fit and tantrum because he's too paranoid to understand or see he isn't losing a friend, but merely expanding his existing social set.

Fortunately, most humans grow out of this immature mental phase and finally grasp that yes, it is possible to have connections, and even friendships with more than one person at the same time. And also, the fact a friend does have communications or friendship with another doesn't mean he is betraying the first, or stabbing him in the back!

But try to tell that to the Tea Partiers and the Right, the ultimate exponents of human paranoid psychosis.

According to a piece in today's Wall Street Journal: 'Tea Party Attacks Put GE on Defense' (p. B1), the whole of the immature U.S. Right is exercised, frothing at the mouth and screaming like banshees because Jeff Immelt of GE (formerly a bastion of the Right since Ronnie Reagan worked for them and did commercials) agreed to work on President Obama's Council on Jobs.

The attacks span the whole looney tune Right spectrum from Sarah Palin ("Immelt's the poster child for crony capitalism"), to Bill O'Reilly, Newt Gingrich and Wayne T. Brough, chief economist at FreedomWorks a national Tea Party group. In most cases, all the attacks focus and concentrate on GE allegedly getting special favors because of Immelt's proximity to the White House, which GE vigorously denies, noting "We are not receiving special treatment, we compete for business just like everyone else."

"The company said it isn't cozy with Washington. The company has received $127 million in contracts, grants and loans from the $787 billion federal stimulus package, accroding to Recovery.gov. This placed GE well out of the top 20 which received more than $400 million each. GE's sales to the federal government acconts for only 4% of the company's total revenue".

So why this misperception among the Tea Baggers? The most plausible reason is a free-floating paranoia which intervenes whenever certain sets of humans who feel hard put upon or oppressed see others linked up to a group or person they despise. In this case, Jeff Immelt is the person the Tea Party sees close at the hip to Obama so they speculate in their over-active, suspicious and paranoid minds that the two must be in collusion or "conspiracy". What else could it be? The thought that Immelt may just have believed he was doing something to help the country doesn't cross their mind.

Generally, this type of paranoia doesn't manifest in groups, though it is notable that Major League Baseball actually has a rule that players can't be seen fraternizing with opposing team players during games. Hey! Fans may get the wrong idea and actually think they're pals when they need to be enemies! Like those Cards and Brewers now playing in the NLCS!

Much more likely is the paranoia about cross-fraternizing rears itself most often in schizoid types, individuals who have very closed circles of friends and who don't get out much. In such circumstances their minds play tricks on them and almost anything can then be interpreted as a once close friend lining up against them, though there is no basis for this in reality. But the schizoid mind (not to be confused with schizophrenic) doesn't process reality, only an egocentric solipsism centered on their own issues, needs, preferences and prejudices.

Could the whole Tea Party movement be afflicted with a schizoid embolism?

Doubtful. More than likely they're all just pissed that the major CEO of a corporation has seen fit to join in common cause with Obama to try to improve the American jobs picture. As Immelt himself said (ibid.):

"I am leading the jobs council because I thought it was the right thing to do. In the U.S. it is controversial, it is the time we live in..."

As for the gyrating stock market, Immelt added:

"Congress doing just one bipartisan thing, however small, would be conducive to the market"

I'm not so sure about that, but I am sure that if this country is to strengthen it will need to have more compromises across the board. That is especially in reference to solving our long term economic malaise. For a start, we need Righties and Tea Partiers to accept higher taxes!
Posted by Copernicus at 1:04 PM