Dark Matter DOES Exist - In Space! 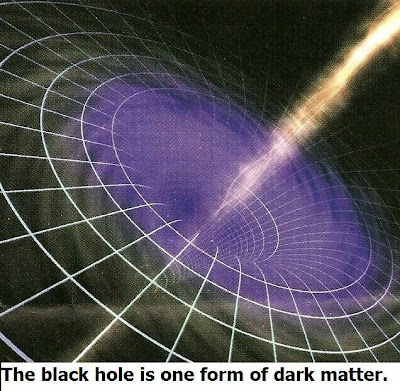 The recent article appearing in The Economist ('The Dark at the End of the Tunnel?', Sept. 17, p. 85) appeared to suggest that the evidence for dark matter is only now beginning to be accepted by a certain skeptic faction of physicists, based on recent experiments at the Gran Sasso Laboratory in central Italy. This is based on the first empirical evidence for WIMPs or weakly interacting massive particles (see, e.g. 'To Catch A WIMP', in SCIENCE, Vol. 275, March 21, 1997, p. 1736).

But in fact, the evidence for dar matter is already essentially signed, sealed and delivered, and even The Economist acknowledges (ibid.):

"Physicists are pretty confident dark matter exists. Astronomical observations first made in the 1930s show there is not nearly enough ordinary matter to hold galaxies together as they spin around."

Indeed, this is spot-on correct.

The detection of extended dark matter can be traced back to 1933, when Fritz Zwicky's measurements of galaxy clusters highlighted a ‘missing mass’. He found that the mass needed to bind a cluster of galaxies together gravitationally was at least ten times the apparent mass visible. This mass, because it was inferred but not directly detectable, became the first ‘dark matter’. Around the same time there were observations of stellar motions in the galactic plane by Dutch astronomer Jan Oort. He found there had to be at least three times the mass visibly presenting in order for stars not to escape the galaxy and fly off into space.

By the late 1970s, astronomers realized there were other forms of dark matter. Among the most discussed candidates were black holes, marking the end stage of evolution for very massive stars. In the black hole, the gravity is so strong that no light escapes and the mass typically is much greater than that of the Sun. These objects can only be detected indirectly, e.g. as a member of a binary (double) star system, to infer its presence from the intense x-rays given off when the companion star’s gaseous layers are sucked into it.

Non-baryonic dark matter further breaks down into cold dark matter and hot dark matter. The terms hot and cold are not so much indicative of current temperatures, as the phase of the early universe at which the particular dark matter ‘decoupled’ from the hot radiation background. An early decoupling implies a higher ambient background radiation temperature of the primeval cosmos. A later decoupling correlates to a cooler temperature. Perhaps the most widely studied candidate of hot dark matter is the neutrino.

By contrast, cold dark matter candidates tend to have larger mass and amongst the most likely suspects are: gravitinos, magnetic monopoles, and primordial black holes. However, there are a couple of exceptions to this, which include: WIMPs and Axions.

The issue then in The Economist article is not so much whether dark matter does indeed exist, but whether one particular form for cold dark matter (the WIMP) has actually been detected at the Gran Sasso Lab (in an experiment abbreviated 'DAMA')

In the DAMA experiments, conducted some 1,400 meters below Gran Sasso, physicists have searched for (electro-) weak force mediated collisions between terrestrial atoms and WIMPs from the dark matter halo of the Milky Way. If such collisions actually occur, then they should be able to cause recoils of the atomic nuclei. With the proper apparatus such recoils ought to be observed.

In the case of the DAMA experiments, a 250 kg (550 lb.) crystal of sodium iodide is used, and the recoils measured within it. More than 15 years of operation have resulted in hundreds of thousands of collisions being recorded - though most have not been caused by dark matter. The lead investigator, Rita Bernabei of the University of Rome, still can't tell which of the recorded events are caused by WIMPS but she claims to see a discernible pattern. That is, every year the number of collisions rises until it peaks in May, and every year the collision frequency minimized in November. Bernabei believes this to be strong evidence some of the collisions arise from interactions with WIMPS because the motion of the Earth would be added to the speed with which the solar system moves through the galactic halo in the summer, while it would be subtracted in the winter. (Recall here from the Basic and Intermediate Astronomy blogs, that the Earth is moving faster as it approaches the perihelion of its orbit in January, while it'd be moving slower as it approaches aphelion in July).

But, of course, not everyone agrees , nor should they! Every cyclic correlation must be treated with skepticism and suspicion since the most classic case of false correlation ever occurred more than forty years ago when UFO observations were found to increase significantly with the oppositions of Mars. Did these mean more UFOs were spaceships arriving from Mars at each opposition - because at that point Mars was closer to Earth? Obviously not! But it shows the dangers inherent in not filtering out all possible signals. In the case of the "Martian" Opposition UFOs, they were found to be merely statistical coincidences. The simplest explanation? Mars appeared so much brighter at its opposition that millions of people around the Earth just mistook it for a "UFO"! Don't laugh! When I used to investigate UFOs as a pastime in Barbados, most of the time it was the planet Venus that had been wrongly perceived!

Lastly, other alternative experimental setups may be more able to ferret out real WIMP collisions. One example, from the Max Planck Institute, uses crystals of calcium tungstate cooled to within a few thousandths of a degree of absolute zero. Special thermometers are then introduced to detect any minuscule temperature increases expected to occur when subatomic particles collide with any of the Earth-components of the material and heat the material up. The investigators believe they can recognize the WIMPs by tiny flashes of light generated in each collision - as well as heat. (Dark matter collisions produce less light than non-dark matter collisions that generate the same amount of heat)

Stay tuned!
Posted by Copernicus at 10:29 AM