Has Evil Declined as Civilization has Progressed? 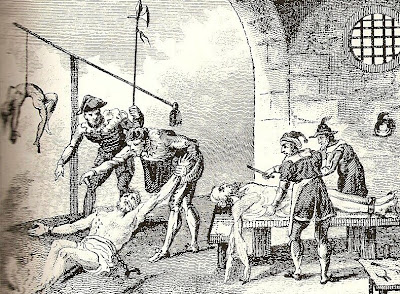 Was the past more replete with vicious or evil people than modern history?

(ABOVE) Inquisitors tormenting a lesbian (left) and two heretics (foreground) ca. 1301. Bottom, bodies found at the Mauthausen concentration camp in May, 1945 by Russian troops. 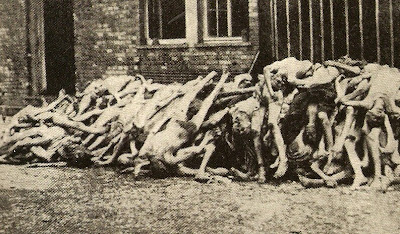 This is a key and very crucial question. If indeed the aggregate indices and totality of evil -we are talking about human-instigated evil - have declined, then it means nearly all the apocryphal tales of religious books and literature are wrong. That means in addition, that the entire meme and theme of "Eschatological Messianism" is defunct and debunked. The latter, of course, refers to the period of glorious dominion presumed to follow the last period of world history - after Armageddon, when the "Antichrist" ( the ultimate Evil-doer) is due to briefly reign, followed by a Second Coming of Christ.

But if Evil is actually declining, it means there'd be no need for a Second Coming, and that Armageddon itself is plausibly a myth. I mean, how or why have an ultimate battle of good v. evil if the evil side is getting more and more reduced with each jump of civilization?

These propositions, or their derivatives, are implicit in Stephen Pinker's new book, The Better Angels of Our Nature: Why Violence Has Declined. (And I am deliberately associating violence with manifest human evil as at least a proxy indicator of its extent). Pinker's arguments are essentially based on two propositions that he set out to prove:

1) The past was far more beastly and vicious than presumed to be, and

2) The present is vastly more peaceful, contrary to appearances.

In a way these propositions are fairly sound. For example, in the immediate past rationalism was virtually non-existent or rare and when rationalists did emerge, they were rapidly eliminated. Not only their minds, but bodies too - as well as property and often offspring. Most of this was done via The Inquisition which lasted for nearly 700 years. One image shown, depicts the inquisitors as they applied sundry tortures to 'heretics" (including atheists) who didn't accept their beliefs.

In his excellent monograph The Inquisition of the Middle Ages, 1954, Henry Charles Lea - in his chapter 'Subjection of the State'- also notes how papal bulls and direct threats were used to subvert and co-opt all state, civil authorities. To render them useless to opose the will of the Inquisition. One such bull was Ad extirpanda (ibid., p. 33) issued by Pope Innocent IV on May 15, 1252, which was:

“a carefully considered and elaborate law...to establish machinery for systematic persecution as an integral part of the social edifice in every city and every state”

Each ruler or magistrate thereby became the extension of the Church itself, and could apply bans, imprisonment, property confiscation or outright punishment to those deemed "heretics" and do it in the name of “the Holy Inquisition".

Ad extirpanda ensured that the vicious violence perpetrated under the guise of protecting dogmatic or doctrinal purity was applied to a vastly larger population than it otherwise might have been. Because of its violent extent and that includes to property, it's estimated that by the middle -1300s half the population of then western civilization had been subjected to it, an unheard of proportion.

By comparison, the most recent vast outbreak of violence was World War II in which some 73 million are estimated to have been slain, either in direct combat, in brutal purges or exterminations such as the Nazis perpetrated in their concentration camps (see second image of Mauthausen Concentration camp after its liberation in May, 1945). Even so, 73 million dead would not even comprise 10% of then western civilization, say ca. 1944-45.

Thus, although modern era evil and violence appears more extensive and vile, it really isn't. It's a trick of our perception and historical bias. Pinker himself argues that murder rates in England peaked in 1300 and in New England in the late 17th century. Afterwards, both fell dramatically.

He also accurately notes that in the modern era (from late 19th century through today) wars rather than street violence, tribal and religious wars or crimes, account for the lion's share of violence, and hence evil. But even killings in conflicts, the "curse of humanity since the ancient world" have been in marked decline for the past two decades. And while we may see genocides in these conflicts, such as in Rwanda in 1994, they pale beside the genocides conducted by Israelite Tribalists ( in the name of Yahweh, against the Canaanites, etc), if Genesis is to be believed. Indeed, if those accounts are true, it means some 500 -1000 times more humans were wiped out (as a proportion of then population), never mind the justification for it (self-proclaimed self- righteous cults or religions will always seek to justify their slaughters!)

In this sense, Pinker's excellent graphs tell a lot of the story. For example, as expected. World Wars I and II show highly peaked points- then there's a bumpy but consistent trailing off following WWII. In terms of statistical frequency, the 20th century naturally stands out for the sheer scale of the destruction of human life, including via atomic bomb, gas chambers and other devices.

However, when one normalizes the graphs to populations present in the key eras, one finds that the past was actually far more vicious and the violent deaths - including of being carved open by an Inquisitioner then your entrails removed and fed to the fires while fully conscious - more common than the 20th century or even present. Is dying by Zyklon B in a Nazi gas chamber worse than an Ad Extirpanda- mandated inquisitor using his knife and pliers to cut out your insides while you're awake? I'm not sure I even want to go there. But the fact is, by proportion of the respective populations, many more humans were dispatched in the latter mode than the former. And we won't even bother to detail all the homosexuals, including lesbians, who were suspended after having their genitals spiked through using massive carved out tree branches and roots.

Finally, Pinker expatiates on the neuro-plasticity of the human brain and its ability to change in response to experience. He implies from this that people are less likely to resort to violence in their daily lives than their forbears, and that other behavioral changes and strategies work better. Of course, this assumes all factors are equal and they may not be.

For example, in two earlier blogs I discussed the likely (and increasing role ) of brain parasites in incepting violence as well as causing severe mental disease or disorders leading to violence, e.g.

This means, if such parasites are indeed more prevalent than many assume (and will get worse with climate change, e.g.


then humans may well have little or no control on whether they will become violent or not. If a parasite embeds itself, say in the amygdala, the incitement to violence may be automatic.

Beyond this, there is the catastrophic approach of Peak Oil. Indeed, as the recent issue of MONEY magazine (December, p. 70, 'Making A Bet on Scarcity') has warned:

"Many experts believe that global oil supplies are near or past their peak, while demand for energy product shows no signs of abating"

Indeed, and the drastic consequences of energy supply collapse in the face of exponentiating demand have been well described here:

The gist of it is that as the oil to support our energy-intense civilization ebbs, it will become harder to obtain water, affordable food as well as other amenities now deemed basic for living a civilized life.

When the old order finally breaks down, with power grids kaput because of too high demand during global warming heat spells, and food in too short a supply because of oil costs at $300 a barrel, it will literally be every man for himself.

In such a brutish world, it will be hard to imagine brain "neuro-plasticity" saving the day and spontaneously encouraging any "angels of our better nature". More than likely, as the final food stores vanish, most of that brain power will be needed to avoid rampaging cannibals and assorted other 2-legged predators.
Posted by Copernicus at 10:36 AM