It May Now Be Time To Mint Some Trillion Dollar Coins To Avert A Repuke Terror Act: Debt Default 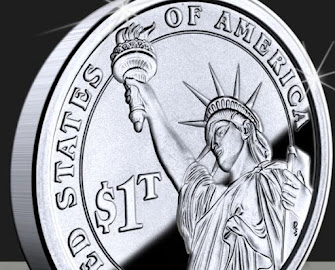 Will Yellen approve the trillion dollar coin to stop the Repubs?

"In finally reaching an agreement this week to raise the federal debt ceiling, ensuring that the United States can pay its bills for the next few months, the members of the U.S. Senate have performed a public service roughly akin to that of a would-be arsonist who pockets the matchbook and walks away from the straw.

In 2019, the last time Congress played with fire before finally raising the ceiling, this board wrote that “anything short of eliminating the ceiling is legislative malpractice at public expense.” These past few weeks of completely unnecessary brinkmanship have only served to strengthen that judgment."  - NY Times Editorial

The degenerate Republican terrorists are now prepared to crash the economy via debt default on December 3rd  - the new deadline for the existing temporary reprieve.   Let's be very clear that McConnell has merely engineered a new, more dramatic standoff that ensures Congress will merely be in the same precipitous spot in refusing to raise or suspend the debt ceiling. The ceiling is a limit on federal borrowing, much like the limit on a credit card. The government only borrows to provide for spending previously authorized by Congress, or to pay the interest on outstanding debts.

Congress has already voted to spend this money. The only choices at this point are raising the debt limit so that the necessary money can be borrowed, or breaking promises. Failing to raise the debt ceiling would amount to taking a hammer to the foundations of the global financial system, which rests on the absolute confidence of investors that the United States will always repay its debts.  (Including $7 trillion compliments of the Repukes) .

The nation cannot allow this to happen.  When extraordinary threats from domestic enemies and traitors emerge, there must be extraordinary means to beat them back. The Biden administration and the Treasury cannot allow McConnell and the Trump-infected GOP to take the country hostage.  But how to avoid this looming catastrophe which McConnell will be under immense pressure to fulfill from his insane cult "party"?

A 1997 law intended to help the U.S. Mint make money off of coin collectors may provide the solution - albeit an outlier, unconventional one.  Basically it gives the Treasury secretary the power to mint platinum coins of any denomination, for any reason. When commentators discovered this law during the 2011 and 2013 debt ceiling battles, they realized that this power could offer a way to sidestep the legal cap Congress places on the federal government’s borrowing.

Instead of issuing new debt and running afoul of the debt ceiling, the Treasury secretary could simply fund the government by minting platinum coins. In 2013, even former U.S. Mint Director Philip Diehl agreed it would work, and over the years, influential voices like financial journalist Joe Weisenthal and New York Times columnist Paul Krugman have also promoted the idea  .

Whence it came?  Not from any of these econ cognoscenti but from a short comment on financier Warren Mosler’s blog posted on May 24, 2010, at 8:29 pm:

Congress has already delegated to Tsy [Treasury] all the seignorage power authority it needs to mint a $1 trillion coin (even numismatic coins are legal tender at their face value and must be accepted by the Federal Reserve)– the catch is, its got to be made of platinum

Mosler is [a] founder of Modern Monetary Theory, which is quite popular among progressives these days. Modern Monetary Theory, or MMT, is a heterodox school of economics that argues that concerns about the national debt are often overblown.   Well, it IS.  No other nation on Earth engages in this BS of farting around with a debt ceiling each year. It simply isn't done. Nations pay their outstanding debts, full stop.

According to The Financial Times Brendan Greeley:

The US Mint is a factory. It buys metal, stamps it into coins, then sells those coins to the Federal Reserve at face value. The mint’s profit is called “seigniorage”. It goes to the person known in Middle English as the seigneur — the person in charge. Think of Janet Yellen as America’s seigneur.

When Congress runs a deficit, it is instructing the Treasury Department to produce new dollars. As secretary, she has to figure out how.

Well, printing a trillion dollar platinum coin or two, or three would be one way to end the debt ceiling standoff, say in an emergency situation.  As Mr. Greeley points out, Yellen would first have to direct the mint to stamp an ounce of platinum into a proof:  a limited run, finely made coin. (More such proofs can be delivered if enough platinum is available.)  Next she would sell that proof (or proofs) to the Federal Reserve at a face value of $1  trillion.  Yellen, as seigneur would net "about $999,999,999,000.00".  (More if more coins are made).

Greely notes that Yellen has not taken the idea seriously, ruling it out as a "gimmick".  But let's be clear that the Repukes threat to crash the economy and shut the government down in December is no "gimmick". It is a desperate ploy to undermine Biden's agenda while paralyzing the country and risking a global depression, all for a power grab.

For starters, Treasury purchases (Treasurys buy up debt, and are  specific financial contracts sold in markets) would stop as any new auctions would come to a halt under Republican threats.   In other words, the impact of carrying out the GOP threat would be carnage in global bond markets. Which is why the seigniorage option is being seriously considered, never mind Yellen dismissing it. (Besides, the very fact she is being asked about by serious economic journalists is a testament to the power and reality of the idea.)

Greeley himself assuages the nervous Nellies and outright skeptics by providing a historical perspective, i.e.

Most years, the mint transfers several hundred million dollars of seigniorage to the Treasury Department’s account at the Fed. Legally, the trillion-dollar profit on the platinum proof coin would be just like what the mint earns on quarters. (But these are both types of seigniorage in the way that a wanton mistake at an office party and a secret family in another city are both types of adultery.)

Seigniorage has always been a delicate negotiation between seigneur and subjects. Take too much profit on coins, and they can begin to lose value. Take too little, and they become too valuable to circulate. There are, however, two historical precedents for seigniorage that high: siege coins and tokens.

Under a literal siege, a medieval city could issue scraps of stamped leather, to be redeemed for coins when the siege lifted. Perhaps this is what the platinum proof coin would be: a temporary way to deal with barbarians. But Yellen could also just decide that the coin is a trillion-dollar asset, full stop, because she says it is. Then, after the Republicans roll away their trebuchets, she would not have to sell any new Treasuries and buy back the platinum proof siege coin.

Let's try to grasp then that the proposal to mint such coins is not the province of wackos.  Indeed, Greeley cites Rohan Grey, a professor at the Williamette University School of Law as having "written a thoughtful and exhaustive defence of the coin."  Therein he describes a "constitutional monetary moment" also a chance to debate the very nature of money. In the end, Grey argue (and I concur) "dollars are what Yellen says they are."  They have value because she "demands Americans pay taxes by transferring them back into her department's account at the Fed."  As Greeley adds:

In this view, how Janet Yellen produces dollars is irrelevant. She could just say there are dollars in that account, and they would be there. The US can no more run out of dollars, writes Grey, than a bowling alley can run out of tickets. The coin is a gimmick, then, but it is also a way to be honest about dollars.

This way of thinking about dollars, though, does not really have a way to explain what a Treasury is, other than as an accounting relic. The reason the Republican threat is so powerful, though, is precisely because Treasuries are so valuable.

Naomi Klein (Shock Doctrine) correctly notes that Republicans know deficit and debt fears are overblown, but Democrats seem not to. Hence we see Carter, Clinton, and Obama cleaning up the balance sheet and enabling Reagan, Bush, and Trump to come in, cut taxes and run up debts and deficits.  Like Trump and the Repukes did to the tune of $7 trillion during his 4 -year term in office.  And now these fuckers, at Moscow Mitch's behest - intend to create a financial catastrophe on Dec. 3rd by refusing to raise the debt ceiling-  defaulting for the first time in history, and coinciding with a gov't shutdown.

Progressives have [now] caught on to the game, which is why the trillion-dollar coin (and big spending plans of Bernie Sanders and AOC) resonate with the Democratic base.