"In other words, while nothing is said about the general dynamical laws of the hidden variables, φ, which may be as nonlocally connected as we please, we are requiring that the response of each particular observing instrument to the set φ, depends only on it own state and not the state of any other piece of apparatus that is far away".
This is a critical distinction, because it eliminates the pure objection Einstein had to unlimited nonlocality. Thus, Bohmian quantum physics introduces a measure of locality by tying the action of hidden variables to the particular observing device.

To fix ideas and show differences, in the Aspect experiment four different analyzer orientation 'sets' were obtained. These might be denoted:
(A1,A2)I, (A1,A2)II, (A1,A2,)III, and (A1,A2)IV
Each result is expressed as a mathematical (statistical) quantity known as a 'correlation coefficient'. Aspect's final result (sum) yielded:

What is the significance? In a landmark theoretical achievement in 1964, mathematician John S. Bell formulated a thought experiment based on a design similar to that shown. He made the basic assumption of locality (i.e. that no communication could occur between A1 and A2 at any rate faster than light speed). In what is now widely recognized as a seminal work of mathematical physics, he set out to show that a theory which upheld locality could reproduce the predictions of quantum mechanics. His result predicted that the above sum, S, had to be less than or equal to 2 (S less than or equal 2). This is known as the ' Inequality'.

In the case of  David Bohm's hidden variables, and its deterministic model, the above sum came to less than 2.

The key insight for Bohm was in terms of the evolution (time change) of the probability density:

From the preceding, and a modified  -Jacobi equation,  Bohm deduced that each particle would be acted upon not only by a classical potential but also an added quantum potential Q.

The original proposal[3] by Rietdjik and Selleri was to show that if a photon is successively transmitted by 2 polarizers (using appropriate settings or orientations) then the very first transmission must influence a hidden variable which co-determines the second one. "Malus law" was first formulated by Etienne Louis Malus in 1809 and asserts that the intensity of light transiting an analyzer and polarizer is proportional to cos2(q) where q is the angle through which the analyzer is rotated with respect to the polarizer.
One can proceed by first considering a set-up with 2 orthogonally polarized correlated photons (designated 'g 1' and 'g 2' in the diagram shown below) and these interact with three polarizers denoted A, B and C. 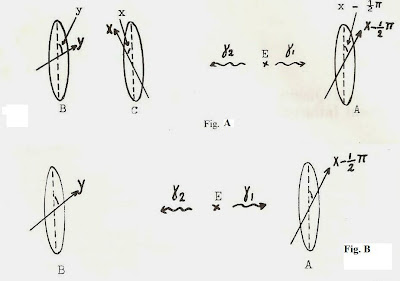 If 'E' is the causal event (e.g. photon departure from location), then by causal determinism one must find:

In other words, the interaction event denoted 'AE' (whereupon the designated photon for  g 1 interacts with polarizer A) occurs before CE and CE before BE.
By appropriate computations one is led to a theorem:
"A deterministic theory with hidden variable φ reproduces Malus' law for a photon (g2) transmitted by two polarizers C and B, with arbitrarily chosen settings of their axes, only if the hidden variable φ undergoes some change (a redistribution) when g 2 crosses the first polarizer.

To refine the experiment, one removes the polarizer C from the top panel set up shown  and defines p1,2(x - p /2, y) to be the probability that, in the new setup g 1 is transmitted by A, and g2 by B.
It is also what paves the way toward validating Bohm's acausal determinism.  How so?
Either one of two propositions must be valid, supporting or refuting a deterministic effect:

1) Transmission across C generates a change in φ and thereby allows transmission through B, or

2) No change transpires with the crossing at C, so none occurs at B (no influence, so null hypothesis)

Using this one can estimate the probability condition by way of summing all orientations, as applicable to the null hypothesis:

Which, of course, violates Malus’ law which predicts:

Using partial derivatives we can move further on this.

And apply the Malus’ law requirement, viz. based on the orientations for axes x, y:


At this point, we briefly review the concepts of max-min theory to do with partial derivatives of functions of several independent variables (say a, b, c etc.)

which has an extreme value (extremum) at x = a. Then if f has a partial derivative with respect to x at x = a, that partial derivative must be zero by virtue of the theory for max-min functions F(x) of a single independent variable., viz.

Of course, since we’ve three polarizer orientations, a, b and c the minima must hold for all, then also we have:

Further computations disclose that we need: